If Iran cheats on the nuke deal, we'll catch them: Obama 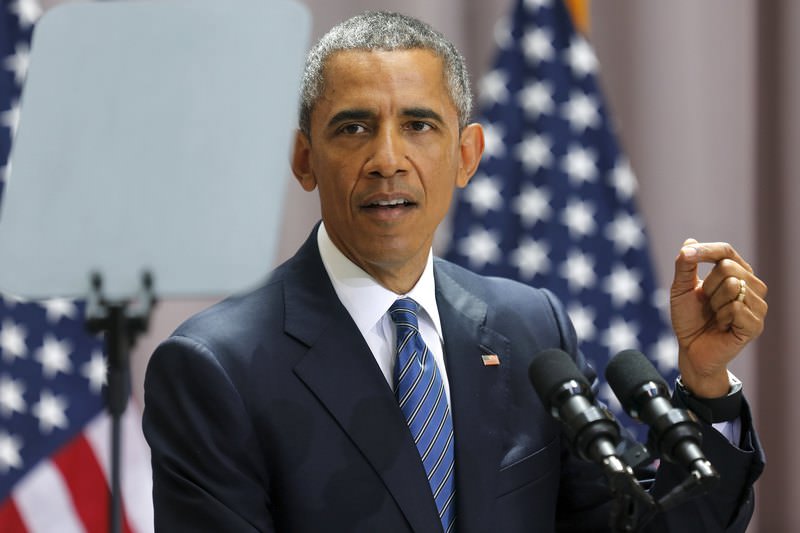 by Aug 06, 2015 12:00 am
President Barack Obama defended the U.S.-led international nuclear deal with Iran on Wednesday against a furious lobbying effort by political opponents and Israel and said abandoning the agreement would open up the prospect of war.

Obama said "Alternatives to military actions will have been exhausted once we reject a hard-won diplomatic solution that the world almost unanimously supports."

He added: "Let's not mince words. The choice we face is ultimately between diplomacy or some form of war. Maybe not tomorrow, maybe not three months from now, but soon."

Obama's speech was part of a push to promote the July 14 agreement between Iran and six world powers put together over 18 months of negotiations. The six agreed to lift economic sanctions on Iran in return for curbs on its nuclear program, which Tehran said was for peaceful energy purposes only.

The White House has pressured Congress to support the deal as they return home for an August recess. To counter an opposition effort that has spent millions on advertisements, Obama asked the audience to contact their representatives and ask them to support the pact.

Congress has until Sept. 17 to vote on the deal. If it passes and survives a presidential veto, a resolution rejecting it would cripple the agreement by eliminating Obama's ability to waive many sanctions.

The leaders of the Senate said they had agreed to begin their recess on Thursday, but start debate on a resolution of disapproval on the Iran deal as soon as they return to Washington on Sept. 8.

Republicans in Congress overwhelmingly oppose the nuclear agreement, saying it does not go far enough to ensure Iran will never be able to develop a nuclear weapon.

Obama urgently needs his fellow Democrats' support in Congress, but only a few dozen have come out so far as strongly in favor.

Some of his fiercest critics in the Republican-led Congress quickly dismissed Obama's arguments.

The Republican Senate Majority Leader, Mitch McConnell, said Obama had insulted both Democrats and Republicans who had questions about the deal by saying Iranian hardliners who opposed the deal were "making common cause with the Republican caucus."

"The president needs to retract his bizarre and preposterous comments," McConnell said in a statement.

Senator Bob Corker, chairman of the Senate Foreign Relations Committee, said lawmakers left a meeting with the International Atomic Energy Agency's chief meant to allay concerns about the deal more worried than when they went in.

"It was not a reassuring meeting," Corker said after the meeting with IAEA Director General Yukiya Amano. The IAEA would undertake much of the monitoring and verification work.

Obama spoke at American University, where Kennedy made the case in 1963 for a nuclear weapons test ban treaty with the Soviet Union. He cited Kennedy, a Democrat, and Republican Reagan in making his case for diplomacy.

"The agreement now reached between the international community and the Islamic Republic of Iran builds on this tradition of strong, principled diplomacy," he said.

Obama called the deal "the strongest non-proliferation agreement ever negotiated."

He acknowledged his administration's split with Israeli Prime Minister Benjamin Netanyahu over the deal. Netanyahu has called the agreement a threat to his country's survival.

"I do not doubt his sincerity, but I believe he is wrong," Obama said.

Presenting himself as having done more than any other president to strengthen Israel's security, Obama said the United States would continue to help Israel keep its military edge.

After the speech, House of Representatives Speaker John Boehner emailed a video link to Netanyahu's March address to Congress against the Iran talks. Boehner said it was a powerful reminder "that the alternative to President Obama's bad deal with Iran is not war. The alternative is a better deal."

"That is repeated over and over again. 'It's a bad deal - we need a better deal,'" he said. "Walk away from this agreement, and you will get a better deal - for Iran."