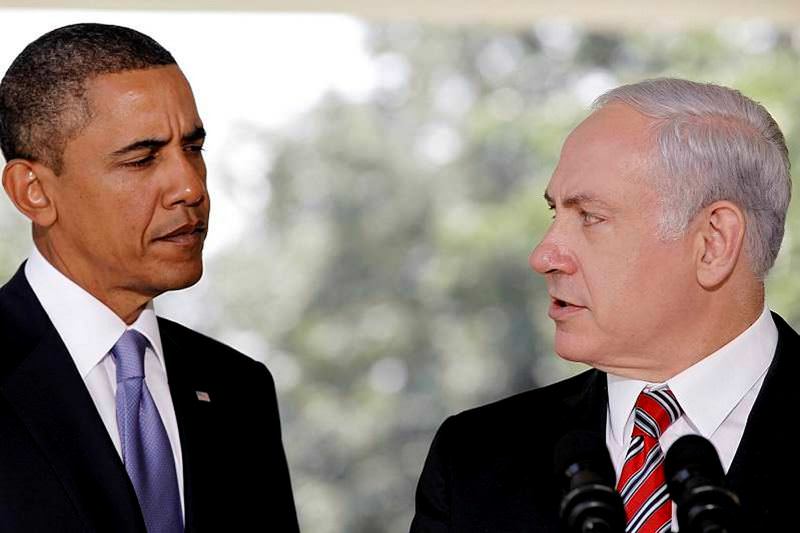 U.S. President Obama (L) and Israeli Prime Minister Netanyahu (R) have long been in dispute over the nuclear deal with Iran.
by Daily Sabah with AP Aug 06, 2015 12:00 am

With the world and U.S. Congress almost split in two on the 12-year overdue Iran deal with world powers, Obama and Netanyahu made competing appeals to the American Jewish community seeking support

U.S. President Barack Obama and Israeli Prime Minister Benjamin Netanyahu made dueling appeals to the American Jewish community Tuesday as they sought to rally support for their opposing positions on the Iranian nuclear deal. Obama met privately for more than two hours with Jewish leaders at the White House, making a detailed case for the nuclear accord and urging opponents including some in the room to stick to the facts in making their own arguments, according to participants. He singled out the tens of millions of dollars being spent by critics, most notably the pro-Israel group American Israel Public Affairs Committee.

The president's meeting came hours after Netanyahu participated in a live webcast aimed at Americans Jews. The prime minister railed against the agreement to curb Iran's nuclear program in exchange for billions of dollars in sanctions relief, calling it a "bad deal" that leaves Tehran on the brink of a bomb. "The nuclear deal with Iran doesn't block Iran's path to the bomb. It actually paves Iran's path to the bomb," Netanyahu said in his remarks. Organizers said about 10,000 people participated in the meeting.

Netanyahu, one of the fiercest critics of the nuclear accord, also disputed Obama's assertion that opponents of the diplomatic deal favor war. He called that assertion "utterly false," saying Israel wants peace, not war. Participants in Obama's meeting with Jewish leaders said attendees who oppose the deal raised with the president their concern over being painted as eager for war. They said while Obama appeared sympathetic to their concerns, he continued to argue that if Congress rejects the agreement, he or the next president would quickly face a decision on taking military action to prevent Iran from obtaining a nuclear weapon.

The back-to-back sales pitches from the leaders came on the eve of a foreign policy address Obama was to deliver as he seeks to bolster support for the deal in Congress. A White House official said Obama would frame lawmakers' decision to approve or disapprove of the deal as the most consequential foreign policy debate since the decision to go to war in Iraq. The official said Obama would also argue that those who backed the Iraq war, which is now widely seen as a mistake, are the same ones who oppose the Iran deal. The official insisted on anonymity because the official was not authorized to preview the president's address by name. Participants in the meeting were also granted anonymity in order to comment on their private discussions with the president.

The White House is preparing for the likelihood that lawmakers will vote against the deal next month and is focusing its lobbying efforts on getting enough Democrats to sustain a veto. Only one chamber of Congress is needed to sustain a veto.

Obama spokesman Josh Earnest said Monday that the White House is confident it can sustain a veto "at least in the House." The president got a boost in the Senate Tuesday with Sens. Barbara Boxer of California, Tim Kaine of Virginia and Bill Nelson of Florida announcing their support for the deal. However, the administration lost the backing of three prominent Jewish Democrats New York Reps. Steve Israel and Nita Lowey and Florida Rep. Ted Deutch. Obama, who has long been criticized for his lack of engagement with Congress, has gotten personally involved in selling the deal to lawmakers and other influential groups. Those who have met with him say he has a detailed understanding of the complex agreement, which is perhaps his top foreign policy priority.

"It was pretty solid evidence of a couple of things: first of all, just how engaged the president is on this issue, and second, how important it is to him," said Andrew Weinstein, a South Florida community leader who attended the meeting. Also among the roughly two-dozen leaders joining Obama in the Cabinet Room were Michael Kassen and Lee Rosenberg of the American Israel Public Affairs Committee, which is vehemently opposed to the deal, as well as Jeremy Ben-Ami of J Street, who is among the deal's most vocal proponents. The White House said representatives from the Orthodox Union, the Reform Movement, the World Jewish Congress and the Anti-Defamation League also attended.

On July 14, Iran and world powers reached a deal in the Austrian capital after marathon talks on Tehran's controversial nuclear program that had poisoned international relations for 12 years. The agreement makes it almost impossible for Iran to build an atomic bomb for several years, in exchange for a gradual lifting from 2016 of international sanctions that have been suffocating the country's economy. While the majority of the world called it a historic deal, Israeli Prime Minister Benjamin Netanyahu blasted that the deal as a "stunning historic mistake" and pointedly noted that his country is not bound by the agreement.
RELATED TOPICS