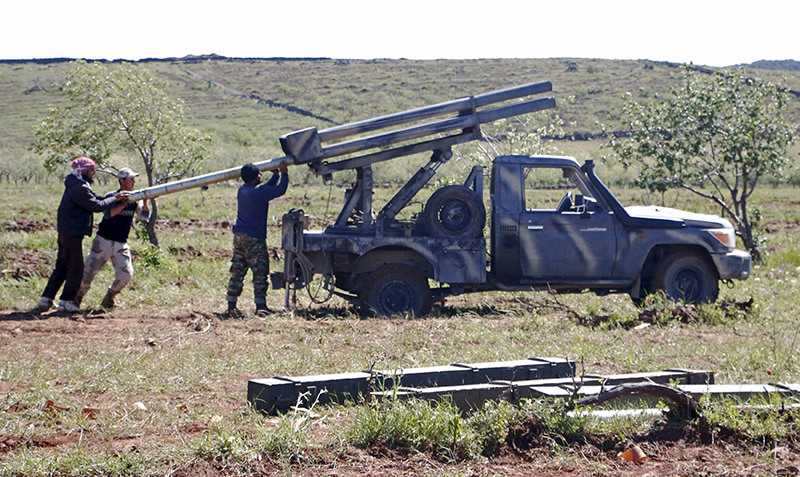 Ahrar al-Sham Islamic Movement prepare to fire grad rockets from Idlib countryside towards forces loyal to Syria's President Bashar al-Assad (Reuters Photo)
by Daily Sabah Aug 11, 2015 12:00 am
Turkey has decided to wipe out the Islamic State of Iraq and al-Sham (ISIS) from northern Syria as it considers the group a threat to its national security. The United States also supports the plan and has declared that the two countries will cooperate to create an ISIS-free zone. One of the main opposition groups, Ahrar Al-Sham, declared its support for the plan after the al-Qaida-affiliated al-Nusra Front rejected Turkish-American cooperation in the area.

The U.S. has long rejected Turkish and other requests for a no-fly zone to halt Syrian government air raids, fearing it would draw U.S. forces further into the civil war. Turkish warplanes started striking militant targets in Syria last week, following a long-awaited agreement allowing the U.S. to launch its own strikes from Turkey's strategically located İncirlik Air Base.

It was controversial how the other opposition groups in the area would react to the idea of ISIS-free zone. Al-Nusra Front rejected cooperation with Turkey against the group. In a statement released by the organization on Sunday, the Turkish-U.S. plan to drive ISIS militants from the Syrian-Turkish border area has been criticized, saying the aim was to serve "Turkey's national security," claiming that the no-fly zone plan aims to prevent the establishment of a Kurdish state on its southeastern border, rather than to fight President Bashar Assad. "Facing this current scene, our only option was to withdraw and leave our frontline positions [with ISIS] in the northern Aleppo countryside for any fighting faction in these areas to take over," al-Nusra Front said. Reportedly, fighters from the organization commenced withdrawing from the villages of Hiwar Kalas, Shmareen, and Bragheed - east of Azaz - along with its bases in Azaz on Wednesday evening after a meeting between representatives of the group and the main Syrian opposition factions operating in the area. It is known that the organization is at war with ISIS in several parts of Syria. The organization declared in the statement that they would maintain the frontlines in ISIS areas including in Hama province and the Qalamoun mountain range near the border with Lebanon.

Free Syrian Army (FSA) commanders have also given support to Turkey as the group mostly suffers from ISIS attacks during its battle against the regime. Another opposition group Ahrar al-Sham declared its support for the plan yesterday in a statement. In the statement, released on its official Twitter account, the group said, "The Ahrar al-Sham movement sees that what Turkey has declared about its intention to establish a safe zone in northern Syria is very advantageous for the Syrian people, and is a necessity for the national security of Turkey, and to stop the terrorist and separatist projects of ISIS and the PKK, and stresses that the safe zone would reflect positively on the political and humanitarian situation of both countries." Underlining that the opposition groups have long been in favor of the plan, the statement said: "Establishing the safe zone has been in popular demand since the start of revolution in Syria. The delay in this project caused the death of tens of thousands of Syrians and caused more damage to the infrastructure in the country."

Accordingly, the Islamic Ahrar al-Sham movement supports establishing the safe zone in northern Syria, with the support of Turkey, and cooperation with other rebel groups. It is also considering a lively project to enhance the humanitarian situation in northern Syria, and is enabling refugees to go back to their homes and stand against the enemies of the revolution," the statement read. The group also highlighted the good relations between the people of the two countries and said, "Ahrar al-Sham also stresses on the crucial and organic bond between the Syrian and Turkish people, which makes the strategic relationship between us [Syria] and Turkey one of the essential elements in facing the current challenges and shaping the future of Syria."

Touching on the sectarian policies of the Syrian regime and Iran, the statement said "At the same time, we call on all other armed rebellious movements for more cooperation and solidarity at the whole country level because the challenge and threat is not restricted to any region apart from others, as the Syrian regime has revealed its true intentions toward dividing Syria on a sectarian basis and giving it away to Iran. Therefore, we all have to stand up for the responsibility and build for the ambitions of our people at this crucial turning point in the history of our revolution."

It is known that Ahrar al-Sham and ISIS are at war since the second group emerged as an independent power in Syria. The intensifying tension between the two groups led to clashes at the last weekend and, reportedly, as many as 100 fighters, loyal to Ahrar al-Sham, were killed by ISIS in Umm Hawsh near Turkish border. The biggest blow by ISIS to the group was on last October when ISIS militants killed 21 Ahrar al-Sham commanders through placing sarin gas in a meeting room. It was known that Ahrar al-Sham is one of the strict opponents of ISIS and accuses ISIS of undermining the Syrian revolution through declaring war on other opposition groups that are fighting against the Syrian regime, headed by President Bashar al-Assad.

Ahrar al-Sham was one of the first armed groups that emerged to topple the regime and has been one of the best organized. It was founded in Hama and Idlib in early 2011 by former Islamist political prisoners and Iraq war veterans held in the Sednaya Prison north of Damascus after their release from jail in early 2011. The founders had a Salafist understanding of Islam but, as opposed to ISIS, were at peace with the traditions of people and other groups like the Sufis. The group has never been a part of the Western-backed FSA, but has also not refused to ally with them.

The group never became a branch of al-Qaida either through consistently stating that their battle is limited to Syria. Ahrar al-Sham also sought to ally pragmatically with all groups fighting Assad's government, including al-Qaida's Nusra Front and Western-backed FSA factions.
The group fought against Hezbollah, a Shiite faction allied with the Syrian regime, although there was no anti-Shiite rhetoric at the beginning. Officials had vowed to protect minority rights including those of Christians and members of several other beliefs.