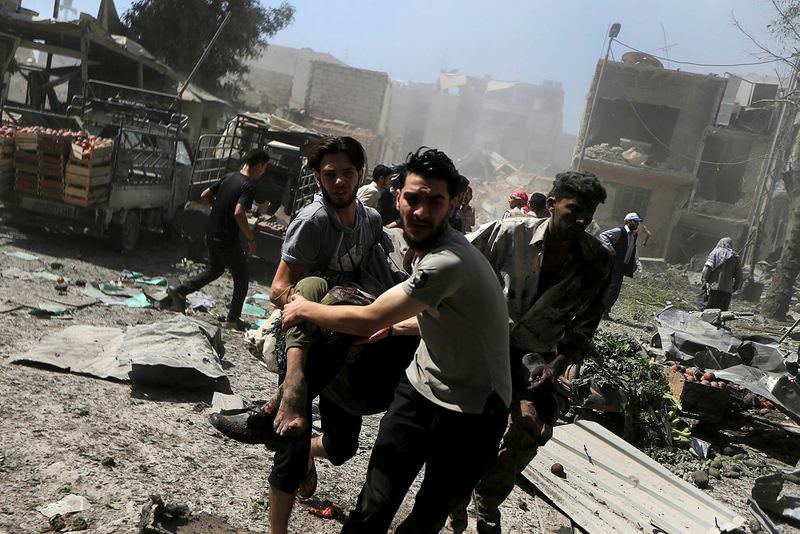 Hours before a visit by Iranian Minister of Foreign Affairs Zarif to Damascus aimed at finding a peaceful solution to end the war, the regime shelled a market place in a rebel-held area in the suburbs of Damascus, leaving at least 31 dead

Iranian Minister of Foreign Affairs Javad Zarif arrived in Damascus yesterday to hold peace talks with Syrian President Bashar Assad, who has lost legitimacy in the eyes of millions of Syrians as well as several regional and international actors, including Turkey and the U.S. After meeting with Hassan Nasrallah, the head of the Lebanon-based Shiite militant group Hezbollah, Zarif held talks with Syrian officials. Iranian officials told the Islamic Republic News Agency that Zarif is to finalize the peace plan to end the war in Syria. However, hours before his visit, the Syrian air force shelled a market place in rural parts of Damascus, killing at least 31, according to a monitoring group.

In his meeting with Nasrallah, the war in Syria was on the table. "The Iranian minister said resistance and peaceful coexistence among divine religions play a constructive role in establishing peace and boosting development in the region. The resistance movement has restored dignity to Lebanon and the region, and has led to respectful coexistence among all Lebanese tribes and groups," Press TV reported.

Zarif was expected to pay a visit to Turkey on Tuesday. Yet the visit was postponed due to President Recep Tayyip Erdoğan not giving an official appointment. It is alleged that several developments affected Erdoğan's decision, including Iran's Syrian policies, criticizing Turkey's operations against the PKK, sectarian policies of the country in the region and a smear campaign in which Turkey is accused of supporting the Islamic State of Iraq and al-Sham (ISIS).

Iran supporting Assad and pursuing policies to trigger sectarian clashes in the region is shown as the main reason for rising tensions in Turkish-Iranian relations. Turkey accuses Iran of being involved in the war in Syria and mobilizing several Shiite groups, especially Hezbollah, against the people of Syria.

"Government airstrikes around Syria's capital on Wednesday killed at least 36 people and wounded scores more in a surge in violence just hours before the arrival of Zarif," the Associated Press reported. The British-based Syrian Observatory for Human Rights reported that government warplanes attacked several rebel-held suburbs of the capital. It added that the airstrikes killed at least 31 people and wounded more than 120 people. According to the monitoring group, rebel groups shelled the capital before the warplanes pounded civilian areas. Meanwhile, a 48-hour truce was declared between warring parties in Syria near the Lebanese border where Hezbollah fights on behalf of the Syrian regime.

Although Iran claims to be seeking a peaceful solution to end the war, it is well-known that dozens of Iranian troops fight in Syria against the opposition groups. Moreover, Hezbollah is involved in the war as the regime's land army has been largely dissolved. Iran, which purportedly pursues a sectarian policy in the region, is backed by Russia which is in a proxy war with the U.S. over both the crisis in the Middle East and Ukraine. On Tuesday, Iranian and Russian naval forces staged an array of war drills. "Iranian and Russian naval forces on Tuesday staged a series of war drills in the waters near northern Iran, in another joint show of force meant to display the two nations' control of nearby waterways. An Iranian destroyer and team of Russian warships staged a series of war drills and engaged in joint training exercises, according to reports in Iran's state-controlled press," freebeacon.com reported. The strong military cooperation shows that there will be no change in Iranian policy towards the Syrian crisis.
Last Update: Aug 13, 2015 1:03 am
RELATED TOPICS