Thousands of Iraqis demonstrate in support of government reforms 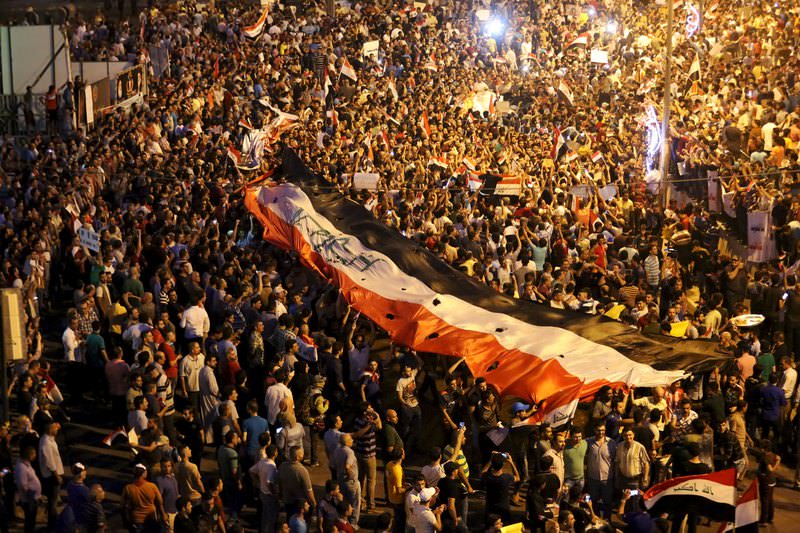 People shout slogans during a demonstration to show support for Iraqi Prime Minister Haider al-Abadi at Tahrir Square in central Baghdad, August, 9, 2015. (REUTERS Photo)
by Associated Press Aug 14, 2015 12:00 am
Thousands of people demonstrated in cities across Iraq on Friday to show support for a reform plan put forth by the Iraqi Prime Minister Haidar al-Abadi this week that aims to target corruption and curb reckless government spending.

People sang, chanted and played music at the demonstrations, the largest of which were in the cities of Baghdad, Babel, Basra and al-Kut. They waved Iraqi flags and banners showing their support for the first of several reform measures from Prime Minister Haidar al-Abadi.

"With our souls and our blood, we sacrifice for you, oh Iraq!" they chanted.

On Sunday, al-Abadi responded to the demands of protesters and a call by the country's most revered Shiite cleric for change. His plan, unanimously approved by parliament Tuesday, eliminates the three vice presidencies and the three deputy prime minister posts. The reforms also expand the powers of the prime minister, allowing him to sack provincial governors and the heads of provincial and local councils.

Most of those gathered in Baghdad's Tahrir Square and elsewhere in the country said Iraq's problems are far from resolved. The demonstrators continued to call on the government to improve basic services, particularly the electricity grid. Chronic power outages amid searing summer heat had spurred the latest round of protests two weeks ago. They also demanded that the government take a tough stance on the corrupt judiciary.

In his sermon Friday, Grand Ayatollah Ali al-Sistani said repairing the judicial system was the most important step toward true reform.

"It is an important milestone in the completion of the reform package and there is no real reform process without it," he said through spokesman Abdul-Mahdi al-Karbalaie.

In response, al-Abadi released a statement late Friday calling on the judiciary to carry out a series of "drastic measures" to "ensure the prestige of the judiciary, its independence and its ability to fight corruption."

Protesters say much of the country's domestic problems have been sidelined as a result of the war with ISIS, and that senior government officials are turning a blind eye to problems that have plagued Iraq for decades. Many of the country's political factions turned against al-Abadi's predecessor, Nouri al-Maliki, largely because they saw him as a domineering leader who monopolized power and allowed widespread corruption. Critics say al-Maliki staffed the military's officer corps with incompetent loyalists, playing a major role in the army's collapse in the face of the ISIS advance.

The extremist group currently holds territory in about a third of Iraq and Syria and has established a self-described "caliphate."

Meanwhile, local authorities in Iraq's western Anbar province said government airstrikes destroyed a women and children's hospital in ISIS-held territory near the city of Fallujah. The Anbar provincial council said Iraqi warplanes were targeting ISIS militants in the village of Nassaf, 2 kilometers south of Fallujah, when the hospital there was hit on Thursday.

It called on the Iraqi defense ministry to accept responsibility for the attack and to exert caution when targeting areas with high civilian populations.

A senior official overseeing operations at several Fallujah-area hospitals said at least 22 women and children were killed. He spoke on condition of anonymity because he was not authorized to talk to reporters.

A spokesman for the Iraqi defense ministry, Yahya Rasool, on Friday rejected claims of the airstrike. He said Iraqi troops do not target hospitals, schools or other civilian facilities, even if they are occupied by militants.

Aamaq, an ISIS-affiliated news agency, posted an online video late Thursday purportedly showing the aftermath of the attack on the hospital, with men, women and children covered in blood, bandages and scars. The Associated Press could not independently verify the video.
Last Update: Aug 15, 2015 2:23 am
RELATED TOPICS