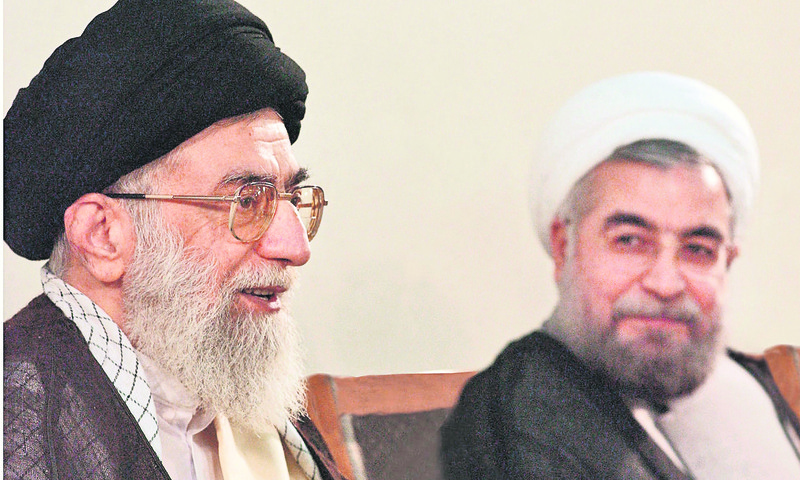 A newspaper close to Iranian Supreme Leader Khamenei claimed that the religious leader is disappointed with the deal and reluctant to approve it, while the government is determined to lose the sanctions

Well-known Iranian hardliner Hossein Shariatmadari, the managing editor of the Kayhan newspaper, which is considered Iranian Supreme Leader Ayatollah Ali Khamenei's mouthpiece, wrote on Saturday that the supreme leader opposes the nuclear deal, while the Tehran administration is keen to fulfill the deal's requirements. Iran's Supreme Leader Ayatollah Khamenei is opposed to the landmark nuclear deal reached with the world powers, he claimed. Touching on the significance of the comments, "It was the first time someone publicly claimed where Khamenei, who has the final say on all state matters, stands on the deal," the Associated Press said. Although the supreme leader has declared his support for the nuclear negotiators, he has never publicly approved or disapproved the deal. Yet, considering his position in Iranian politics, it seems impossible to reach a nuclear deal without his private approval. Iran's parliament and the Supreme National Security Council will consider the agreement this week. The deal seeks to limit Iran's nuclear program in exchange for lifting economic sanctions.

Shariatmadari said in the editorial that many parts of the deal threaten Iran's independence, security and "the sacred system of the Islamic Republic of Iran" and would be "disastrous" if implemented. He also referred to a speech by Khamenei last month during which the ayatollah said, "Whether this text is approved or disapproved, no one will be allowed to harm the main principles of the (ruling) Islamic system," AP reported. The editorial noted: "Using the phrase 'whether this text is approved or disapproved' shows his lack of trust in the text of the deal. If his excellency had a positive view, he would not have insisted on the need for the text to be scrutinized through legal channels. ... It leaves no doubt that his excellency is not satisfied with the text."

Another prominent hard-liner and Khamenei representative, Ayatollah Ahmad Alamolhoda, recently was quoted by AP as saying that the deal "crossed the red-lines." He said Khamenei said outsiders should never be allowed access to Iran's security apparatus, but the deal violated that by allowing the inspection of military sites.

Last week Reuters in a report, said: "For a man with the title of supreme leader, Iran's Ayatollah Ali Khamenei has been noticeably unwilling to claim the credit for a nuclear deal that marks a turning point in the history of the Islamic Republic. At first sight it appears a curiously reticent stance for the man who wields ultimate power in Iran and gave political cover to President Hassan Rouhani in 2013 to pursue talks with world powers including Tehran's old enemy, the United States." The report further claimed that "[But] powerful factions in Iran still dislike the agreement, and there is no guarantee it will succeed. The complex deal could also be derailed by a combative U.S. Congress or fall apart at some point down the road."Should that happen, anyone who supported compromise with the West could face a career-ending backlash inside Iran." Isa Saharkhiz, former deputy Minister of Culture was quoted by the news agency as saying: "Ayatollah Khamenei's silence is calculated. He is weighing up the situation. He is standing cautiously somewhere in the middle, so no one can interpret his words as approval or disapproval."

In a letter to Rouhani published on Khamenei's website, the supreme leader wrote, "The successful end of the nuclear negotiations is a significant step, but the text should be carefully scrutinized and the legal procedures should be taken so when it is ratified the other side cannot breach it."

However, the Iranian government is in favor of the deal. Iranian Foreign Minister Mohammad Javad Zarif, who was conducting the talks with the Western powers, following reaching a deal, said: "The effect of this will be, when we implement our measures there won't be any sanctions against the Islamic Republic of Iran. And I think that will be a major step forward. We have stopped a cycle that was not in the interest of anybody, not in the interest of non-proliferation. We have built mutual distrust in the past. … So what I hope is that through courageous implementation of this, some of that trust can be remedied."

The nuclear talks in Lausanne, Switzerland, between the P5+1 (the five permanent members of the U.N. Security Council and Germany) and Iran produced a framework to curb Iran's nuclear program that could allow Tehran to regain lost ground in the oil market. By ensuring that the sanctions imposed on Iran remain untouched until Western powers are satisfied with Tehran's adherence to the conditions of the agreement and giving negotiators until June 30 to hammer out a comprehensive agreement, the deal does not offer much of a chance for an increase of Iranian oil sales until 2016. U.S. and EU sanctions will be lifted after the International Atomic Energy Agency verifies that "Iran has taken all of its key nuclear-related steps," and if Iran fails to fulfill the commitments, the sanction will be put back into effect, according to the statement released by the negotiating countries. The framework accord offers Iran more than $110 billion a year with the dropping of sanctions and a return to the global market. The framework includes limits on Iran's enrichment of uranium for 10 years. Iran agreed to reduce the number of installed uranium enrichment centrifuges to 6,104 from 19,000 and will operate only 5,060 of them for 10 years, according to a U.S. fact sheet.

Ayatollah Khamenei is known for his tough stance against the U.S. and Sunni countries in the region, including Saudi Arabia and Turkey. The sectarian policies of Iran in Iraq, Syria, Lebanon, Yemen and Bahrain are attributed to the effective role of religious leaders, especially Khamenei, in politics. The Western community also considers the supreme leader as an obstacle for amending relations with Iran as religiously motivated policies harm relations. Khamenei became supreme leader following the death of Ayatollah Ruhollah Khomeini, who led the revolution to overthrow the pro-Western shah in 1979. Without becoming a charismatic leader, Khamenei is compelled to follow balanced politics within the country.
RELATED TOPICS