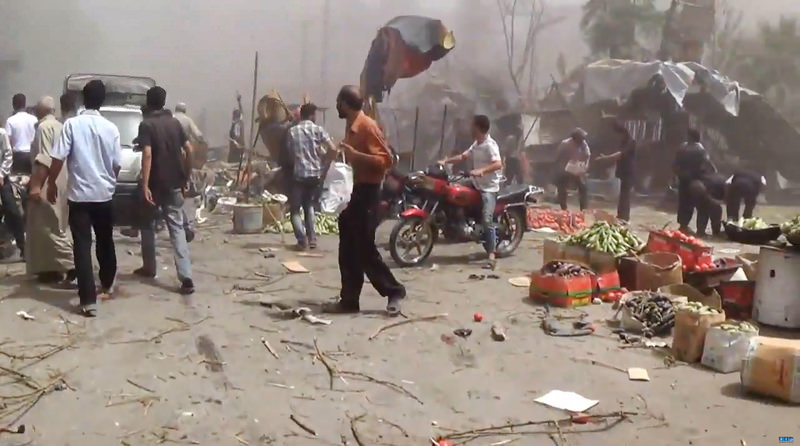 by Daily Sabah with DPA Aug 18, 2015 12:00 am
Assad regime warplanes attacked the Damascus suburb of Douma on Monday as the death toll from airstrikes on a market in the same area the previous day reached 96, a monitoring group said.

The Syrian Observatory for Human Rights said 240 people were wounded in Sunday's attack on the market in Douma.

"Attacks on civilians are unlawful, unacceptable and must stop. I am particularly appalled about reports of yesterday's airstrikes, causing scores of civilian deaths and hundreds injured, right in the centre of Douma," a top UN humanitarian official said in Damascus as he ended a three-day visit to Syria. 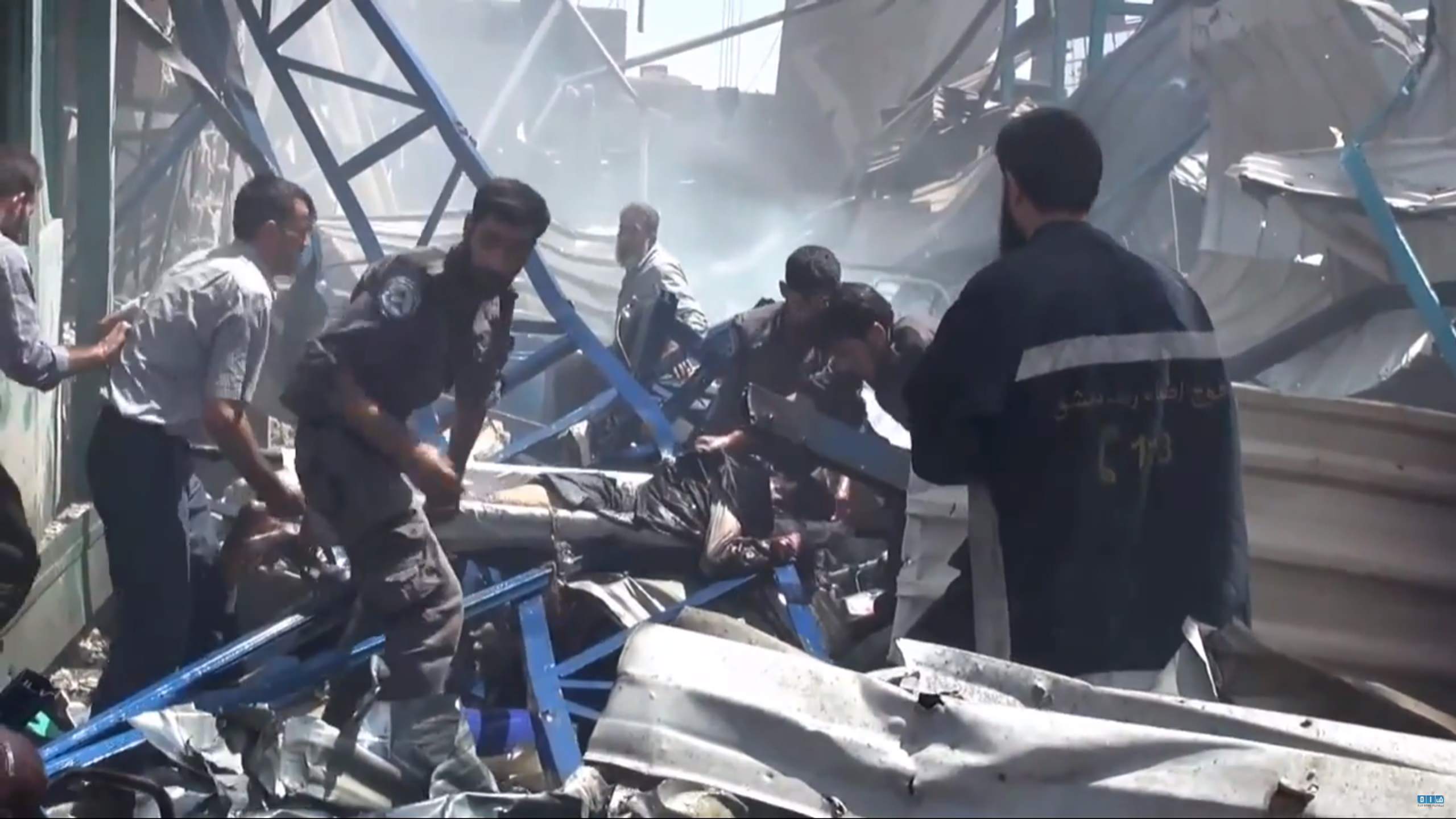 "I am horrified by the total disrespect for civilian life in this conflict," said Stephen O'Brien, the under secretary general for humanitarian affairs and emergency relief coordinator.

The UN envoy for Syria, Staffan de Mistura, said: "Hitting crowded civilian markets killing almost 100 of its own citizens by a government is unacceptable in any circumstances."

The UN condemned the shelling by rebels of Assad regime-held central Damascus. It also criticized the armed groups who have cut off water supplies to the capital in retaliation for a government offensive against the town of Zabadani near the Lebanese border.

The United States also condemned the aistrike on the market saying it was "just another reminder of the inhumane acts perpetrated daily" by the regime of Syrian dictator Bashar al-Assad, said Ned Price, spokesman for the National Security Council.

In New York, the UN Security Council endorsed a plan by de Mistura to move forward with solving the political crisis in Syria by setting up intra-Syrian working groups. 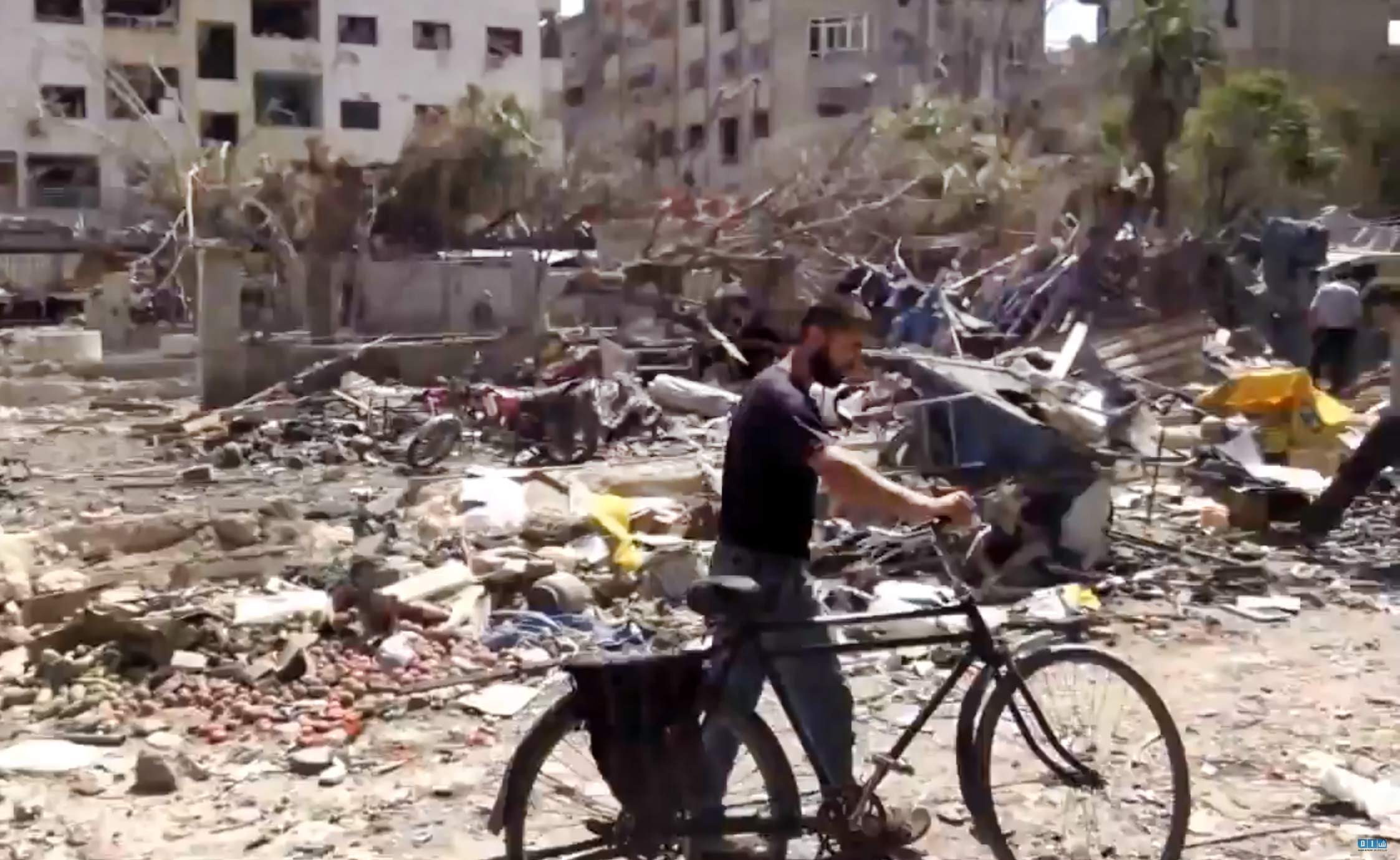 In the first-ever statement dealing solely with the political process in Syria, the council said it supports de Mistura's approach calling for topics to be addressed "through more focused consultations and discussions with the Syrian parties in four thematic working groups."

The four areas are protection and safety; political and legal issues; counterterrorism; and reconstruction and development.
The non-binding statement also demands that all parties work towards "a Syrian-led political process leading to a political transition that meets the legitimate aspirations of the Syrian people."

The statement came as a rare instance of agreement between veto-wielding members Russia and the United States over Syria. However, Venezuela, a non-permanent member of the council, signaled its disagreement and dissociated itself from the statement.

Venezuelan UN ambassador Rafael Dario Ramirez Carreno said Venezuela did not agree with certain parts of the statement because they "violate the sovereignty and right to self-determination of the Syrian people in promoting a political transition." 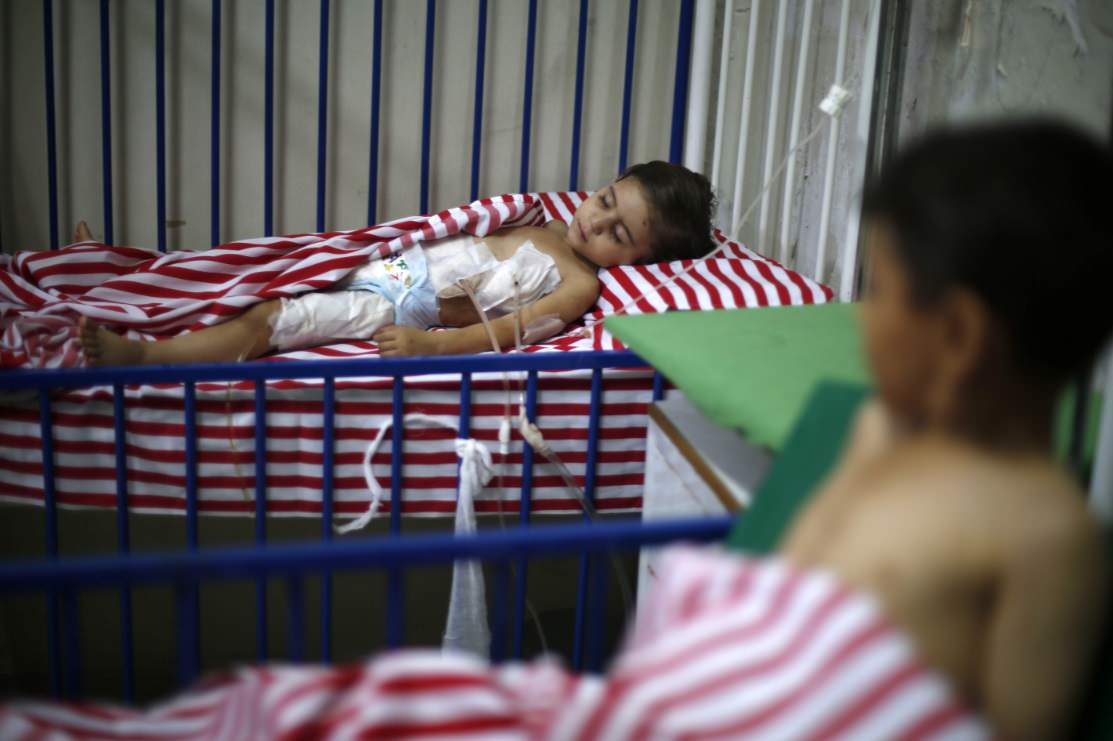 In addition to the Doumo attack, the Syrian coastal city Latakia, a stronghold of the dictator's regime, was shelled Monday, killing three people and 19 injuring, the Britain-based Observatory reported. A similar attack on Latakia last week killed two people and injured 14.

Syria's coastal region, the heartland of al-Assad's Alawite sect, has largely been spared the brunt of the war and shelters many people displaced from other areas by the conflict.
The Observatory said that warplanes also struck the nearby town of Irbin in Eastern Ghouta, a rebel stronghold on the outskirts of Damascus.

Eastern Ghouta has frequently been targeted in deadly airstrikes by the regime forces.

Syria's conflict, which started in 2011, has led to at least 250,000 deaths, according to UN estimates. More than half the country's pre-war population of 22.4 million has been internally displaced or fled abroad.
Last Update: Aug 18, 2015 1:43 am
RELATED TOPICS