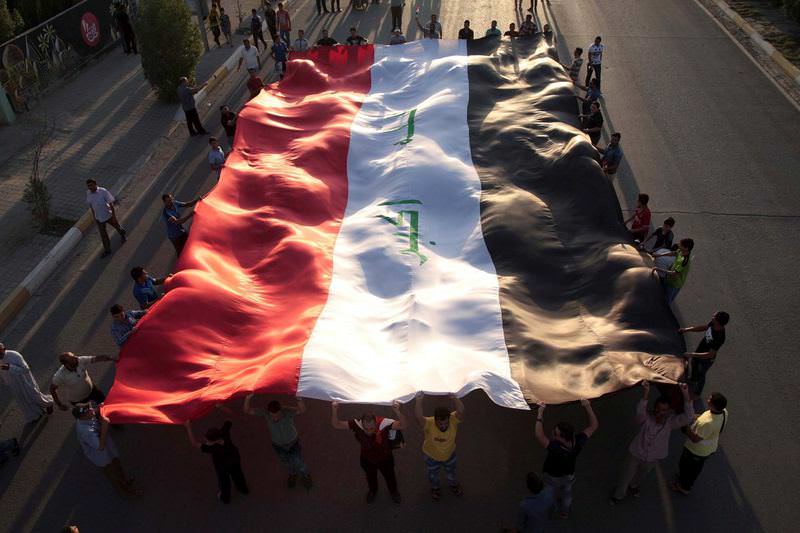 Hundreds of Iraqis attend street protests, demanding more radical reforms by the government to stop corruption.
by Daily Sabah with Wires Aug 19, 2015 12:00 am

Amid national protests against corruption and for a better government, Iraqi Prime Minister al-Abadi seeks to prevent corruption by drastically reducing the number of cabinet members

Iraq's Prime Minister Haider al-Abadi on Sunday ordered his Cabinet reduced from 33 members to just 22, consolidating the body as part of a major reform push in response to mass protests against corruption and poor governance. The decision, announced by his office, would eliminate four ministries, including those of human rights and women's affairs, and consolidate others. The announcement did not mention whether there would be any changes to the remaining ministries. The move follows a far-reaching reform plan approved by parliament last week that eliminated the country's three vice presidencies and three deputy prime ministers. The plan also reduced the budget for the personal bodyguards of senior officials and transferred it to the interior and defense ministries.

Earlier Sunday, Parliament Speaker Salim al-Jabouri said lawmakers would release a report later this week implicating senior officials in the fall of Mosul. He said the report "will document an important and dangerous phase of the history of modern Iraq." "No one is above the law and the accountability of the people," al-Jabouri said in a statement. "The judiciary will punish perpetrators and delinquents."

The reform plan cut positions held by a number of prominent Iraqi politicians, including Nouri al-Maliki, who was prime minister of Iraq for eight years before he was pushed out last August in response to growing outrage over the fall of Iraq's second largest city, Mosul, to Islamic State of Iraq and al-Sham (ISIS). Al-Maliki will be implicated in the report, along with more than two dozen other officials, including army chief Babikar Zebari and Atheel al-Nujaifi, the governor of Ninevah province, where Mosul is located, according to a lawmaker who declined to be identified as he is not authorized to brief the media.

Iraqis have held massive protests in recent weeks against corruption and poor government services, focusing in particular on power outages that have made a recent heat wave even more unbearable. In response, al-Abadi proposed the first round of reforms targeting reckless spending on government officials. Iraq's top Shiite cleric, Grand Ayatollah Ali al-Sistani, has lent his support to demands for reform, and parliament unanimously approved the wider reform package last week in a dramatic show of unity for a country riven with sectarian and political rivalries. Those reforms dismantled much of the top-heavy government erected in the years after the 2003 U.S.-led invasion that toppled Saddam Hussein. The three vice presidencies, one of which was held by a-Maliki, were intended to give equal representation to the country's Shiite majority and Sunni and Kurdish minorities.

Al-Abadi's seven-point plan would also require that a number of government posts be filled with political independents, a move aimed at combatting endemic corruption in Iraq's political system, in which many senior appointments are determined by party patronage and sectarian loyalties. As well as removing the senior posts, Abadi called for an end to sectarian and party quotas for government positions, the reopening of corruption investigations and the reassignment of officials' security details to the ministries of defense and interior. A year after assuming office following the ISIS rapid advance across northern and western Iraq, al-Abadi is still struggling to combat a the extremist group. But he is now also facing a wave of discontent with government services. Iraqis have been suffering through a brutal heat wave with frequent power cuts, leading to mass protests even among the Shiite majority, from which the government draws most of its support. Al-Abadi's plan would reduce spending on personal bodyguards for officials and transfer the responsibility to the Interior and Defense Ministries, which would have their budgets expanded. The plan also calls for the review of all corruption cases by a committee of experts, with fresh trials for officials suspected of wrongdoing. Hours after announcing the plan Sunday, the cabinet started an extraordinary meeting to discuss the protesters' demands and the plans put forth by al-Abadi. It remains unclear how much support the plan will receive from the country's political parties.

The judicial system of the country also faces problems. Iraq's judicial authority on Monday rejected calls for the country's most senior Supreme Court judge to resign from his post, even though it was among the demands of protesters who took to the streets last week calling for widespread government reforms. Abdul-Sattar Bayrkdar, the spokesman for the Supreme Judicial Council, said council members rejected calls for Judge Medhat Mahmoud "to retire." The council is Iraq's highest legal authority, composed of experts in civil law and Islamic law, or Sharia, and it appoints Supreme Court judges. "The public interest and justice at this stage require him to stay in his duties," Bayrkdar's statement said.
RELATED TOPICS