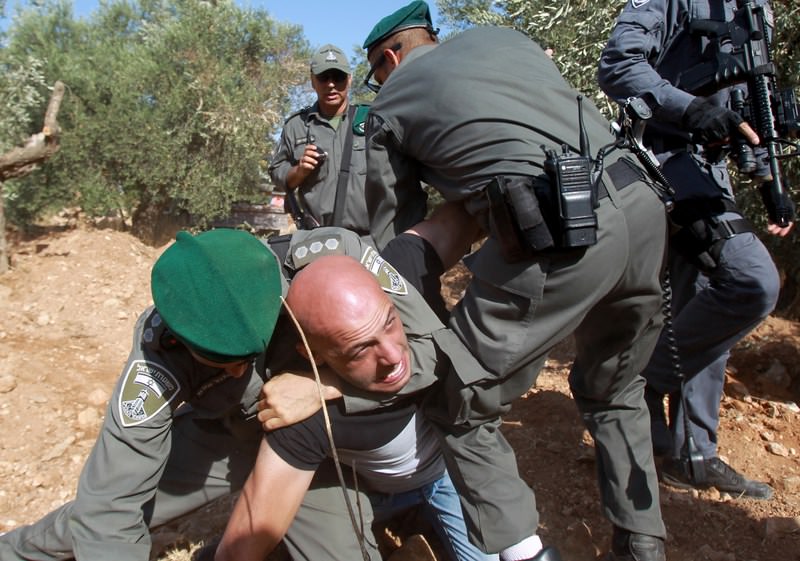 by Aug 19, 2015 12:00 am
Palestinians Christians scuffled with Israeli border police near Bethlehem Wednesday after dozens of them, including priests, gathered to protest renewed work on Israel's West Bank separation barrier in a sensitive Christian area.

An AFP journalist said the protesters, who were joined by a few foreign activists, gathered in the Christian town of Beit Jala to protest building a stretch of the barrier, which started Monday after years of legal battles.

The three Roman Catholic priests tried to pray among olive trees that bulldozers and mechanical diggers were seeking to uproot but were stopped by police.

One demonstrator was arrested as he tried to plant an olive sapling in front of the excavators.

Police wrestled with protestors who chanted," Israel is a terrorist state. It doesn't scare us."

Israel began building the barrier of walls and fences inside the occupied West Bank in 2002 at the height of the second Palestinian intifada (uprising), saying it was crucial for security.

The Palestinians see it as a land grab aimed at stealing part of their future state and call it the "apartheid wall."

U.N. figures show that around two-thirds of the barrier is so far complete.

The network of towering concrete walls, barbed-wire fences, trenches and closed military roads will extend 712 kilometers (442 miles) when finished, separating the West Bank from Israel, 85 percent of its length running through Palestinian land.

One of the most iconic symbols of the occupation, it will cut off more than nine percent of Palestinian territory in the West Bank and Israeli-annexed east Jerusalem from the majority, in places separating farmers from their fields or villagers from water sources, the U.N. says.

Where it approaches Beit Jala and the adjacent Cremisan Valley there has been fierce opposition from the local Palestinian Christian community, which has enlisted papal support.

The case grabbed special attention when the wall was slated to separate Cremisan monastery from the neighboring convent and vineyards.

It would have also separated Palestinians in the nearby Christian village of Beit Jala from their olive groves.

Israel's High Court ruled in April that the work must stop and told the government to consider alternative routes.

But, in a new decision on July 6, the court said work could go ahead, ruling that the previous ban referred only to an area of a few hundred meters (yards) alongside the monastery and the convent.

The people of Beit Jala were surprised Monday when Israeli bulldozers started uprooting olive trees east of the convent and monastery.

They are protesting against the confiscation of their land and the fragmentation of their lives and also fear that the path of the wall may herald expansion of the nearby Israeli settlements of Gilo and Har Gilo.

Settlements in occupied territory are illegal in the eyes of the international community.

In a non-binding decision, the International Court of Justice ruled in 2004 that construction of the barrier was illegal and, like the U.N. General Assembly demanded that it be dismantled.
Last Update: Aug 19, 2015 10:19 pm
RELATED TOPICS