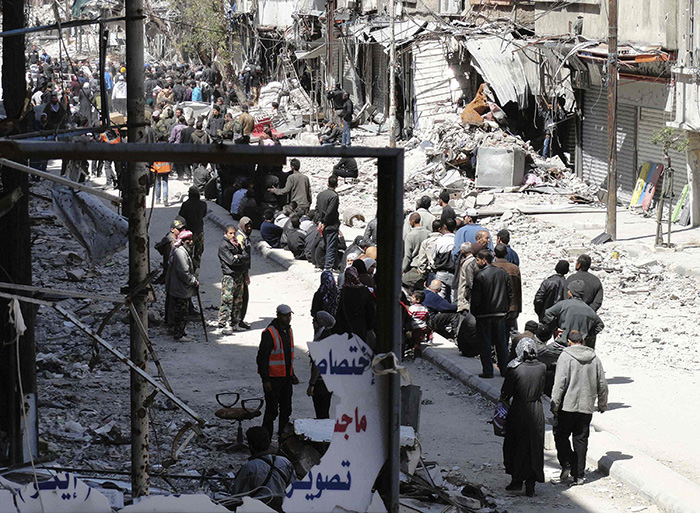 Residents wait to receive food aid distributed by the Al-Wafaa campaign at the Palestinian refugee camp of Yarmouk, south of Damascus April 1, 2014 (Reuters Photo)
by Aug 19, 2015 12:00 am
Typhoid has broken out among residents of the Yarmouk Palestinian refugee camp in Syria, the United Nations said on Wednesday, warning of further disease outbreaks because of the appalling conditions there unless aid reaches the camp.

Six cases of typhoid were confirmed by the U.N. agency for Palestinian refugees (UNRWA), which gained access to residents from the Yarmouk camp for the first time since June in nearby Yalda, where it carried out more than 200 medical consultations.

Typhoid is contracted by drinking or eating contaminated matter and symptoms include nausea, fever, and abdominal pain. Untreated, the disease can lead to complications in the gut and head which can kill up to one in five patients.

"Our concern is that these typhoid cases only represent the tip of the iceberg, because the erosion of health services and appalling public health standards create a massive, massive risk of diseases breaking out," said UNWRA spokesman Chris Gunness.

"The situation is desperate, and suffering may be far more widespread and intense inside the camp," Gunness told the Thomson Reuters Foundation by phone from Jerusalem.

The camp, set up close to Damascus in 1957 to house Palestinian refugees, has become a symbol of the desperate plight of people in rebel-held territory since the Syrian government laid siege to it in 2013.

ISIS terrorists attacked the camp in April but withdrew soon afterwards having largely defeated their rival, Aknaf al Maqdis, leaving the al Qaeda-affiliated Nusra as the biggest force in the camp.

Fighting in and around the camp has left some 18,000 refugees, including 3,500 children, without food, water and medical supplies and prompted aid agencies to urge the warring parties to allow access for aid and evacuations.

More than 95 percent of Palestine refugees in the camp rely on the U.N. agency to provide them with daily supplies of food, water and healthcare, according to Gunness.

"Women are dying in childbirth due to a lack of medicine, children are reduced to eating grass because there is no food, and the main water supply hasn't been functional since last September," Gunness said.

"Never has the imperative for sustained humanitarian access been greater."

The Yarmouk camp was home to some 160,000 Palestinians before the Syrian conflict began in 2011, refugees from the 1948 war of Israel's founding, and their descendants.