Yemen on edge of famine from ongoing conflict, UN warns 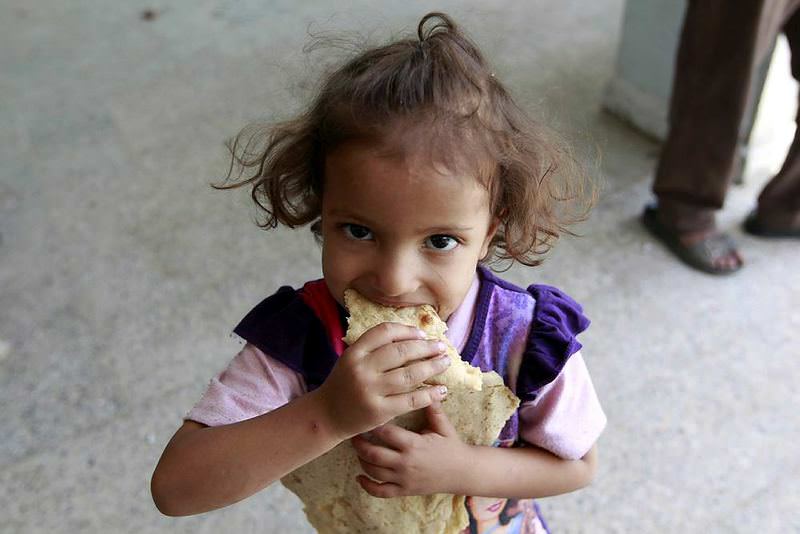 A displaced Yemeni child who fled Saada province with her family due to clashes eats bread as the U.N. warns of developing famine.
by Daily Sabah Aug 21, 2015 12:00 am

The conflict in Yemen has pushed the country to the brink of famine as food imports and aid deliveries have been held up by the fighting and millions of women and children may face starvation, the United Nations said on Wednesday. The U.N. and aid groups have called repeatedly for ways to get food, fuel, medicine and other supplies into Yemen, but tight restrictions imposed by the coalition on air and sea transport remain in place, while Yemen's exiled government accuses the Shiite Houthi rebels of hijacking aid.

The U.N. World Food Programme (WFP) estimates that the number of food insecure people in Yemen is now close to 13 million. A shortage of drinking water is a critical issue. The price of water in Sanaa had tripled since the start of the conflict because pumping systems have been hit by the lack of diesel fuel. Water is critical for families to prepare food and has an impact on people keeping livestock, which is very important for livelihoods in the country. "Right now, the conflict-driven convergence between the lack of staple food, access to clean water and a diminished fuel supply create the dawn of a perfect storm for the most vulnerable Yemeni people. The damage to Yemen's next generation may become irreversible if we don't reach children quickly with the right food at the right time. We must act now before it is too late," WFP Executive Director Ertharin Cousin said. "The scale of human suffering is almost incomprehensible. I'm shocked by what he saw: Four out of five Yemenis are in need of humanitarian assistance, nearly 1.5 million people are internally displaced, and people were using cardboard for mattresses at a hospital where lights flickered, the blood bank had closed and there were no more examination gloves," U.N. humanitarian chief Stephen O'Brien, said.

The new UNICEF report said that nearly 10 million children, or 80 percent of the country's under-18 population, are in need of immediate humanitarian aid. It also said that more than half a million pregnant women in Yemen's hardest-hit areas are at higher risk for birth or pregnancy complications because they cannot get to medical facilities. In the last six months UNICEF has provided psychological support to help more than 150,000 children cope with conflicts. "The conflict is a particular tragedy for Yemeni children" Julien Harnies, UNICEF representative in Yemen, said.

The WFP said it has reached 3.5 million people with food since the beginning of the conflict but the fighting makes deliveries difficult and dangerous. In 2014, the WFP conducted a comprehensive food security survey that found 10.6 million people are food insecure. Some 5 million of those are severely food insecure, unable to buy or produce the food they need, and 5.6 million people are moderately food insecure. The organization is seeking financial support for a $320 million emergency operation program it expects to launch in September. The situation in Yemen is characterized by large-scale displacement, civil conflict, food insecurity, high food prices, endemic poverty, diminishing resources and influxes of refugees and migrants. The U.N.'s humanitarian office said that over 21 million people, about 80 percent of the population, are in need of help. More than 1.2 million children are suffering from moderate acute malnutrition and over half a million children are severely malnourished. Over 1.3 million people have been forced to flee their homes, U.N. says.

The Saudi-led U.S.-backed alliance continues to pound Houthi targets as part of Operation Decisive Storm, which was launched on March 26, to halt the Houthis advance. The coalition includes Bahrain, Egypt, Jordan, Kuwait, Morocco, Qatar, Sudan, and the United Arab Emirates, who have conducted numerous airstrikes throughout Yemen against Houthi forces. Operation Decisive Storm ended on April 21 and immediately afterwards, Operation Restore Hope was launched by the Saudi-coalition. The intense fighting has come with a heavy toll on the civilian population in an already fragile humanitarian situation. More than 1,000 civilians have died as a result of the conflict, and more than 300,000 have been displaced, according to U.N. figures. More than 250,000 refugees in Yemen were caught up in the ongoing conflict, becoming victims of war.

The capital Sanaa has been under Houthi rebel control since September last year. Since then, Iran-allied Shiite Houthis have made significant gains while taking northern Yemen. They have been expanding their territory, clashing with President Abd Rabbuh Mansour Hadi's loyalists, local tribes and radical groups including al-Qaida on the Arabian Peninsula (AQAP), which also pose a significant security threat to the country's political stability.

The country has long suffered from political instability and insecurity due to threats posed by various militant groups. Since former President Ali Abdullah Saleh stepped down in 2012, ending his 33-year rule, the country has been in a state of constant turmoil. In addition to clashes between government forces and Houthi militants, the rival militant groups, al-Qaida and the Houthi rebels, have fought a bloody battle to gain control over several places.
Last Update: Aug 21, 2015 1:22 am
RELATED TOPICS