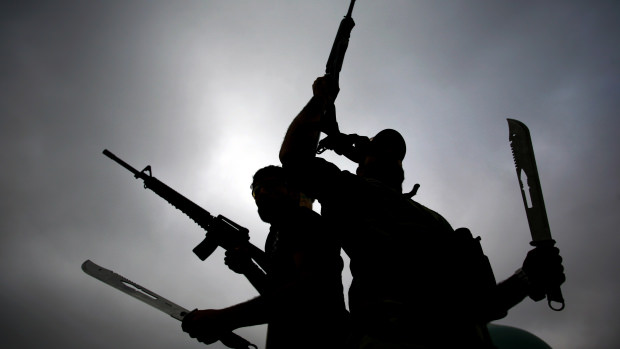 ISIS militants (pictured). (AFP Photo)
by Associated Press Aug 22, 2015 12:00 am
A top provincial official in Iraq's Anbar province says up to 50 soldiers have been killed by ISIS terrorists in two separate ambushes in the turbulent region west of Baghdad.

Sabah Al-Karhout, president of the Anbar Provincial Council, told The Associated Press on Saturday that the ambushes took place Friday west of the provincial capital, Ramadi.

He had no more details and there was no immediate word from authorities on the violence.

Defense Minister Khalid al-Obeidi on Saturday toured the army's command in Anbar. During a meeting with troops there, a Defense Ministry statement said al-Obeidi counseled that forces must use "caution and precision" when advancing to avoid "unjustified losses."

The ISIS group controls about a third of Iraq, including much of Anbar.
Last Update: Aug 23, 2015 8:04 pm
RELATED TOPICS