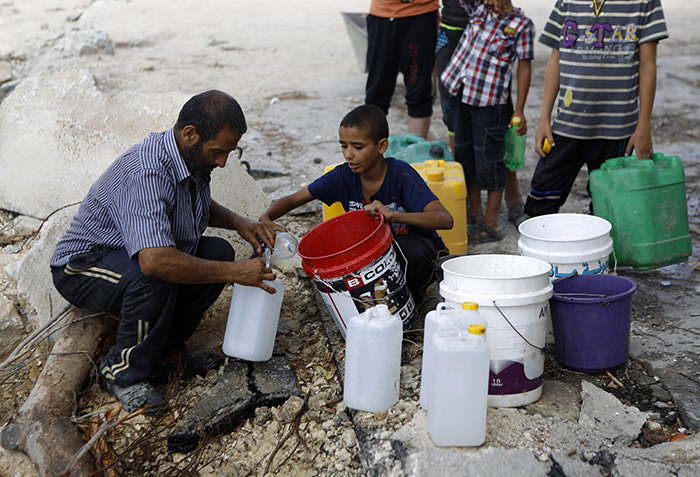 A Palestinian man and children fill containers with water from a broken main in Gaza City's al-Shejaea neighborhood on August 6, 2014 (AFP Photo)
by Anadolu Agency Aug 26, 2015 12:00 am
Palestine's Coastal Municipalities Water Utility (CMWU) has said that some 120,000 people in the blockaded Gaza Strip lack drinking water as a result of infrastructure damaged during Israel's 55-day assault on the territory last year.

"Twenty-three percent of the Gaza Strip's population is not connected to the sanitation network," the utility said in a statement issued Tuesday.

The CMWU, which oversees the provision of drinking water and public sanitation in most parts of the beleaguered strip, described the current situation as "extremely dangerous".

According to the utility, problems in the water and sanitation sectors had cost the enclave $34 million.

"Ninety-six percent of underground water is not fit for human consumption, forcing residents to buy water, which costs them about a third of their income," the CMWU noted.

The utility went on to note that the eight-year-old Israeli-Egyptian blockade of the territory had contributed to the Gaza Strip's worsening water crisis and hindered numerous development projects.

Since 2007, the Palestinian enclave has groaned under a joint Israeli/Egyptian blockade that has deprived its roughly 1.9 million inhabitants of most basic goods, including food, medicine and building materials.

In July and August of last year, Israel carried out a 51-day offensive against the Gaza Strip with the ostensible aim of halting Palestinian rocket fire.

Over 2,160 Palestinians were killed in the onslaught-mostly civilians-while hundreds of homes and broad swathes of infrastructure were reduced to rubble across the territory.
Last Update: Aug 26, 2015 9:43 am
RELATED TOPICS