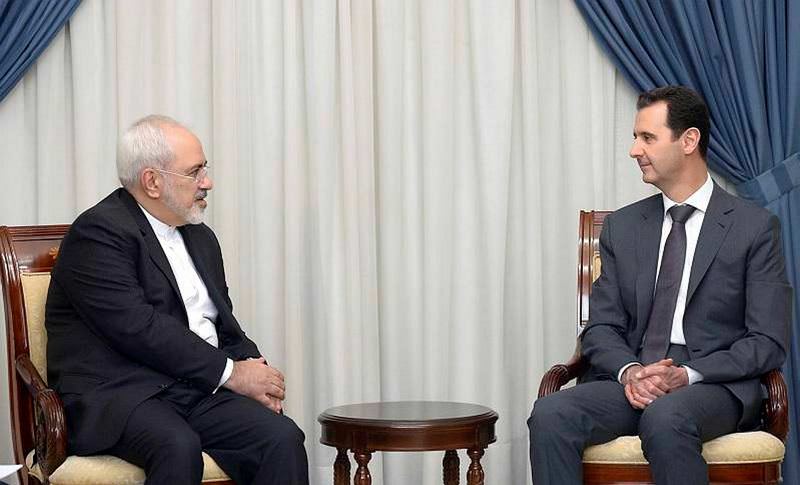 Iran renewed its support for Assad in the meeting between Assad (R) and Iranian Foreign Minister Javad Zarif (L) in Damascus two weeks ago.
by Daily Sabah Aug 27, 2015 12:00 am

In an interview, Syrian President Bashar Assad said he was confident of Iranian and Russian support, defended the presence of Hezbollah and claimed that rebels are more dangerous than Israel

In an interview broadcast late on Tuesday, Syria's Bashar Assad, who is fighting rebels and international pressure to leave his post, praised the support from Iran and Russia to save his regime. Describing the importance of the support as "beyond loyal," he said: "We have strong confidence in the Russians, as they have proven throughout this crisis, for four years, that they are sincere and transparent in their relationship with us. … They [Russians] are principled, while the United States abandons its allies, abandons its friends. This was never the case with Russia's policy, neither during the Soviet Union, nor during the time of Russia."

Touching upon Iranian support, he said: "The power of Iran is the power of Syria, and a victory for Syria is a victory for Iran. We are on the same axis, the axis of resistance." On joining an alliance against the Islamic State of Iraq and al-Sham (ISIS) with the initiative of Russia, he accused regional actors of backing terrorists, referring to Turkey and Saudi Arabia. Assad said his government would be open to combating ISIS as part of an alliance, but added, "states that stood with terrorism would be the states that will fight terrorism." "A small possibility remains that these states decided to repent, or realized they were moving in the wrong direction, or maybe for reasons of pure self-interest, they got worried that terrorism is heading toward their countries, and so they decided to combat terrorism," Assad said. "We have no objection. The important thing is to be able to form an alliance to fight terrorism," he said.

The interview was broadcasted by Lebanon-based Shiite militant group Hezbollah's Al-Manar TV. Hezbollah fights against rebel groups in Syria along with Iranian troops and other small groups that are loyal to the regime. Assad defended the presence of Hezbollah militants in the country and said that his government legitimately requested their help. "The presence of non-Syrian fighters among the Syrian army was no justification for the presence of foreign fighters in the ranks of the rebels," he said. In response to a question comparing Hezbollah fighters with foreign fighters who fight in rebels' ranks, he said: "There is a big difference. The Syrian state requested the assistance of Hezbollah. It was a request by the Syrian state, which is a legitimate state, in order to help defend the Syrian people."

He also responded to Israeli attacks on Syria that happened last week that killed more than 10 people. Accusing the rebels of being "servants of Israel," he said: "The real tools that Israel is using, which are more important than the recent attacks, 'they' are the terrorists in Syria. If we want to deal with Israel, we must first deal with its proxies inside Syria." He further claimed that the rebels were more dangerous than Zionists.

While the civil war that began in 2011 has killed more than 250,000 people, in less than two weeks the regime has killed more than 250 in the suburbs of Damascus alone. Millions of Syrians have been internally displaced and millions others have fled to neighboring countries. The war's effects have spilled into the whole region as it has deepened political crises in Lebanon, has been threatening Turkey's border security, has led to ISIS advances in Iraq, and also an unprecedented migrant crisis in the Balkans.
RELATED TOPICS