Soldier should have been able to kill her, Israeli culture minister says 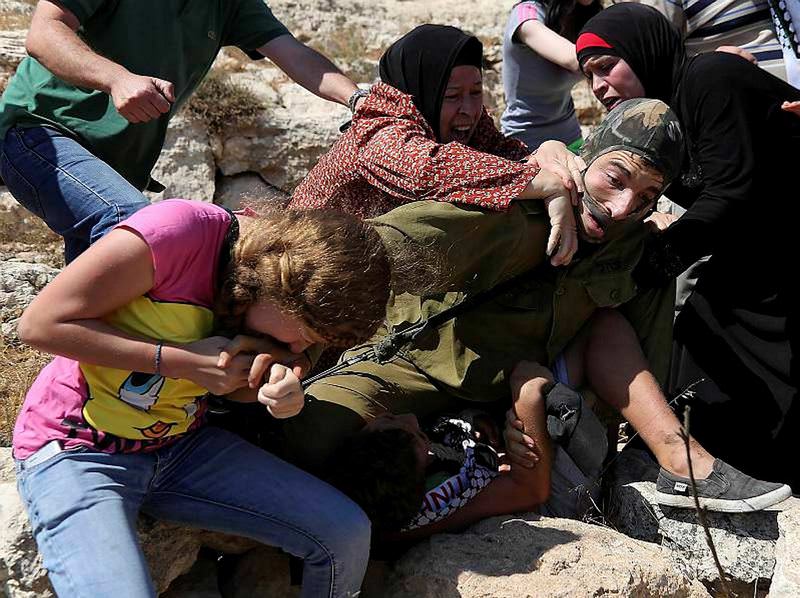 Family members, including the boy's mother and sister, struggle with soldier to save the 12-year-old boy whose arm was in a cast.
by Yusuf Selman İnanç Sep 01, 2015 12:00 am

A video that went viral across the world for showing family members save a little boy from an Israeli soldier has angered an Israeli minister who suggested that the soldier should have been able to fire at the boy's sister, who was honored by President Erdoğan for her courage against Israeli troops in 2012

A video that shows a family's struggle with an Israeli soldier to save their son, whose arm was broken, from being detained sparked outrage across the world and shed light on Israel's military policies in the occupied territories. In the video that was recorded by the boy's father, a masked Israeli solider is seen holding a 12-year-old boy in a chokehold in an attempt to arrest him. The soldier is swarmed by family members in an attempt to save the boy. The family members, including the mother and sister, slap and pull the soldier's uniform. The people around the soldier were heard shouting "let him go, he is a little boy, his arm is broken." For minutes the soldier struggled with the family until another Israeli soldier came to assist him. Finally the soldier releases the boy and angrily throws a stone. "The original video, which was provided to the Associated Press (AP) by its creator, local activist and the boy's relative Bilal Tamimi, showed the same footage. Tamimi said Palestinians had hurled stones at the troops, but that he hadn't seen the boy throw stones, though photos broadcast on Israeli TV seemed to show the boy hurling a stone," AP reported.

The incident took place in Nabi Saleh on Friday at a protest, largely attended by Palestinian youth. Protesters and Israeli soldiers frequently clash at the same area as Israel's illegal settlements spill into the Palestinian villages, blocking the roads. Israeli Defense Forces said in a statement that a "violent riot" erupted and accused the little boy of hurling stones. The boy was released "to prevent an escalation of violence," the statement added.

While several media outlets, rights groups and thousands of activists criticized the soldier's action, Israeli media claimed that detaining the little boy was self-defense. A man who appeared on Israel's Channel 2 identified himself as the soldier's father and said he was proud of his son. Yet, "This is very difficult for any father or mother to see their son or daughter in that way, being violently attacked," said the boy's father.

While the aggressive statements from Israeli officials and comments from residents of illegal settlements were considered normal in the conflict zone, the words spoken by Israeli Culture Minister Miri Regev were shocking as she suggested that the soldier should have killed the boy's sister A'hed Tamimi. She called for the military to adopt a new policy that would have allowed the soldier to shoot the Palestinians who scuffled with the soldier. "I was shocked to see the video this morning of Palestinians hitting an IDF soldier. It cannot be that our soldiers will be sent on missions with their hands tied behind their backs. It's simply a disgrace! We must immediately order that a soldier under attack be able to return fire," she said in a Facebook statement. "Anyone who tries to harm Israeli civilians and soldiers needs to know his blood is in his head," Regev continued, using a Hebrew expression to convey that the Palestinians who assaulted the soldier should have been killed.

The boy's father said his son was receiving medical treatment and made a call to the international community to raise their voices against Israeli aggression. He has also been detained by Israeli soldiers before.

The sister A'hed Tamimi was known by the international media as she bravely resisted against an Israeli soldier in 2012 when her father was detained. She was invited to Turkey and honored by President Recep Tayyip Erdoğan for her courage.
Last Update: Sep 01, 2015 9:05 am
RELATED TOPICS