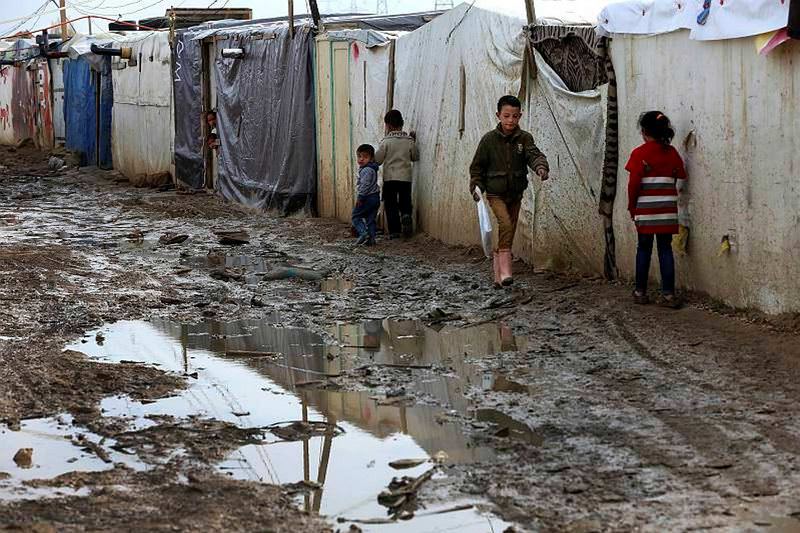 Since the refugee crisis, caused by conflicts in North Africa and the Syrian war, turned into a humanitarian catastrophe, leaving a burden to be shared by regional and international powers, Gulf countries have come under harsh criticism for not accepting a single refugee

King Salman of Saudi Arabia and U.S. President Barack Obama met on Friday to discuss recent developments in the Middle East. The war in Syria and the nuclear deal with Iran were discussed. It was the first visit by the king since he ascended to the throne last January. The main topic was the nuclear deal with Iran about which the Riyadh administration expressed concern as Saudi Arabia and Iran are considered to be in a proxy war in Syria and especially in Yemen. While a Saudi-led coalition operates in Yemen to restore the elected and internationally recognized government, Iran explicitly gives support to the Houthi rebels. The two countries are at the heart of the sectarian tension in the region since Iran pursues a policy prioritizing a Shiite presence in the governments of Iraq, Yemen and Lebanon and supporting the Syrian regime. The Obama administration has assured Saudi Arabia, one of its main allies, that the deal will not strengthen Iran in the region. Although the king and the president focused on Iran, Saudi Arabia and other oil-rich Gulf countries have been harshly criticized by thousands of social media users over not taking any refugees from Syria.

A photo of a little drowned Syrian boy, found on Turkey's Bodrum coast, has sparked international outrage. While the EU and the U.S. were criticized for imposing harsh measures to receive the migrants, the anger has also turned to the Gulf countries. According to the official numbers, the Muslim countries in the region, except Iran, which supports the Syrian regime and calls the opposition "terrorists," have received millions of refugees. Lebanon has accepted at least 1.2 million while Jordan has received more than 600,000 Syrians. Egypt accommodates at least 130,000 refugees and the conflict-torn Iraq houses around 250,000 Syrians. Turkey has imposed an open-door policy for refugees. According to recent U.N. figures, Turkey hosts nearly two million Syrian refugees who have fled the civil war in Syria which has been continuing for over four years in 25 camps built by the Prime Ministry of Disaster and Emergency Management Authority (AFAD). The camps have received several awards and been praised by international visitors for their efforts in providing sustainable services. The largest camp is in the border town of Suruç, located in the southeastern province of Şanlıurfa, which opened in February 2015 and hosts nearly 25,000 refugees.

The attempts of the refugees to cross Mediterranean Sea to reach European Union countries have turned into a humanitarian catastrophe. The International Organization for Migration (IOM) estimates a third of a million people have crossed the Mediterranean so far this year, leaving from Libya, Turkey and other countries to land in Europe. The number of migrants to have arrived Europe so far this year (200,000) is so minor that it constitutes just 0.027 percent of Europe's total population of 740 million. So the argument that the world's richest continent cannot easily handle such a comparatively small influx compared to its population seems quite preposterous. "In the first six months of this year, more than 2,350 would be migrants have died off the North African country's coast while trying to reach the shores of Europe. According to IOM, the number stood at 2,081 for the same period last year. Yet despite these grim statistics, over 255,000 migrants and refugees have successfully made the voyage to Europe by sea so far this year, the IOM says. Of these, nearly 100,000 came from war-torn Syria, more than 25,000 from Eritrea, and some 32,000 from violence-wrecked Afghanistan, according to IOM figures," Anadolu Agency reported. The number of refugees reaching the EU's borders reached nearly 340,000 during the first seven months of the year, up from 123,500 during the same period in 2014, according to the European Union's border control agency Frontex. The Frontex said that it had detected some 107,500 people arriving outside regular channels in July, a sharp increase on the previous record set in June of over 70,000, and more than three times as many as it registered in the same month last year. Frontex officials were not immediately available to comment on how far the increase in numbers being detected may be a result of increased monitoring of the frontiers. Other EU data shows 625,920 people claimed asylum in the bloc last year. Germany attracted 43 percent of Europe's 400,000 asylum applications in the first half of the year, more than double the number in the same period of 2014. German Chancellor Angela Merkel called on EU member states to shoulder a greater share of responsibility for refugees. Germany is expecting to receive 800,000 asylum applications by the end of the year, four times the number of last year. The U.K. has been always considered as the altar of immigrant, but contrary to this perception, in 2014, only 25,870 people sought asylum in the U.K., the world's fifth-largest economy (and second-largest in Europe after Germany), and just 10,050 of the asylum seekers were accepted. Germany, on the other hand, accepted 97,275 refugees in 2014. Also France plans to build a camp next winter for as many as 1,500 migrants in the northern port city of Calais where twice that many are living in tents and hoping to make the sea-crossing to Britain.

Gulf countries are also considered part of the conflicts in the region. Saudi Arabia leads the tiny countries and determines their policies toward regional developments. These countries occupy the top positions in the lists of richest countries. Their societies enjoy the wealth brought by oil. While trying to be part of the wars in the region through supporting some radical elements in Syria and carrying out airstrikes in Yemen, they avoid sharing the burden. None of the Gulf countries has received a single refugee from Syria.

The Gulf countries have been repeatedly criticized over violating human rights. Their societies are known for their negative stance on foreigners as several reports revealed that workers from several countries, including Pakistan, Sri Lanka and the Philippines face daily discrimination. The United Arab Emirates (UAE), which is the main business center of the Gulf, poses an example. UAE citizens live in prosperity - the country's GDP is higher than many Western and developed countries, especially in per capita terms. According to the CIA fact book, the UAE's GDP (adjusted for purchasing power parity) was $269.8 billion in 2013 while its GDP, based on official exchange rates, was $390 billion. For such a tiny country with its population of 6 million, of which only 1.4 million are citizens, such figures are relatively high.

The UAE is also open to all kinds of people from around the world, as long as they come to do business. Yet, for the others who come to work in the country, the conditions are not in accordance with their wealth. Many reports on the conditions of foreign workers have been released and in many of them the UAE has been slammed over its inability to provide sufficient humanitarian conditions for the workers. The UAE, especially Dubai, where labor unions are banned, has long faced criticism from human rights groups who say it turns a blind eye to cases of the non-payment of wages, lack of medical care and sub-standard housing for workers. Construction workers in the booming Gulf trade hub, which is building the world's tallest tower and man-made islands, have long complained about poor working conditions. The UAE government in 2008 revised the labor laws to include requirements that employers pay for migrant workers' travel, employment permits, medical tests and health care. It also closed down some workers' camps that do not meet health and safety standards in a crackdown on firms abusing foreign workers. But New York-based watchdog Human Rights Watch said a UAE draft labor law fell far short of international standards for the rights of workers.

The current policies and societal customs indicate that the Gulf will not change its stance in favor of taking refugees or seeking a solution for the regional crisis as Saudi Arabia's main concern is the rise of Iran as a decision-maker if the sanctions are lifted and gain the right to penetrate the oil market, since the country has large oil resources.
RELATED TOPICS