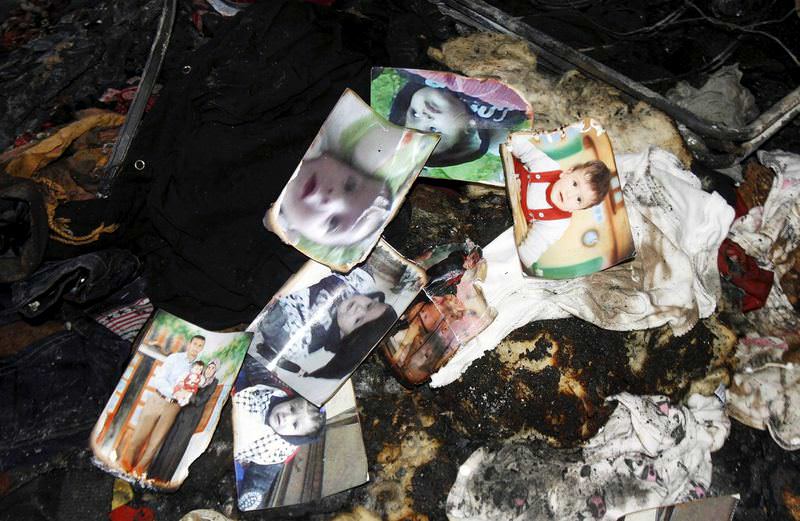 Photos of a one-and-a-half year old boy, Ali Dawabsheh, lie in a house that had been torched in an arson attack by Jewish settlers.
by Daily Sabah Sep 07, 2015 12:00 am

Reham Dawabsheh, the mother of the 18-month-old Palestinian toddler Ali Dawabsheh who was burned alive, has died five weeks after being seriously wounded in an arson attack. She had suffered third-degree burns and was in a coma for five weeks. Sa'ad Dawabsheh, the father of the Palestinian toddler, died of his injuries on Aug. 8. Also, the 18-month-old toddler's 4-year-old brother, Ahmed Dawabsheh, suffered second-degree burns on more than 60 percent of his body.

On July 31, the toddler was killed at dawn after suffering severe burns following the firebombing of his home by Jewish extremists in Duma, a village near the northern West Bank city of Nablus. The suspects entered Duma where they set the home ablaze and scrawled graffiti, including "Long live the Messiah," "revenge" and "price tag." The Palestine Liberation Organization (PLO) said Prime Minister Benjamin Netanyahu's government is "fully responsible" for the death of the Dawabshehs. Regarding the arson attack, at a meeting with Palestinian Authority President Mahmoud Abbas, Arab foreign ministers agreed to call on the U.N. to protect the Palestinians from "terrorist crimes" by Jewish settlers.

Jewish extremists have for years attacked Palestinian property, as well as mosques, homes, churches and even Israeli military bases for what they see as the Israeli government's favorable policies toward Palestinian. Attacks in the last two months have seen many Palestinians killed while others were left disabled.

On Sept. 1, Israel arrested Palestinian activist Basil al-Tamimi, the father of 12-year-old Mohamed al-Tamimi, who was beaten by an Israeli soldier during an Aug. 28 demonstration in the occupied West Bank. Over the video that showed a masked Israeli soldier violently attacking a 12-year-old Palestinian child, Israeli Minister of Culture Miri Regev made controversial remarks against the women and other children attempting to save the boy from the soldier. Regev said in a Facebook post that the soldier should have been able to open fire on the women and children who came to rescue the 12-year-old boy from the armed and masked Israeli soldier.

A streak of Palestinian killings has rocked the West Bank in the last two months. On July 22, Mohammed Ahmed Alauna, 21, was shot and killed by Israeli security forces in the West Bank village of Burkin, located west of Jenin. On July 23, the Israeli Defense Forces (IDF) shot dead Faleh Hamed Zamel Abu Maria, 53, during an operation in the West Bank village of Beit Ummar. On July 26, Muhammed Abu Latifa, 18, was shot by Israeli security forces during an arrest raid at Qalandiya refugee camp in the West Bank. On Aug. 15, Rafeq Hmad al-Taj, 21, was shot and killed and another was wounded during what Israeli authorities said were two knife attacks on troops in the West Bank. On Aug. 17, another Palestinian, Muhammed Amsha, 25, was shot dead by Israeli police after he lightly wounded one of them at a military checkpoint in the occupied West Bank, a police spokeswoman said.

On July 30, Israeli bulldozers began demolishing a contested housing complex in a West Bank settlement as the Israeli Prime Ministry's office announced the "immediate construction" of some 300 new units at another location in the same settlement and advanced plans for about 500 new units in east Jerusalem.

According to Peace Now Israel, the Israeli settlement watchdog group, Israel approved 1,065 housing units at end of the July in occupied territories, drawing criticism from the international community. U.N. Secretary-General Ban Ki-moon condemned the announcement of the construction of the new units. Ban urged Israel's government to halt and reverse such decisions "in the interest of peace and a just final status agreement." The U.S. State Department said it was deeply concerned by the new settlement activity and urged "the Israeli government to refrain from unhelpful actions that undercut the possibility of a two-state solution." Germany also criticized Israel for approving the construction of more than 1,000 units in the occupied West Bank, terming the move a threat to the two-state solution.
RELATED TOPICS