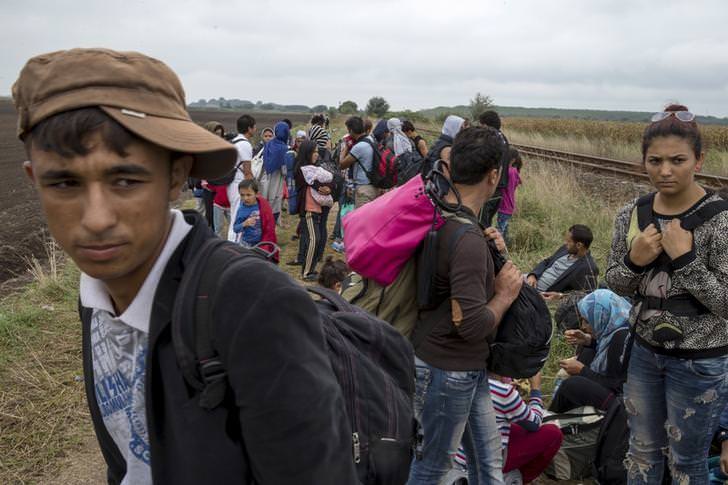 A group of migrants who said they were from Kobani, Syria, rest after crossing into Hungary from the border with Serbia near the village of Roszke September 5, 2015 (Reuters photo)
by Sep 08, 2015 12:00 am
When Iraq invaded Kuwait in 1990, fellow Gulf states raced to shelter thousands of displaced Kuwaitis. Fast forward 25 years, and the homeless from Syria's nearby war have found scant refuge in the Arab world's richest states. For critics of the Gulf's affluent monarchies the contrast is profoundly unflattering, especially as several are backers of the combatants in Syria's conflict, so must, they argue, shoulder a special responsibility for its consequences. The wrenching image of a Syrian Kurdish refugee boy drowned on a Turkish beach has stoked a policy debate in Europe. The official silence of the Gulf Arab dynasties makes many Gulf citizens uneasy. Paintings and cartoons of the young boy's death crowded Arab social media, one depicting little Aylan Kurdi's corpse laid out before an open grave with inert figures in traditional Gulf Arab cloaks and robes holding shovels. Another showed the three-year old's head slumped toward a tombstone marked "the Arab conscience".

Sara Hashash of rights group Amnesty International called the Gulf Arab states' behavior "utterly shameful" and criticized Qatar, Kuwait, Bahrain, Saudi Arabia and the United Arab Emirates for officially taking in zero refugees. Turkey hosts almost 2 million, tiny Lebanon over a million and other restive and poor neighbors hundreds of thousands. The Gulf states' supporters say the numbers involved in Syria's crisis are vastly larger than in the case of the war in Kuwait. They point to the funding Gulf states have given to aid efforts in countries neighboring Syria. "Qatar is very small and already donating to refugees in Jordan, Turkey and northern Iraq. For logistical reasons Qatar cannot take in large numbers of refugees so instead Qatar chooses to support them financially," said Abdullah Al-Athbah, editor in chief of Arab Newspaper. But sympathy for Syria's refugees is on the rise. "It gives us a glimmer of hope after these recent drowning episodes to see broad campaigns of sympathy and solidarity with the issue of Syrian refugees by governments and peoples in some European countries," wrote Zeid al-Zeid in a column for Kuwait's Al-An newspaper on Sunday. "But it makes us sorry and makes us wonder about the absence of any official response by Arab states with the kind of responsibility and ability to which they're bound by kinship and common destiny ... we're seeing a silence that's scandalous."

Sultan Sooud al Qassemi, a commentator in the United Arab Emirates, said he suspected Gulf States were wary of allowing in large numbers of politically vocal Arabs who might somehow influence a traditionally passive society. But he said Gulf states should open their doors to the refugees. "The Gulf states often complain that the Arabic language is underused and that our culture is under threat due to the large number of foreign immigrants," al Qassemi said. "Here is an opportunity to host a group of people who can help alleviate such concerns and are in need of refuge, fleeing a brutal war."

One Kuwaiti analyst, a regular fixture on pan-Arab news shows, raised hackles by saying in a television interview last week that refugees were better suited to poorer countries, failing to acknowledge the pledges of rich European countries like Germany to take in many thousands. "Kuwait and Gulf states are expensive and don't suit refugee life, it suits work. Transportation in Kuwait is expensive too, while living in Lebanon or Turkey is cheaper, so money paid to refugees will go farther," Fahd al-Shelaimi said. "In the end you can't accept other people, from a different environment, from a different place, with psychological problems, nervous system problems or trauma and put them into (our) societies," he added.

Gulf officials and those defending Gulf policies say the outrage overlooks the billions donated to Syrian refugee camps abroad and the delicate demographics of countries where expatriate workers already nearly outnumber locals. "Qatar has provided over $2 billion in aid to the Syrian people in addition to the $106 million provided by Qatar's semi-governmental institutions," a Qatari diplomat said. "Since the conflict began in Syria, Qatar has supported the aspirations and the rights of the Syrian people ... whether through humanitarian assistance, education initiatives or development projects, we have been a strong supporter of Syrian refugees," the source told Reuters.

Others felt Gulf states should go further. "(The Gulf) should accept Syrian refugees. Saudis and Syrians have always been brothers and sisters. Aside from the fact that our religion requires us to do so, helping refugees should be a natural reaction to what we have seen in the media," 22-year old Saudi student Noor Almulla said. While none of the Gulf Arab states have signed onto key global agreements defining refugee status and imposing responsibilities on countries to grant asylum, the United Nations Refugee Agency praised the Gulf's "hospitality." "The six GCC governments continue to respect international standards with regards to protecting refugees," especially in not repatriating them back to their war-torn homes, Nabil Othman, the UNHCR's representative in the Gulf told Reuters. While authorities generally apply "humanitarian considerations" to those overstaying their visas, Othman said work or local sponsorship still mostly defined residency status.

Foreign workers outnumber locals five to one in the UAE and Qatar, where well-heeled European families and South Asian workers are omnipresent while long-robed citizens are rare. Refugee camps are, and will likely remain, non-existent. "The numbers of foreigners are overwhelming. Here we have 90 percent - do you want to turn local people into minorities in their own countries? They already are, but to do it really?" said UAE Abdulkhaleq Abdulla, a political scientist. Over the decades, Saudi Arabia has become home to around half a million Syrians and the UAE to over 150,000, and the welcome extended to these and other expat professionals has helped fuel a boom in Gulf economies.

But since the unrest and wars unleashed by the Arab Spring pro-democracy uprisings in 2011, those governments have adopted a stricter line on accepting Palestinians, Syrians and Shiite Muslims - a sign of just how much the rich and stable Gulf ruled by absolute monarchs is wary of importing political contagions.

Iyad al-Baghdadi, a Palestinian blogger and activist deported from the UAE last year, has criticized the response of the Gulf states and laments the closed borders and repression. Recalling time spent in a Norwegian refugee camp with Syrian refugee friends, he said on Twitter: "Something about this felt absolutely alien - three grown Arab Muslim men who were made homeless and are seeking refuge inScandinavia." "The Arab world is 5 million square miles. When my son was born, among the worst thoughts was how it has no space for him."