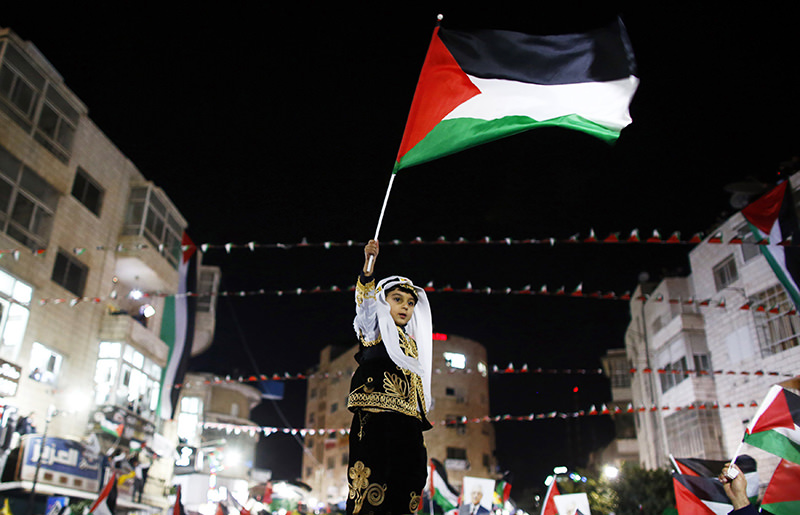 A Palestinian boy in traditional clothes waves a Palestinian flag during a rally in the West Bank city of Ramallah November 29, 2012 (Reuters Photo)
by Sep 10, 2015 12:00 am
The United Nations on Thursday voted to allow the Palestinians to raise their flag at its headquarters in New York, in a symbolic move highlighting Palestinian aspirations for statehood.

The General Assembly was set to vote at 3:00 pm (1900 GMT) on a draft resolution that diplomats said that it was almost certain to garner a majority in the 193-nation forum.

"It is a symbolic thing, but another step to solidify the pillars of the state of Palestine in the international arena," had said Riyad Mansour, the Palestinian representative to the UN.

In Paris, Palestinian prime minister Rami Hamdallah on Thursday called the flag vote "a step on the road towards Palestine becoming a full member of the United Nations."

He spoke after meeting with French Prime Minister Manuel Valls and expressed hope France would one day recognize a Palestinian state -- something it has so far refused to do.

The UN General Assembly resolution would allow the flags of Palestine and the Holy See -- both of which have non-member observer status -- to be hoisted alongside those of the member states.

If adopted, the UN would have 20 days to implement the move, which would be in time for a visit by Palestinian president Mahmud Abbas on September 30.

Mansour said the initiative had the potential to "give our people some hope that the international community is still supporting the independence of the state of Palestine.

"Things are bleak, gloomy, the political process is dead, Gaza is being suffocated. This flag resolution is like the small light of a candle to keep hope alive for the Palestinian people."

Mansour said Palestinians have been lobbying intensively in recent weeks to round up the needed votes.

Diplomats says the only unknown is how broad support for the resolution will be, and in particular the attitude of the Europeans who have been divided over the initiative.

Both Israel and the United States have expressed strong opposition, with Israel's ambassador to the body Ron Prosor slamming "a blatant attempt to hijack the UN."

Prosor this week accused the Palestinians of trying to "score easy and meaningless points at the UN."

He had asked UN Secretary-General Ban Ki-moon and General Assembly president Ron Kutesa to block the move, which would break with the UN practice of flying only the flags of member states
US State Department spokesman Mark Toner called it a "counterproductive" attempt to pursue statehood claims outside of a negotiated settlement.

Abbas and Israeli Prime Minister Benjamin Netanyahu are among world leaders converging on UN headquarters from September 25 for an anti-poverty summit and the annual General Assembly debate.
Pope Francis is to make a much-anticipated address on September 25. The Vatican has officially recognized Palestine as a state.

The Vatican said it would abide by the decision of the General Assembly. But it also noted that the tradition at the United Nations was to fly the flags of full members.

Israeli-Palestinian peace talks have been comatose since a failed US diplomatic effort in April last year, and a war in the Gaza Strip last summer left 2,200 Palestinians dead.