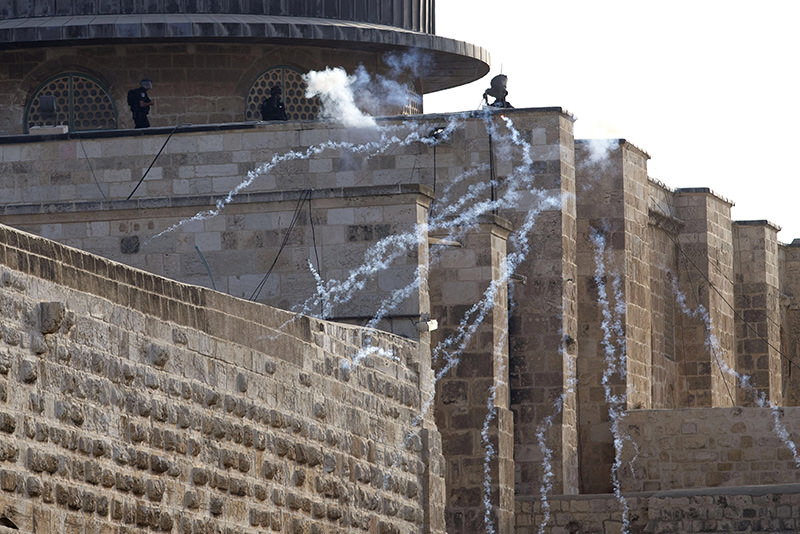 Dozens of Palestinians were injured on Sunday when Israeli security forces stormed occupied East Jerusalem's flashpoint Al-Aqsa Mosque compound and attacked Muslim worshipers, according to witnesses. Witnesses told Anadolu Agency that Israeli forces had used teargas, stun grenades and rubber bullets to disperse Muslim worshipers near the compound's iconic Al-Aqsa and Al-Qibali mosques. "At least 60 Special Forces troops and police stormed the mosque compound at dawn and sealed the Al-Qibali Mosque with iron chains," one eyewitness said. Witnesses at the scene said Israeli security forces had fired teargas and stun grenades inside the mosque itself. Omar al-Qiswani, the mosque's Palestinian director, told Anadolu Agency that he personally had been assaulted-along with several Muslim worshipers-while trying to prevent Israeli troops from entering the mosque. "Israeli forces went up to the roof of the Al-Qibali Mosque, smashing windows and spraying pepper gas inside the building," he said.

Earlier Sunday, scores of extremist Jewish settlers-led by Israeli Agriculture Minister Uri Ariel and backed by dozens of Israeli police and soldiers-also forced their way into the mosque compound. "At least 40 Jewish settlers, accompanied by about 20 Israeli police and Special Forces troops, stormed the compound via the Al-Magharbeh Gate," Sheikh Azzam al-Khatib, director-general of Al-Aqsa affairs, told Anadolu Agency. Israeli forces, he said, had used rubber bullets and teargas to disperse Muslim worshipers who had gathered to protest the settlers' incursion. "Four Palestinians were hurt by rubber bullets while at least 25 others suffered temporary asphyxia due to teargas inhalation," al-Khatib said.

Israeli forces also sealed the gates of the mosque and prevented women and men under 50 from entering it. For Muslims, the Al-Aqsa Mosque complex represents the world's third holiest site. Jews, for their part, refer to the area as the "Temple Mount," claiming it was the site of two Jewish temples in ancient times.

Peace between Israel and Palestine has been and will likely be hard to achieve and will only be made more difficult by Israel's attitude toward the situation surrounding the holy site in East Jerusalem, with clashes continuing between Israelis and Palestinians further triggering social unrest that could threaten peace in the Middle East. Since the Israeli occupation of the West Bank, East Jerusalem and the Gaza Strip in June 1967, the Jordanian government, known as the Waqf, has been running the holy site. The compound is allowed for Muslim prayer alone, however, Jewish Israeli visitors are also allowed into the site under the surveillance of Israeli police. After Israel's former Prime Minister Ariel Sharon's visit to the Temple Mount was seen as provocative and led to the second intifada in September 2000 and sparked the already tense conflict between Israel and Palestinians.
Last Update: Sep 13, 2015 9:02 pm
RELATED TOPICS