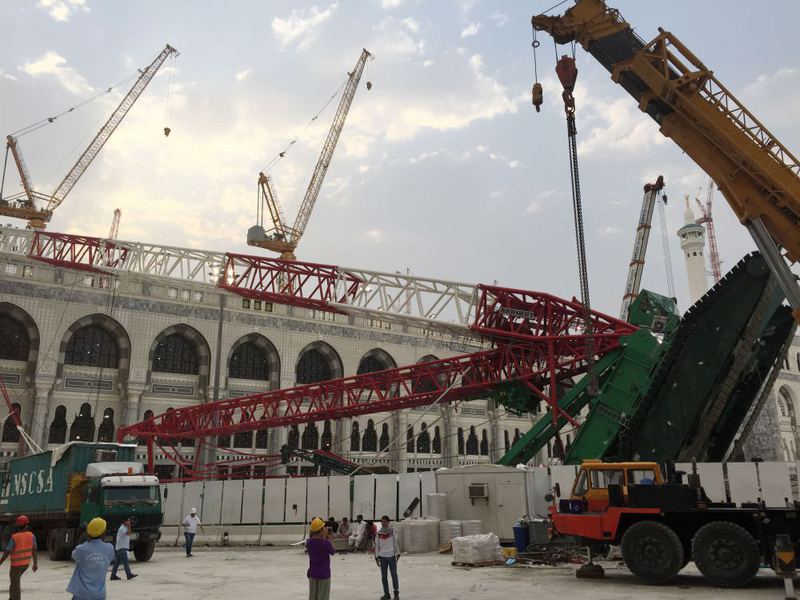 by Daily Sabah with Agencies Sep 14, 2015 12:00 am
Saudi Arabia said on Saturday that stormy winds knocked over the crane that collapsed onto one of Islam's holiest shrines in Mecca, killing 107 people on Friday. "Heavy rain and strong winds of unusually high speed led to the uprooting of trees, the falling panels and the collapse of the crane," General Suleiman al-Amr, director general of the Civil Defense Authority, told Saudi-owned Al Arabiya TV on Saturday. The number of deaths may increase, al-Amr said. Many of the 238 people injured in the accident were only lightly wounded, he said. Mecca's governor, Prince Khaled al-Faisal, has ordered an investigation into the incident, Al Arabiya said. Saudi Arabia's King Salman offered his condolences on Saturday to the families of victims. The state-run Saudi Press Agency (SPA) said King Salman "discussed the causes of the accident and its effects on the holy mosque."

The number of Turkish nationals killed Friday when a crane collapsed on the mosque, which was teeming with Muslim pilgrims, has risen to seven, Turkish officials said Sunday. Mehmet Görmez, the head of the Presidency of Religious Affairs (DİB) offered his condolences to the families of the victims and said, "We hope the construction finishes as soon as possible and this important pillar can be saved from the shadow of the cranes."

The hajj, a pillar of the Muslim religion that last year drew about 2 million faithful, will take place despite Friday's tragedy, Saudi authorities said, as crowds returned to pray a day after the incident. Hundreds of thousands of pilgrims had already arrived in Mecca when the massive red and white crane toppled over during a Friday thunderstorm. Parts of the Grand Mosque remained sealed off on Saturday around the wreckage of the crane, which also injured around 200 people when it crashed into a courtyard. The contractor, engaged in a major expansion of the mosque, has been directed to ensure the safety of all other cranes at the site, SPA said. The cranes soar skywards over the sprawling expansion taking place beneath the Mecca Royal Clock Tower, the world's third tallest building. For years, work has been under way on a 400,000-square-meter enlargement of the Grand Mosque to allow it to accommodate up to 2.2 million people at once.

Irfan al-Alawi, co-founder of the Mecca-based Islamic Heritage Research Foundation, suggested that the authorities had been negligent by having a series of cranes overlooking the mosque. "They do not care about the heritage, and they do not care about health and safety," he told AFP. Alawi is an outspoken critic of redevelopment at Muslim holy sites, which he says are wiping away tangible links to the Prophet Muhammad. But an engineer for the Saudi Binladin Group, the developer, told AFP the crane had been installed in "an extremely professional way" and that there had been no technical problems. "It was an act of God," he said. The Saudi Binladin Group belongs to the family of the late Al-Qaeda leader Osama bin Laden.
RELATED TOPICS