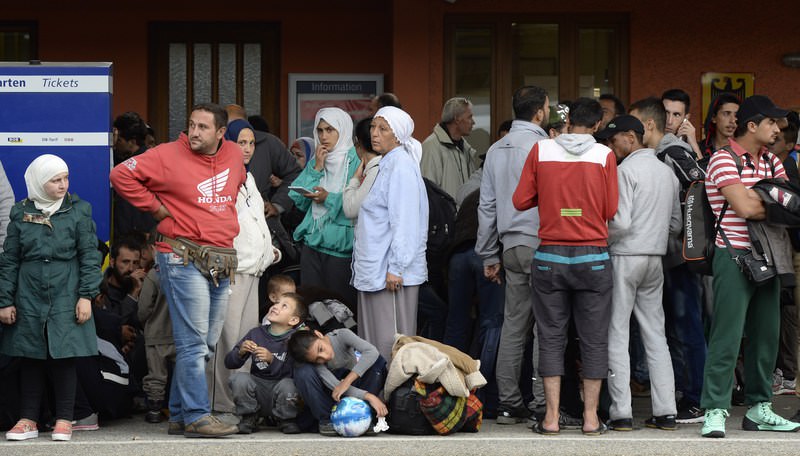 Refugees wait for a special German train after they were taken out from express trains coming from Hungary and Austria at the train station in Freilassing, southern Germany, September 15, 2015. (AFP Photo)
by Anadolu Agency Sep 15, 2015 12:00 am
German Vice Chancellor Sigmar Gabriel said that countries sharing a border with Syria -Turkey in particular- should be helped with their refugee crises to stem the flow of asylum seekers into western Europe, underlining that Germany could not solve the refugee problem on its own.

In remarks made after a meeting with local administrators in Berlin Tuesday, Gabriel said: "We have to talk with Turkey and help them because their capacities are also running out. I know, Turkey struggled a lot in the last years. I myself visited the refugee camps there which have high standards."

He also said that other neighboring countries with Syria also needed help to deal with refugees and emphasized the need for improving refugee camps in Jordan and Lebanon.

The refugee crisis has put Europe's border-free Schengen agreement under pressure as many EU countries, particularly those in central and eastern Europe, remain reluctant to accept tens of thousands of refugees.

Referring to EU interior ministers meeting held in Brussels Monday that failed to reach an agreement over quotas for 120,000 refugees, Gabriel said that Europe had disgraced itself.

New figures show more than 2,800 refugees died crossing the Mediterranean Sea so far this year, including 167 in the waters between Greece and Turkey, the International Organization for Migration (IOM) said on Tuesday.

The figure is slightly lower than the same period last year, when 2,993 perished.

The largest national group was from Syria, where refugees have fled the four-year civil war, with 175,375 Syrians reaching Greece and 6,710 arriving in Italy.

"Over this past weekend and through the first days of this week, an estimated 72 migrants have lost their lives in their attempt to cross into the Greek islands from Turkey," the IOM said in a statement.