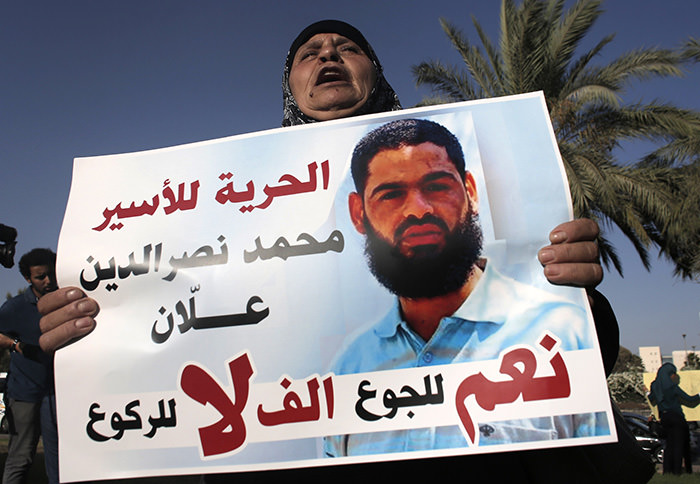 Maazouze, the mother of Mohammed Allaan holds a portrait of her son during a rally calling for his release in the southern Israeli city of Beersheva on August 9, 2015 (AFP Photo)
by Anadolu Agency Sep 16, 2015 12:00 am
Israeli authorities on Wednesday re-arrests a Palestinian man after an Israeli hospital discharged following a two-month hunger strike to protest his initial detention without charges.

Barzilai hospital said Mohammed Allan's condition had improved enough for him to be discharged. Allan's lawyer Jamil Khatib said that shortly after Allan's release he was detained again by Israeli authorities and immediately resumed his hunger strike. Khatib said the renewed detention was illegal since it did not include a review of the case and that he would appeal to Israel's Supreme Court on Allan's behalf.

Allan ended a 66-day hunger strike last month after Israel's Supreme Court suspended his detention. The prolonged strike put him in serious condition and doctors feared that he had suffered some brain damage as a result of the fast.

Allan's case tested a new Israeli law allowing fasting inmates to be force-fed, a measure that many doctors say amounts to torture. It also cast light on Israel's use of administrative detention the holding of suspects in special cases for long periods without charge.

During his prolonged hunger strike, Allan was not force-fed, which entails inserting a feeding tube into his stomach. He was, however, given intravenous fluids, vitamins and nutrients as his condition deteriorated.

The Supreme Court suspended the detention order and released Allan while he received medical care. It did not specify what would happen to Allan if he recovered, saying only that he could petition for his release if his condition improved. Khatib said that authorities were required to review Allan's case before detaining him again.

The Arab civil rights group Adalah, which petitioned the court on Allan's behalf, said the new arrest was a "random and vindictive act" that had nothing to do with the evidence required to keep him in administrative detention.

Khatib began his fast to protest the policy of administrative detention. Israeli authorities argue the measure is needed to stop militant attacks, adding that revealing the charges would expose intelligence networks and put lives in danger. Rights groups say it violates due process, is meant only for extraordinary cases, and is overused.