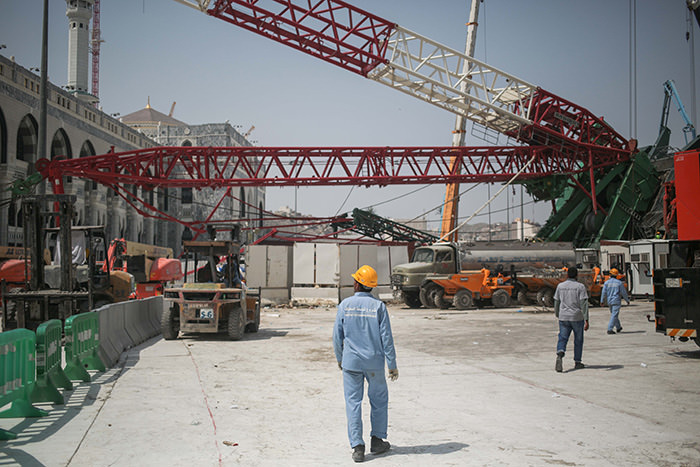 A construction worker walks past the site of a crane collapse that killed over a hundred on Friday inside the Grand Mosque in the holy city of Mecca, Saudi Arabia, Tuesday, Sept. 15, 2015 (
by Compiled from Wire Services
Sep 16, 2015 12:00 am

The Saudi Binladin Group, run by Osama bin Laden's brother, has been banned from taking on new work at the behest of King Salman, following the Mecca crane collapse last week which killed 107 people

Saudi Arabia suspended construction giant Saudi Binladin Group from new contracts following Friday's collapse of a crane in Mecca's Grand Mosque which killed 107 people, as they blamed the group for the accident. It also ordered the Finance Ministry to review existing projects by the firm, a titan of the Arab business world.

King Salman also ordered that the group's board members and senior executives be barred from travel abroad after an investigation into last week's incident showed the crane was not erected in accordance with the manufacturer's instructions.
The disaster was embarrassing for the Saudi ruling family, which defines itself as guardian of Islam's holiest places and has embarked on a series of enormous construction projects in Mecca aimed at expanding its pilgrimage sites.

Saudi Binladin Group has long been regarded in the conservative Islamic kingdom as the government's favorite contractor for important or sensitive work, including defense and security projects.

Explaining the action, an official statement referred without elaborating to the responsibility and "shortcomings" of the company following an investigation into the crane crash that also injured 238 other people.

The suspension, announced in a statement from the royal court, would remain in force until the investigation is complete and until all legal cases are settled, it said.

The company, one of the largest contracting companies in the kingdom, had been carrying expansion work at the Grand Mosque. It was founded more than 80 years ago by the father of al Qaeda leader Osama bin Laden, and is run by Osama's brother Bakr.

Neither the company, nor the family, issued an immediate statement on the suspension. The company is believed to have attributed the collapse to a lightning strike breaking a cable that was used to secure the crane.

A statement by a spokesman for the administration of the mosques in Mecca and Medina said the crane smashed into the part of the Grand Mosque where worshippers circle the Kaaba - the black-clad cube towards which the world's 1.6 billion Muslims face to pray.

"The state ‎wants to show to both the corporate and the Islamic world that they will address any wrongdoing and that they are on top of things," said John Sfakianakis, regional director at Ashmore Group.

The hajj, one of the largest religious gatherings in the world, has been prone to disasters in the past, mainly from stampedes as pilgrims rush to complete rituals and return home. Hundreds of pilgrims died in such a crush in 2006.

However, extensive development work on the main pilgrimage sites, expanding those where dense crowds had previously led to stampedes, have prevented such incidents, which were previously common, in recent years.

Meanwhile, Saudi Arabia's King Salman has ordered 1 million Saudi Riyals (Dh0.98m) compensation for injured with permanent disability, and half a million riyal compensation for those injured in Haram accident, English daily Saudi Gazette reported. Families of the crane collapse victims will also receive one million riyals compensation, the Saudi royal court said. Two relatives of the deceased will be the King's guests for Haj in 2016.