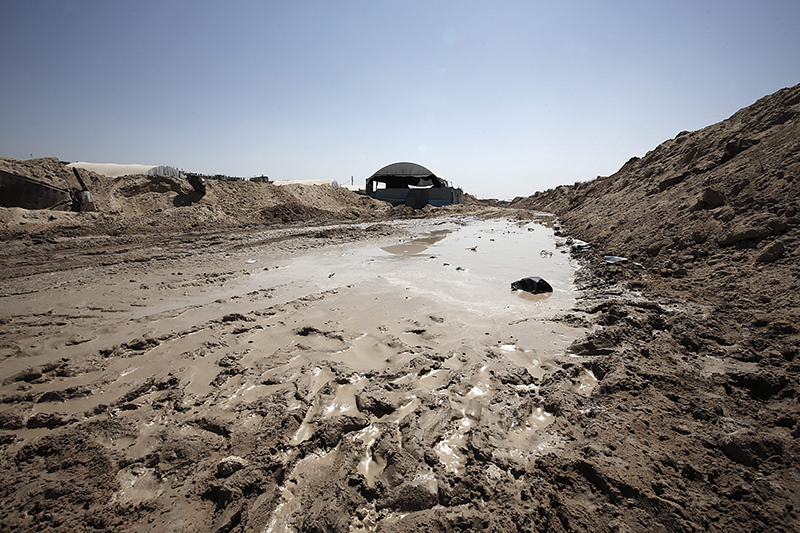 A puddle of water is seen next a tent above the entrance to a tunnel after Egyptian forces flooded smuggling tunnels beneath the border to the Gaza strip, in Rafah (EPA Photo)
by Anadolu Agency Sep 20, 2015 12:00 am
Palestinian group Hamas said on Sunday it was holding talks with Egypt in an effort to stop the Egyptian army from flooding the border area between the Gaza Strip and the Sinai Peninsula.

Last week, the Egyptian army began flooding the area with seawater in an effort to destroy a network of underground tunnels between the Palestinian territory and the restive Sinai Peninsula.

"We are holding official contacts with Cairo to halt this move," Hamas spokesman Sami Abu Zuhri said in a statement.

He said that the Egyptian move poses a major threat to the underground water and houses on the Palestinian side.

"We hope that [Egypt] would accept our request to halt these rejected measures," Abu Zuhri added.

Anadolu Agency could not get a comment from the Egyptian authorities on the report.

Blockaded by Israel since 2007, Gaza used to receive much-needed supplies through the network of smuggling tunnels on its border with Egypt's Sinai Peninsula.

Since the 2013 military coup against President Mohamed Morsi, Egyptian authorities have cracked down on the smuggling tunnels along the border with Gaza.

Egypt says the tunnels are used in militant activities inside Sinai.

Last year, Egyptian authorities began to establish a buffer zone in North Sinai's city of Rafah along the border with Gaza following a spate of militant attacks against army and security forces.