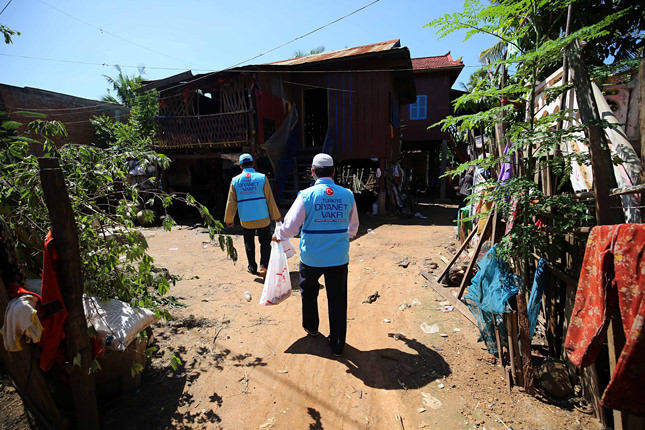 by Anadolu Agency Sep 24, 2015 12:00 am
Cambodia is among 103 countries and more than 500 regions which will receive such donations this Eid from Turkey's Directorate of Religious Affairs.

Members of Cambodia's Cham Muslim community have greeted visiting dignitaries as they flocked to mosques countrywide to welcome the first day of Eid al-Adha.

Among those attending services Thursday was Erdal Atalay -- the head of foreign relations at Turkey's Directorate of Religious Affairs -- who visited the province of Kampong Thom in the centre of Cambodia to donate cows for the religious festival.

The directorate said in a press release Thursday that Cambodia is among the 103 countries and more than 500 regions which will receive such donations this Eid.

"Two separate teams will sacrifice 220 cows in six regions of Cambodia and then distribute the meat to roughly 20,000 families," said Atalay.

Cambodia -- a majority Buddhist country -- has a population of 15 million, of which around 600,000 -- the country's largest religious minority -- are Muslim.

A majority of the country's Muslims live in Kampong Cham and the capital city Phnom Penh.

There are around 650 mosques in Cambodia, the largest of which was inaugurated by Prime Minister Hun Sen in March 2015.

Many of the Cham suffered greatly at the hands of the Khmer Rouge—the ultra-Maoist rebels who seized power in Cambodia in 1975 and whose four-year rule saw 1.7 million Cambodians murdered or die from starvation.

Under the Communist regime, all religion was banned, and places of worship and religious documents destroyed.

The Cham were particularly targeted and at least a third of their population was killed during Khmer Rouge rule, according to international human rights organization Minority Rights Group International.