Not the first stampede in Mina, this is the history of tragedies at Hajj pilgrimage 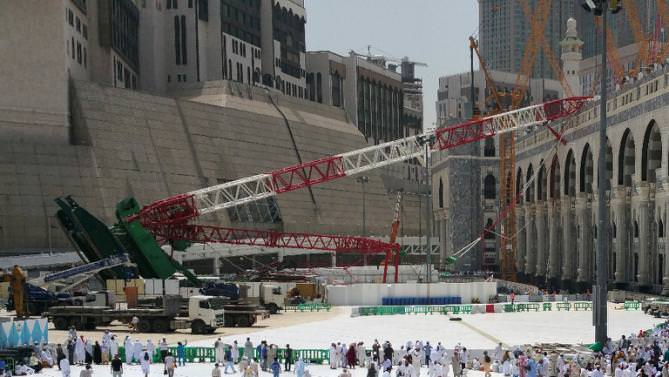 by French Press Agency - AFP Sep 24, 2015 12:00 am
The deadly stampede at the Hajj in Saudi Arabia on Thursday is just the latest tragedy to strike the pilgrimage.

Here is a timeline of significant incidents during the annual event, which draws around two million Muslim faithful from around the world.

September 24: A stampede during the "stoning of the devil" ritual in Mina, near Mecca, leaves at least 310 people dead and hundreds injured.

September 11: 109 people are killed and hundreds injured, including many foreigners, when a crane collapses on Mecca's Grand Mosque after strong winds and heavy rain.

January 6: 76 people die when a hotel collapses in the city center.

January 12: 364 pilgrims are killed in a stampede during the stoning ritual in Mina.

January 22: Three pilgrims are crushed to death in a stampede at the stoning ceremony in Mina.

February 1: 251 people are killed in a stampede at Mina.

February 11: 14 faithful, including six women, die on the first day of the stoning ritual.

April 15: A fire caused by a gas stove rips through a camp housing pilgrims at Mina, killing 343 and injuring around 1,500.

May 7: Three people die and 99 are injured when a fire breaks out at the Mina camp.

May 24: 270 people are killed in a stampede during the stoning, an incident authorities attribute to "record numbers" of pilgrims at the site.

July 2: A huge stampede in a tunnel at Mina after a failure in its ventilation system kills 1,426 pilgrims, mainly from Asia.

July 10: A twin attack on the outside of the Grand Mosque kills one and wounds 16. Sixteen Kuwaiti Shiites are found guilty of the crime and executed weeks later.

July 31: Saudi security forces suppress an unauthorised protest held by Iranian pilgrims. More than 400 people, including 275 Iranians are killed, according to an official toll.

November 20: Hundreds of gunmen opposed to the Saudi government barricade themselves inside the Grand Mosque, taking dozens of pilgrims hostage. The official toll of the assault and subsequent fighting is 153 people dead and 560 wounded.