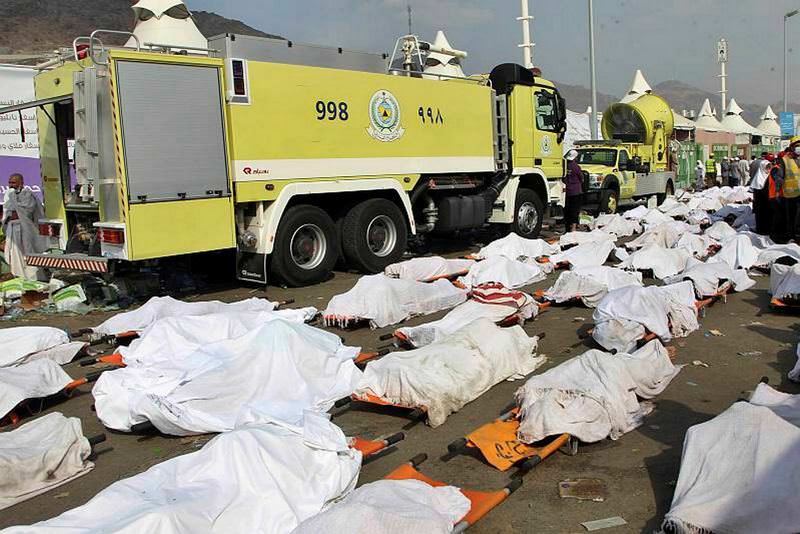 Bodies of some of the pilgrims killed in a stampede are lined up in the Mina neighborhood of Mecca, Saudi Arabia.
by Daily Sabah with Wires Sep 28, 2015 12:00 am

Amid the proxy war between Tehran and Riyadh taking place in Yemen, Iraq and Syria, the stampede that left hundreds of dead increased tensions between the two countries as most of the dead hajis Iranians

The tension between Iran and Saudi Arabia that has become a proxy war in Yemen, Iraq and Syria has been escalated after the Hajj disaster that left hundreds of pilgrims dead. Iran on Saturday vowed to take international legal action against Saudi Arabia's rulers over the crush of Muslim pilgrims during this year's hajj, which killed at least 769 people, including 136 Iranians.

Saudi Arabian Foreign Minister Adel Al-Jubeir later responded to Iran's criticism, telling reporters in New York: "I believe that the Iranians should know better than to play politics with a tragedy that has befallen people who were performing their most sacred religious duty, which is the pilgrimage."

The pilgrims suffocated or were trampled to death Thursday when two massive crowds converged on a narrow street, in the worst disaster to occur during the annual pilgrimage in a quarter-century. Shiite Iran has accused Sunni Saudi Arabia of mismanaging the pilgrimage, which annually draws some 2 million people from 180 countries.

Iranians comprise the largest group of casualties identified so far. Iranian state TV says a former ambassador to Lebanon, as well as two Iranian state TV reporters and a prominent political analyst are among those still missing. The semi-official Fars news agency said a former ambassador to Slovenia was among the dead. "Under international law, this incident is absolutely subject to prosecution. The Al-Saud must be responsive," Iran's State Prosecutor Ebrahim Raisi told state TV, referring to Saudi Arabia's ruling family. He said Saudi authorities blocked a road used by hajj pilgrims to allow a royal convoy to pass through, causing the deadly convergence in the town of Mina on the outskirts of Mecca. "They have to know that we will pursue the trial of Al-Saud for the crime they have committed against the hajj pilgrims through international courts and organizations."

Neither Iran nor Saudi Arabia is a state party to the International Criminal Court, and only the court's prosecutor can file charges. Iran could try to file a case at the International Court of Justice, which handles disputes between nations but does not mete out criminal justice. Saudi Arabia has not responded to the Iranian accusations regarding the convoy. Saudi Interior Ministry spokesman Maj. Gen. Mansour al-Turki told The Associated Press that a VIP convoy traveling through Mina on Thursday, which included foreign dignitaries, had nothing to do with the incident and was in a different part of town. He said VIPs use their own roads in Mina.

Iran's President Hassan Rouhani began an address to the U.N. General Assembly on Saturday by expressing "regret over the heart-rending incident," emphasizing the "need for swift attention" to an investigation into "this incident and other similar incidents in this year's hajj." The Saudi foreign minister, speaking to reporters on the sidelines of his meeting with U.S. Secretary of State John Kerry, said that "we will reveal the facts when they emerge. And we will not hold anything back. If mistakes were made, who made them will be held accountable. And we will make sure that we will learn from this, and we will make sure that it doesn't happen again."

The Saudi Health Ministry said Saturday on Twitter that the toll from the hajj disaster stood at 769 pilgrims killed and 934 injured, updating previous figures. It did not provide the nationalities of the dead and injured. Iranian state TV said 136 Iranian pilgrims were among the dead and 85 were injured, while 344 Iranians remain missing.

The Middle East, which has been an area of sectarian conflict since the early years of Islam - yet remained relatively calm under the rule of the Ottoman Empire - has been dragged into a new sectarian wave as anachronistic disputes have been triggered by regional powers with the intention of expanding their influence. Iran and Saudi Arabia, which has a centralized Shia version of Islam and the strict religious jurisprudence of Salafi-Wahhabist thought for its policies, respectively, have entered into a competition over the region through applying sectarian policies from which the people of the region suffer. Being far from the mainstream Islamic understanding that is in effect from Indonesia to Senegal, the two countries have been following expansionist policies. Iran has adopted the policy of leading and uniting the Shiite communities in different Arab countries, including Iraq and Yemen, following the revolution in 1979, whereas Saudi Arabia aims to expand Wahhabi Islam through aiding Wahhabi communities in several countries, as the strict version of Islam rejects the accuracy of any other Islamic interpretation.
RELATED TOPICS