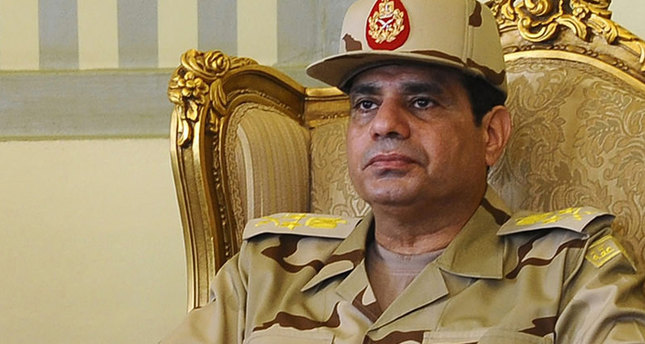 by Daily Sabah with AA Sep 29, 2015 12:00 am
An Egyptian court on Monday sentenced three supporters of ousted President Mohamed Morsi to death for committing "acts of violence", according to a local judicial source.

The court also slapped 25 Morsi supporters with life sentences (maximum 25 years) for their alleged involvement in violence that occurred in the coastal city of Alexandria in mid-2013, the source said.

According to the source, 21 other defendants received 15 years in prison each, while another 22 received ten-year jail terms.

Prosecutors had accused the defendants of killing three policemen and 13 civilians and possessing weapons illegally-claims vehemently denied by the defendants.

U.N. chief met with Sissi, who came to power after toppling down former President Mohamed Morsi- Egypt's first democratically elected president - on the sidelines of the U.N. General Assembly in New York, as more than 140 world leaders flocked to the city to attend the annual "general debate".

"[Ban] called on President Sisi to exercise leadership in protecting human rights and human dignity in Egypt and in the region," it added.

Egypt has been roiled by violence and turmoil since the military coup led by the current President Abdel Fattah al-Sissi. The former President Mohamed Morsi, the country's first freely elected civilian president has been imprisoned since mid-2013 after he had served only one year in office.

In the more than two years since, security forces have killed hundreds and detained tens of thousands of Brotherhood members and Morsi supporters.

Since Morsi's ouster, Egyptian courts have sentenced more than 1,700 people-including Morsi himself-to death, although only seven of these have been carried out to date.

The remaining death sentences face appeal by the defendants, have been overturned by the courts, or are still awaiting the approval of Egypt's grand mufti, the country's top religious authority.
Last Update: Sep 29, 2015 4:53 pm
RELATED TOPICS