by daily sabah Sep 29, 2015 12:00 am
Following the stampede that took the lives of hundreds of pilgrims during the Hajj pilgrimage in Mina near Mecca, Iran and Saudi Arabia took their regional rivalry to another level as unconfirmed reports of the final death toll and fate of the dead pilgrims float around multiple outlets.

The article claimed that the statement acknowledged the cause of the disaster as "extreme heat and suffocation of pilgrims because of pushing each other."

The article also contained a screenshot from the web address http://press.moh.gov.sa/ 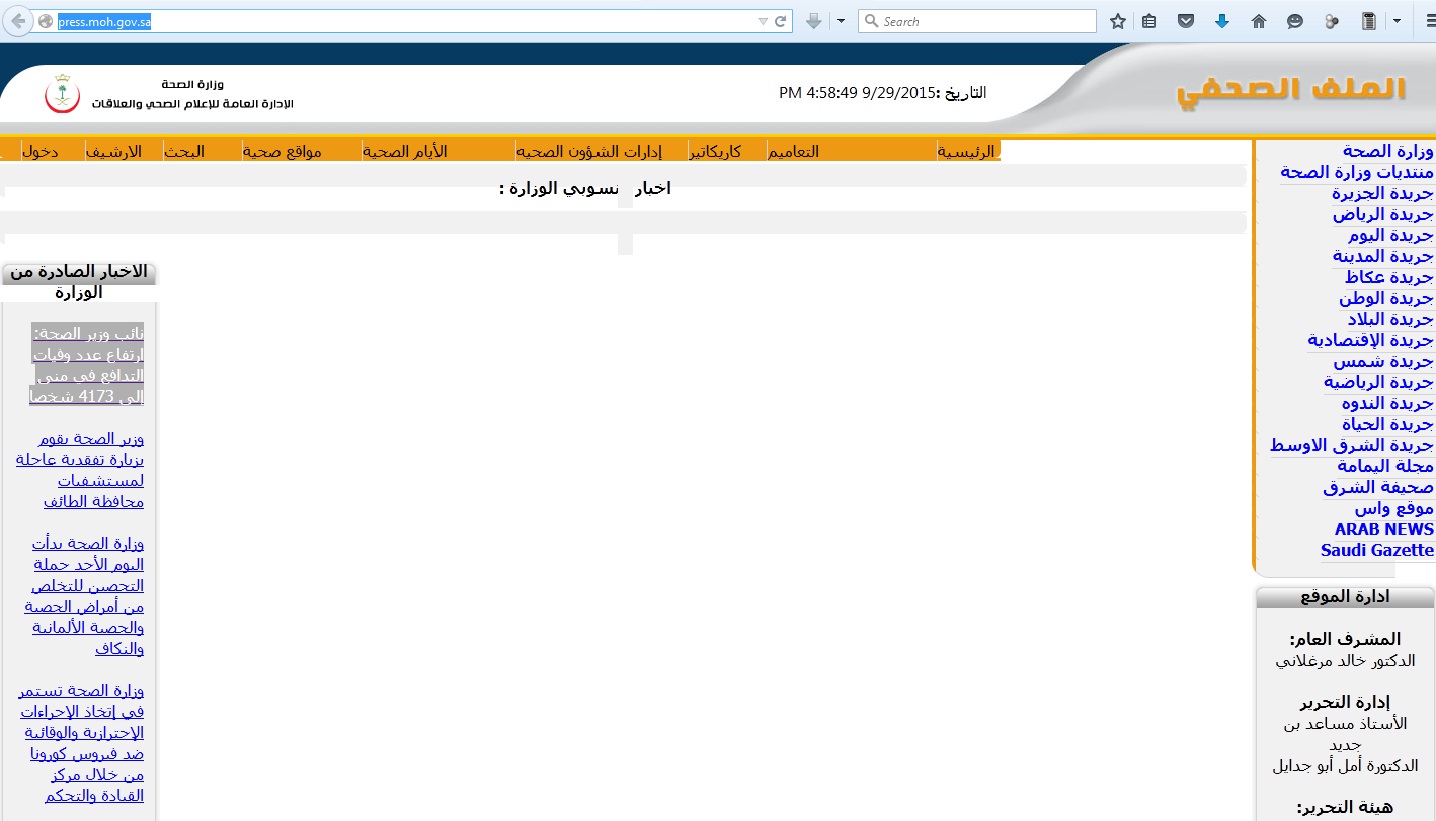 However, the alleged article in the website was out of reach for hours, despite numerous attempts.

Meanwhile, this is how the original Saudi Health Ministry website looks like, far from the one the article was based on:

Al-Alam news website so far has remained as the only source of this claim, and no major agency has covered its allegations, despite the increased public interest throughout the world.

On Monday, another claim by an Iranian authority increased the worries of Muslims and people all around the world regarding the scale of the tragedy. Said Evhedi, the President of Iran's Hajj Council on Monday claimed that a total of at least 4,700 pilgrims died in the recent hajj stampede tragedy, challenging official figures released by Saudi Arabia, which put the death toll at 769.

Evhedi reportedly spoke at Iranian TV channel IRINN and stated that the death toll is much higher than Saudi figures.

"We believe that at least 4,700 people died in the hajj stampede and there are at least 3,000 corpses awaiting identification in 21 trucks" Evhedi said, while noting that the number of Iranians who died in the incident has risen to 228.

Amid the proxy war between Tehran and Riyadh taking place in Yemen, Iraq and Syria, the stampede that left hundreds of dead increased tensions between the two countries as Iranians constitute an important part of dead hajis.

Iran on Saturday vowed to take international legal action against Saudi Arabia's rulers over the crush of Muslim pilgrims during this year's hajj.

"Under international law, this incident is absolutely subject to prosecution. The Al-Saud must be responsive," Iran's State Prosecutor Ebrahim Raisi told state TV, referring to Saudi Arabia's ruling family. He said Saudi authorities blocked a road used by hajj pilgrims to allow a royal convoy to pass through, causing the deadly convergence in the town of Mina on the outskirts of Mecca. "They have to know that we will pursue the trial of Al-Saud for the crime they have committed against the hajj pilgrims through international courts and organizations."

Neither Iran nor Saudi Arabia is a state party to the International Criminal Court, and only the court's prosecutor can file charges. Iran could try to file a case at the International Court of Justice, which handles disputes between nations but does not mete out criminal justice.

Pakistan and India have also voiced concerns about the death toll, with possible death figures reaching up to 1,100.