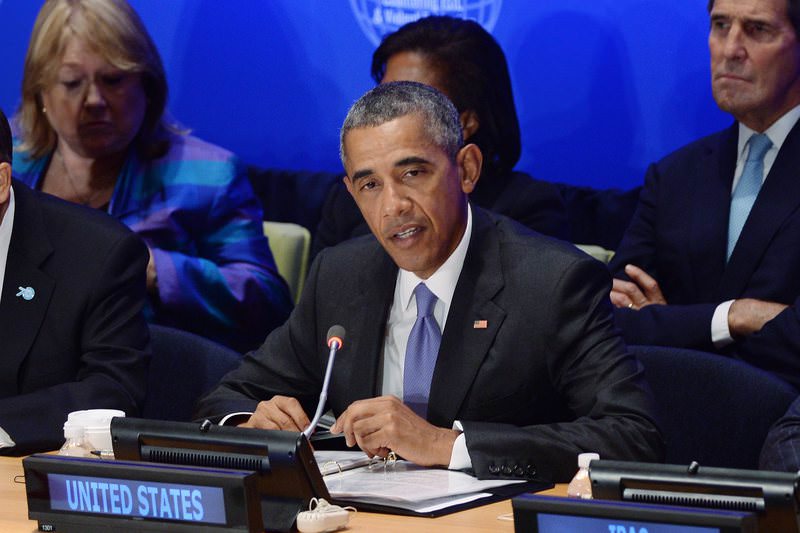 by Daily Sabah with AA Sep 30, 2015 12:00 am
President Barack Obama on Tuesday announced new partners in the anti-ISIS coalition.

"The United States established and is leading a coalition of more than 60 partners committed to degrading and ultimately destroying ISIS, and today welcomed new coalition members Malaysia, Nigeria, and Tunisia to join those efforts," Obama said.

Obama's announcement came during a counter terrorism summit on the sidelines of the UN General Assembly meetings in New York.

The American leader acknowledged that the campaign to counter militants would experience certain setbacks but was sanguine about end results.

"Ultimately I am optimistic, in Iraq and in Syria ISIS is surrounded by communities, countries and a broad international coalition committed to its destruction," he said. "We see that ISIS can be defeated on the battle field where there is sound organization and a government and military coordinating with this coalition, and our diplomatic efforts."

In Iraq, he said Mosul, Ramadi and Fallujah are still under ISIS control but one-third of populated areas have been retaken from the militants.

But in Syria, Obama's hopes versus the realities on the ground have not exactly been in sync as the coalition allegedly suspended a train-and-equip program for Syrian opposition groups after the Pentagon confirmed trained fighters handed over some of their equipment to al-Nusra Front, a radical group fighting in Syria.

At the Pentagon, spokesman Peter Cook denied that the beleaguered program has been canceled, but reiterated that it is under review and "there are changes being considered."

He said training is ongoing, but did not confirm any formal changes to the program.

The coalition has trained only about 120 fighters, nearly half of whom are currently unaccounted for.

Separately, the U.S. issued a total of 35 terrorist designations on Tuesday, blacklisting ISIS' Caucasus and Sinai affiliates, an Indonesia-based ISIS-linked group, and a group called the "Islamic State of Iraq and the Levant Khorasan", which the State Department said is led by former Tehrik-e-Taliban commander Hafiz Saeed Khan.

Jund al-Khilafah in Algeria, which abducted and beheaded French national Herve Gourdel, and is linked to ISIS, was also designated.

French and British nationals were among the 35 individuals and groups blacklisted by the State and Treasury departments. All of their property within the U.S. has been frozen, and U.S. nationals are prohibited from conducting business with them or on their behalf.

Meanwhile, Russia has deployed heavy weapons and troops inside Syria to support the Assad regime and to conduct its independent campaign against ISIS.

Obama and Russian President Vladimir Putin have voiced opposing views about a political transition in Syria.

Washington wants Assad to relinquish power but Moscow strongly stands behind the Syrian dictator and urges international support for Assad.

Obama reiterated his position Tuesday with respect to Assad's future, calling for his removal.

He also said that Muslims are exposed to ISIS's extremism.

"Violent extremism is not unique to any one faith, so no one should ever be profiled or targeted simply because of their faith," he warned.

The U.S.-led coalition has been fighting ISIS militants for more than a year at a cost of nearly $3 billion, following the militants' upsurge in Iraq early last June when ISIS began capturing large swaths of territories in Syria and Iraq.

Despite the enormous costs and resources invested in the fight, the outcome still hangs in the balance.
Last Update: Sep 30, 2015 1:02 am
RELATED TOPICS