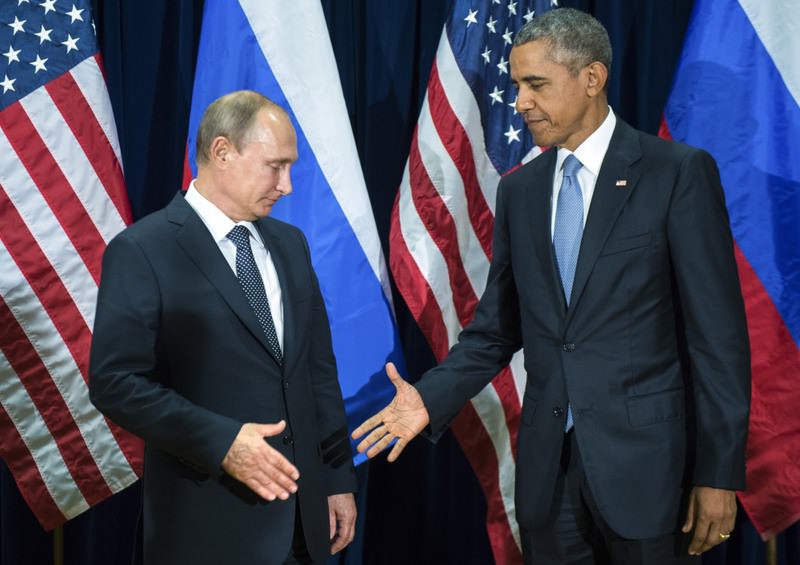 Russia's President Vladimir Putin and U.S. President Barack Obama pose for members of the media before a bilateral meeting on Monday.
by Daily Sabah with Agencies Sep 30, 2015 12:00 am

World leaders gathered at the opening day of the U.N. General Assembly with a focus on the historic flood of refugees, rise of extremist groups and the conflict in Syria. Obama called Assad a ‘tyrant'. Putin sharply disagreed over Assad's position in any political transition in Syria, but both he and Obama said they are ready to work with each other

World leaders glided through the opening day of a U.N. gathering Monday that aims to wrestle with the globe's biggest crises of a historic flood of refugees, the rise of threats like the Islamic State of Iraq and al-Sham (ISIS) and the conflict in Syria.

U.N. Secretary-General Ban Ki-moon for the first time called for the civil war in Syria to be referred to the International Criminal Court, while Iranian President Hassan Rouhani said Iran's recent nuclear deal with world powers had a broader goal: "We want to suggest a new and constructive way to recreate the international order."

In his state of the world address to leaders from the U.N.'s 193 member states, Ban called for a political solution to the conflict in Syria, now well into its fifth year, with more than a quarter of a million people killed. Ban said the five countries, Russia, United States, Saudi Arabia, Turkey and Iran, "hold the key" to a political solution to Syria.

U.S. President Barack Obama and Russian President Vladimir Putin's first formal meeting in more than two years started with an awkward handshake and ended without a breakthrough on Syria, a crisis that has strained their already tense relationship. Obama and Putin, hours ahead of their first face-to-face meeting in nearly a year, gave no sign of closing their deep divide on the Syrian crisis. On the biggest issue that divides them in Syria, the status of embattled Syrian President Bashar Assad, Obama and Putin left their discussions Monday exactly where they started. Obama said of Assad: "When a dictator slaughters tens of thousands of his own people, that is not a matter of a nation's internal affairs." The U.S. is prepared to work with any country, including Russia and Iran, to resolve Syria's conflict, Obama said.

The U.S. president also took jabs at Russia and China, without naming names. "The strong men of today become the spark of revolution tomorrow," Obama warned. And he added in a critique of restrictions on speech: "You can control access to information ... but you cannot turn a lie into truth."

Putin, who showed up at the U.N. gathering for the first time in a decade and was not at Russia's seat in the chamber when Obama spoke, called for the creation of a broad international coalition against terror following his country's surprising moves in recent weeks to increase its military presence in Syria and to share intelligence on ISIS with Iran, Iraq and Syria.

Despite the division between Obama and Putin, both leaders appeared interested in whether their meeting on the sidelines of the U.N.s General Assembly could yield progress toward ending Syria's four-and-a-half-year civil war. Putin and Obama later met for an hour and a half for talks the Russian leader dubbed "frank and constructive", and a senior U.S. official called, "business-like back and forth." Both leaders agreed there should be a process of political transition in Syria, but the U.S. official added they "fundamentally disagreed" on Assad's role. "Strange as it may seem, there were many common points," Putin told reporters. "There were also disagreements which we agreed to work together. I hope this work will be constructive."

Obama said Washington was ready to work with Russia and even Iran against ISIS militants, but warned this must not mean keeping Assad in power in Damascus indefinitely. "The United States is prepared to work with any nation, including Russia and Iran, to resolve the conflict," he said, calling Assad a "tyrant." Rather than a bulwark against extremism, Obama argued that Assad drives Syrians into the arms of such groups by such acts as dropping "barrel bombs to massacre innocent children."

Not to be outdone, Putin blamed the rise of violent extremism on the U.S. military interventions in Iraq and Libya, which he said unleashed chaos in the Middle East. He dismissed the West's concerns about his country's ambitions in Syria and called it "an enormous mistake to refuse to cooperate" with the Syrian government. Putin also moved swiftly to try to capitalize on the failure of U.S. efforts to train and equip moderate Syrian rebels, which is a $500 million Pentagon program that was supposed to yield more than 5,000 fighters, but instead has only led to a handful of active graduates. Putin jabbed Obama over the program's failures in his remarks to the U.N. General Assembly on Monday. Ukraine's table just in front of the speaker's stand was empty as Putin spoke. The country struggles against pro-Russia separatists in its east while Russia denies supporting them.

Rouhani appeared to align with Putin's call for a U.N. Security Council resolution consolidating the fight against terror, saying: "We propose that the fight against terrorism be incorporated into a binding international document and no country be allowed to use terrorism for the purpose of intervention in the affairs of other countries." Saudi Arabian Foreign Minister Adel al-Jubeir lashed out at Iran, saying: "Iran is the last to talk" on establishing and maintaining stability in Syria, Al-Arabiya reported. Tehran has been claimed to provide financial and military support to the Syrian regime.

Some European powers are reportedly softening their stance, signaling that Assad could stay on in an interim role, but French President François Hollande stuck close to Obama's line. "Russia and Iran say they want to be part of a solution," he said. "So we must work with these countries to explain to them that the route to a solution does not go through Bashar al-Assad."

Meanwhile, Obama announced that more than 40,000 new troops and police have been pledged to U.N. peacekeeping missions from more than 50 countries. He spoke at a high-level meeting chaired by the U.S. to strengthen and modernize peacekeeping, which increasingly faces threats from extremist groups while being severely stretched in personnel and equipment.

Other issues at the center of this week's discussions include the refugee and migrant crisis, the largest since the upheaval during World War II. Ban warned that resources to address them are dangerously low. "The global humanitarian system is not broken; it is broke," he said. The U.N. has just half of what it needs to help people in Iraq, South Sudan and Yemen, and just a third of what is needed for Syria. The U.N. chief, in unusually hard-hitting words, also blamed "proxy battles of others" for driving the fighting in Yemen, and he warned against "the dangerous drift" in resolving the Israeli-Palestinian conflict, saying it is essential for the international community to pressure both sides to re-engage.

Others speaking Monday included Hollande, who again declared that Assad "cannot be part of the solution" to the Syrian conflict, and Cuban President Raul Castro, who also has a meeting planned with Obama. Some, including Obama, Xi and Hollande, already addressed the General Assembly over the weekend during a separate global summit on sweeping new U.N. development goals for the next 15 years.

More than 240,000 people have died and 4 million have been forced to leave their homes since the Syrian civil war started in 2011 after peaceful pro-democracy protests were violently suppressed by the regime.
RELATED TOPICS