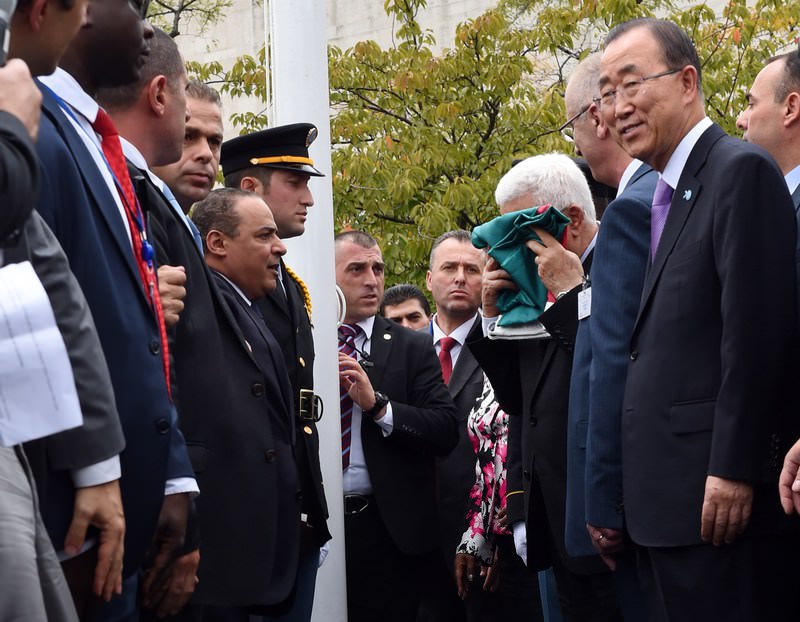 Despite objections from Israel and the U.S., the Palestinian flag was raised at U.N. headquarters in New York for the first time, which Palestinian President Abbas called a ‘historical moment.’ Abbas emphasized that Palestine deserves full recognition and full membership

The Palestinian flag was raised at the United Nations in a symbolic gesture Wednesday as leader Mahmud Abbas called on the world body to grant them full membership, warning the risk of religious conflict.

U.N. Secretary General Ban Ki-moon and Abbas presided over the packed, slightly chaotic ceremony against a backdrop of stalemate in the peace process and escalating tensions at holy sites in Jerusalem. "In this historical moment, I say to my people everywhere: raise the flag of Palestinians very high because it is the symbol of our identity," the 80-year-old Abbas told the crowd. "It is a proud day." Israel and the United States, which voted against the flag-raising, have called it a symbolic move that will not serve the cause of peace.

On Wednesday, the Diplomatic Quartet agreed at talks in New York to revitalize the quest for a political settlement, warning that facts on the ground were "dangerously imperiling" a possible two-state solution. "Now is the time to restore confidence by both Israelis and Palestinians for a peaceful settlement and, at last, the realization of two states for two peoples," Ban told the ceremony.

The crowd, which included French Foreign Minister Laurent Fabius, diplomats from around the world and journalists, cheered when the red, black, white and green Palestinian flag fluttered in the gentle breeze.

Palestinians in the West Bank celebrated President Mahmud Abbas's United Nations General Assembly speech on Wednesday and the raising of their flag at U.N. headquarters for the first time. In Ramallah, the seat of the Palestinian Authority in the occupied West Bank, hundreds of people gathered to watch his speech in front of a huge screen at Arafat Square. They cheered loudly and waved flags as he spoke. The crowd in Ramallah cheered and clapped, breaking out in chants of "With our souls and blood we sacrifice for you, Palestine."

The ceremony was also attended by Prime Minister Ahmet Davutoğlu. During his address to the General Assembly, Davutoğlu said that hoisting the Palestinian flag is a "significant step toward enabling the parties to stand at an equal footing at the table, for a healthy negotiation process that leads to an equitable and sustainable peace." Meanwhile, President Recep Tayyip Erdoğan welcomed the development in a telephone call to Abbas. He told the Palestinian leader that the ceremony made him emotional and that Turkey will continue to support Palestine, according to sources close to Erdoğan.

The General Assembly voted on Sept. 10 to allow the flags of Palestine and the Vatican – both have observer status – to be raised at the world body alongside those of member states. The resolution was backed by 119 countries, with 45 abstentions and eight votes against, including Australia, Israel and the United States. Abbas used his speech at the General Assembly to launch a searing attack on Israeli policy and appeal for "countries that have not yet recognized the state of Palestine yet, to do so." "Palestine, which is an observer state in the United Nations, deserves full recognition and full membership," he said.

Abbas said Israel's refusal to release Palestinian prisoners and stop settlement activity in the West Bank and east Jerusalem meant that Palestinians could no longer feel bound by past agreements. "They leave us no choice but to insist that we will not remain the only ones committed to the implementation of these agreements, while Israel continuously violates them," he said. "We cannot continue to be bound by these signed agreements with Israel and Israel must assume fully all its responsibilities as an occupying power." Abbas said Palestinian patience "has come to an end" and described the current situation as "unsustainable." He warned that recent clashes between Israeli police and Palestinians at the Al-Aqsa mosque compound in Jerusalem risk turning a political conflict into a religious one, "creating an explosive situation." "I call on the Israeli government to cease its use of brutal force... particularly its actions at the Al-Aqsa mosque," Abbas said.

Israeli Prime Minister Benjamin Netanyahu denounced his speech as "deceitful" and accused Abbas's words of encouraging "incitement and destruction in the Middle East." "In contrast to the Palestinians, Israel is strictly maintaining the status quo on the Temple Mount," he said. Netanyahu added that Israel was committed to preserve the status quo in accordance with the agreements it has with Jordanian and Egyptian authorities. He further called on Abbas to enter into direct negotiations with Israel "without preconditions." EU foreign affairs Chief Federica Mogherini said Abbas's speech underscored the "urgency" of the need to act now. "There is an if, and on that if we are going to have to work," she told reporters of the Palestinian threat to abandon past agreements.

A recent poll found that most Palestinians favor a return to armed uprising in the absence of peace talks, frustrated with Israel's right-wing government, and that two-thirds want Abbas to resign. Mogherini said the Diplomatic Quartet would revitalize its activities. "The risk (is) that if we don't act... this can be a major source of radicalism not only in the region but worldwide," she said.

In a shift, Egypt, Jordan, Saudi Arabia and the Arab League were invited to Wednesday's meeting of the quartet, along with the foreign ministers of Russia, the United States and Federica Mogherini. The quartet expressed "serious concern" that trends on the ground "are dangerously imperiling" the viability of a two-state solution.

The flag was raised in front of the U.N. secretariat building at the northeast side of First Avenue and 42nd Street, alongside the flag of the Vatican. Palestine and the Vatican are the only non-member observer states at the United Nations. The Vatican flag was raised at the U.N. on Friday, the day Pope Francis visited.
The Palestinian district of East Jerusalem was captured by Israel during the 1967 six-day war and since then Israel has tried to expand its influence over the neighborhood by allowing Jewish settlers to reside in the disputed area. Israeli aggression does not appear only in Jerusalem but also in Gaza Strip.