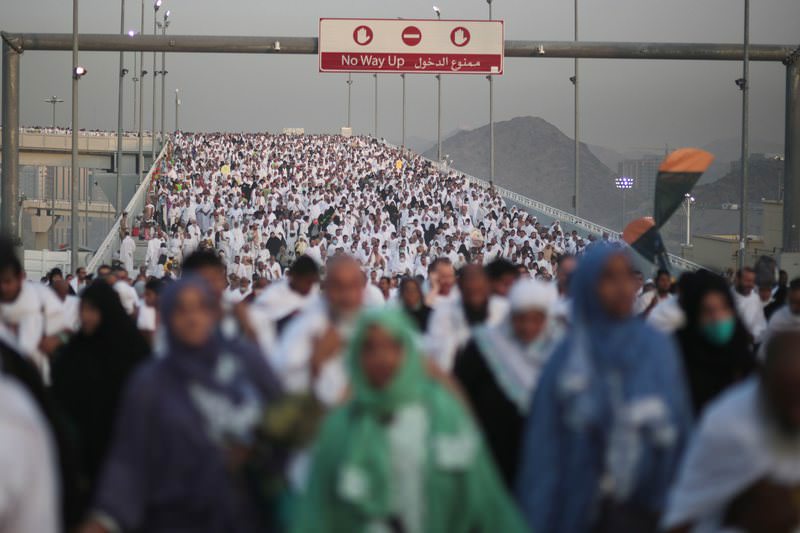 Hundreds of thousands of Muslim pilgrims at the annual hajj, on the first day of Eid al-Adha, in Mina near the holy city of Mecca, Saudi Arabia, Thursday, Sept. 24, 2015. (AP Photo
by French Press Agency - AFP Sep 30, 2015 12:00 am
A senior Iranian diplomat and former ambassador to Lebanon is missing after the deadly stampede at last week's hajj pilgrimage in Saudi Arabia's Mecca, officials in Tehran said on Wednesday.

The news comes as tensions intensified when Shiite Muslim Iran threatened a "fierce" response to Sunni rival Saudi Arabia over delays in repatriating victims of the tragedy, in which at least 769 pilgrims died.

Ghazanfar Roknabadi, 49, who was attending the annual Muslim gathering, is among 241 Iranians Tehran says are still missing after the stampede, which killed at least 239 of the Islamic republic's citizens.

Until last year, Roknabadi was Tehran's envoy to Beirut, a highly sensitive post.

Lebanon is home to the Iran-backed Shiite movement Hezbollah, and is allied with President Bashar al-Assad in the Syrian civil war.

Foreign ministry spokeswoman Marzieh Afkham denied reports by some Arab media that he had travelled to Saudi Arabia under a false name.

"He entered with a normal passport to perform the hajj" and "his identity and that of other missing pilgrims have been provided to Saudi Arabia", she said.

Iranian media published a photo of his passport with a Saudi visa.On Tuesday, Ali Akbar Velayati, a former foreign minister and an adviser to supreme leader Ayatollah Ali Khamenei, said "high-ranking" Iranians were among the missing and the dead.


He called on Riyadh to take the "necessary actions" regarding them.