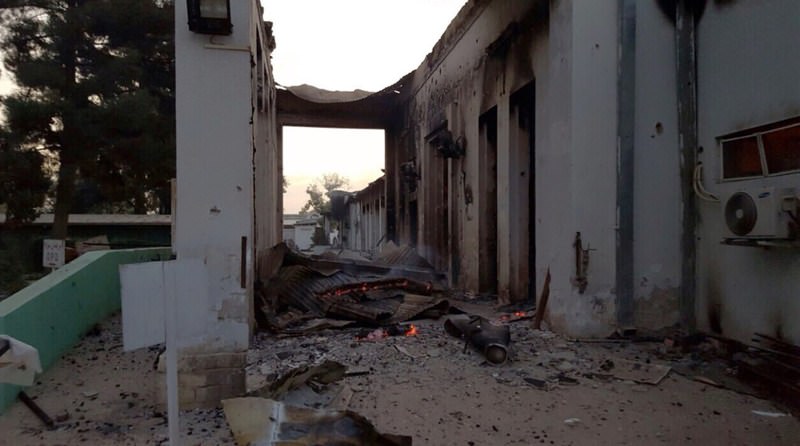 In this photograph released by Doctors Without Borders on Oct.3, fires burn in part of the hospital in Kunduz after it was hit by an air strike.
by Daily Sabah with Wires
Oct 05, 2015 12:00 am

After a suspected U.S. airstrike on a hospital in Kunduz killed 19 people, the U.N. said the bombing could amount to a war crime. U.S. President Barack Obama has pledged to open a full probe into the incident while the medical charity Doctors Without Borders has withdrawn from the Afghan city

U.S. President Barack Obama has pledged to open a full investigation into a suspected U.S. airstrike on an Afghan hospital that killed 19 people, in a bombing the U.N. condemned as "inexcusable." Doctors Without Borders (DWB) said patients burned to death in their beds during a bombing raid that continued for half an hour after U.S. and Afghan authorities were informed the hospital had been hit. "Twelve staff members and at least seven patients, including three children, were killed; 37 people were injured," the charity said. "This attack constitutes a grave violation of international humanitarian law." Washington has promised a "full investigation" into the bombing at the facility, a key lifeline that has been running beyond capacity during fighting that saw the Taliban seize control of the northern provincial capital of Kunduz for several days.

International medical charity Doctors Without Borders said on Sunday it has withdrawn from the northern Afghan city of Kunduz after the deadly airstrike. The humanitarian crisis in the city, which briefly fell to the Taliban last week before the government launched a counteroffensive, has grown increasingly dire, with shops shuttered because of ongoing fighting and roads made impassable by mines planted by insurgents.

"All critical patients have been referred to other health facilities and no [DWB] staff are working in our hospital," said Kate Stegeman, the communications manager for DWB. "Some of our medical staff have gone to work in two hospitals where some of the wounded have been taken," she added. Investigations are continuing into the bombing of the hospital on Saturday, which killed at least 19 people, including 12 DWB staffers.

The group blames a U.S. airstrike. Afghan officials said helicopter gunships returned fire from Taliban fighters who were hiding in the facility. Stegeman said there were no insurgents in the facility at the time of the bombing. The U.S. military said it conducted an airstrike "in the vicinity" of the hospital, as it targeted Taliban insurgents who were directly firing on U.S. military personnel.

Afghan President Ashraf Ghani has said a joint investigation is underway with U.S. armed forces. Obama said that he expected a full accounting of the circumstances surrounding the bombing. The U.S. government promised a full investigation into the incident as the U.N. human rights chief said the bombing could amount to a war crime. In a statement, Obama offered condolences to the victims of what he called a "tragic incident."

In Kabul, the Afghan Ministry of Defense said Taliban fighters had attacked the hospital and were using the building "as a human shield," but the medical aid group denied this. "The gates of the hospital compound were closed all night so no one that is not staff, a patient or a caretaker was inside the hospital when the bombing happened," DWB said in a statement on Sunday. "In any case, bombing a fully functioning hospital can never be justified." Witnesses said patients were burned alive in the crowded hospital after the airstrike. Among the dead were three children being treated.

The Taliban seized Kunduz last Monday but have since withdrawn from much of the city in the face of a government counterattack. Sporadic battles continue as troops attempt to clear remaining pockets of militants. The Taliban's brief seizure of Kunduz marked the insurgent group's biggest foray into a major urban area since the 2001 U.S.-led invasion ended their rule. Afghan forces have been struggling to combat the Taliban since the U.S. and NATO shifted to a support and training role at the end of last year, officially ending their combat mission in the war-torn country. Militants blocked and mined roads as soon as they entered Kunduz to prevent people from leaving and to thwart the government's assault.

Meanwhile, Kunduz's residents have been forced to lock themselves inside their homes without food and electricity as street battles between Afghan forces and Taliban fighters continue in many parts of the city.

The deputy head of the Afghan National Disaster Management Authority, Aslam Sayas, said he was aware of the growing needs of people trapped inside the city. "We are waiting for the security situation to improve to give us an opportunity to reach those needy people," he said. Saad Mukhar, the Kunduz provincial public health director, estimates that more than 70 people have been killed and more than 500 wounded in the city since the fighting began. "I'm afraid that if this situation continues, we will not be able to help our patients because right now we are facing a serious, drastic shortage of medicine," he said.

Rahmatullah Hamnawa, a reporter with Salam Watandar radio, said cooking gas prices have more than doubled. Fuel that was $0.85 per liter before the Taliban moved in is now $1.30 per liter, he said. Grocers and pharmacists who spoke with The Associated Press by telephone from inside the city said they make furtive deliveries after assessing the security situation. Shir Aghan, who runs a general store, said the shops were full of food items, but many shopkeepers had fled to neighboring provinces before the Taliban sealed the city. "People call me, and if it's safe I'll go out and sell them what they need," he said. Local television showed live footage of police officers handing bread to children, one of whom said he had not eaten for three days.