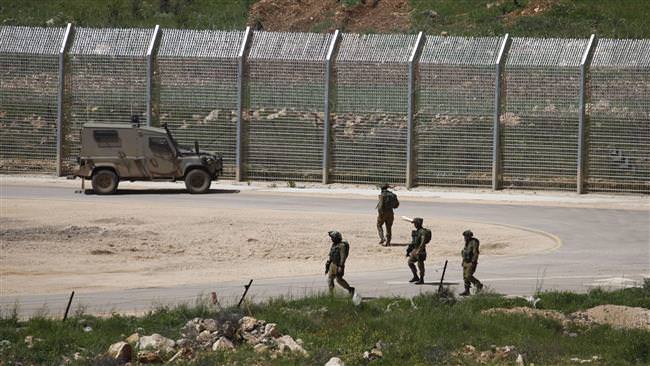 Israeli forces patrol along the fence in the occupied Golan Heights on the border with Syria, on April 27, 2015. (AFP Photo)
by Anadolu Agency
Oct 06, 2015 12:00 am
Israel's Defense Ministry announced Tuesday that it had completed the construction of a "smart" security fence around 12 Israeli communities located near the border with the blockaded Gaza Strip.

The fence comes as part of a plan to bolster security for Israeli communities near the strip following last year's devastating military onslaught on the coastal territory during which Palestinian resistance groups had retaliated by attacking border communities.

Israel's channel 7 reported that the cost of the project -- which involves dozens of kilometers of "smart" fencing -- has been estimated at some 30 million Israeli shekels (roughly $7.7 million).

The Defense Ministry first announced plans to build the fence in September 2014 -- one month after its 51-day military onslaught on Gaza.

During last year's conflict, the Ezzeddin al-Qassam Brigades, the armed wing of Palestinian resistance group Hamas (which has governed the Gaza Strip since 2007), used underground tunnels to attack Israeli military bases and communities near the border.

According to the Israeli army, the Qassam Brigades used tunnels on four separate occasions to infiltrate Israeli territory, where its fighters succeeded in killing 12 Israeli soldiers.

The Israeli army says it destroyed a total of 32 tunnels during the conflict. Palestinian resistance factions, however, say they have since dug new tunnels for use in future conflicts.

In July and August of last year, Israel launched a weeks-long military offensive against the Gaza Strip with the stated aim of staunching rocket fire from the blockaded coastal enclave.

Over 2,160 Palestinians, mostly civilians, were killed -- and some 11,000 injured -- in the offensive, which finally ended with a cease-fire deal signed in August.