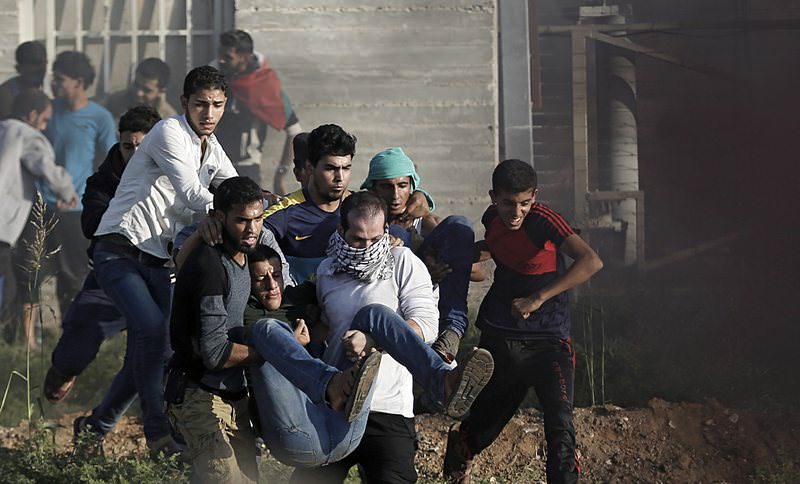 by Daily Sabah with Agencies Oct 09, 2015 12:00 am
The soaring Israeli violence against Palestinians in Jerusalem spread to the Gaza Strip Friday, with Israeli troops killing six in clashes on the border and Palestinian faction Hamas calling for resistance.

A fresh wave of stabbings also hit Israel and the West Bank, including a revenge attack by a Jewish suspect that wounded two Palestinians and two Arab Israelis.

The Gaza Strip had been mainly calm as unrest has shaken annexed east Jerusalem and the occupied West Bank in recent days.

But clashes broke out on Friday east of Gaza City and Khan Yunis along the border with the Jewish state, with Israeli forces opening fire and killing six Palestinians including a 15-year-old, and wounding 80, according to medics.

Hundreds of Palestinians, some with their faces covered by keffiyeh scarves, defied the soldiers by making victory signs and throwing stones.

It was the deadliest clash in Gaza since the summer 2014 war with Israel.

The Palestine Liberation Organization's Dr. Hanan Ashrawi on Sunday accused Israel of enforcing "collective punishment" on Palestinians and attempting to create the conditions for a military operation in the occupied Palestinian territories.

She also highlighted Palestinian anger at the alleged impunity of hardline Israeli settlers for regular attacks on Palestinians and their land.

After the Israeli aggression in Jerusalem, Hamas's chief in Gaza called for an intifada, or uprising, and urged further resistance.

In Friday prayer at a mosque in Gaza City, Ismail Haniya said "we are calling for the strengthening and increasing of the intifada".


"It is the only path that will lead to liberation," he said. "Gaza will fulfil its role in the Jerusalem intifada and it is more than ready for confrontation."

In a number of Arab towns in Israel's north, masked youths blocked roads with burning tyres and hurled fire bombs and stones at police who arrested three suspects in Taibe, two near Ara and one in Qalansuwa before the riots were dispersed.

Stabbing attacks in the West Bank, Jerusalem and Israel itself along with rioting have raised fears of a third Palestinian intifada, following a first that began in 1987 and a second in 2000.

Those two conflicts cost the lives of some 5,000 Palestinians and around 1,100 Israelis.

The enclave has been hit by three wars with Israel since 2008. A 50-day Israeli aggression on Gaza in the summer of 2014 left more than 2,200 people in the territory dead, mostly civilians, and 100,000 homeless.

On Friday, video footage appeared online of the incident showing the veiled woman was shot dead by Israeli troops after she refused to remove her scarf.

There have been 13 stabbings since Saturday, including the revenge assault. Five of the alleged attackers have been killed.