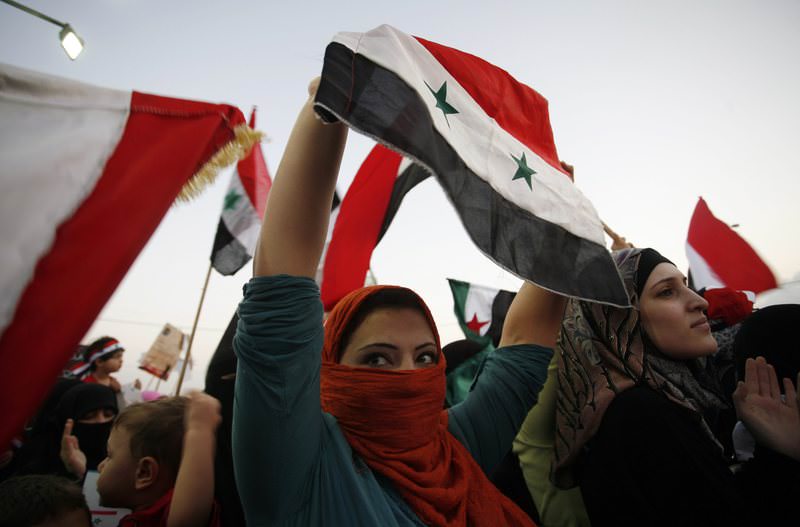 Syrian women hold the national flag and protest in front of the Syrian embassy condemning the killing and torturing women in Syria by Bashar al-Assad's regime, in Amman, Jordan, Thursday, Sept. 29, 2011. (AP Photo)
by Oct 09, 2015 12:00 am

When Saliha Ben Ali's teenage son was killed after leaving Belgium to fight for ISIS in Syria, she wanted to do what she could to stop other mothers from going through similar heartbreak.

"My message is try to find some help, please speak about this, don't be alone," she said at a discussion on Friday about the role women can play in fighting the militant group's violent ideology.

Almost 30,000 foreigners have joined ISIS and other militant groups to fight in Iraq and Syria, according to a study published by the United States Congress last month, thousands of them from western countries.

The organization Ben Ali founded, Society Against Violent Extremism (SAVE) Belgium, works with families to try to protect young people from extremist recruiters, and helps families whose children have already left for the Middle East.

Social media is a vital tool for extremist recruiters as it enables them to circumvent parents and more moderating religious influences to speak to vulnerable young people directly.

"My son was radicalized in three months only, and when I understood what happened, it was too late," Ben Ali said at the Women in the World summit in London.

Mothers can help by watching for signs of radicalization, and getting help when they have concerns, she said.

While all those who fight for ISIS are men, many women have also left western countries for Iraq and Syria and are critical to the group's survival, said Sasha Havlicek, director of the Institute for Strategic Dialogue, a London-based thinktank.

"ISIS's plan isn't just about foreign fighters, it's about building a state," she told the Thomson Reuters Foundation in an interview.

The group controls swathes of territory in eastern Syria and northern Iraq where it has declared an 'Islamic' caliphate.

Though extremist groups have recruited women throughout history, the way in which ISIS systematically targets them is "unprecedented" according to Havlicek, citing her research on the social media activity of women who have gone to join the militant group.

"Women are not a sideshow, they (ISIS) have had a very explicit and concerted strategy to recruit women and they've done incredibly well ... they have a marketing department, and it's very high tech," said Havlicek.

Women who join ISIS "are rejecting the model of 'Sex and the City' empowerment and saying it doesn't work for them," she said.

Societies which value girls' education are less susceptible to extremist ideology, while extremist militant groups who claim they are Muslims seek to rein in women's rights, said Sara Khan, co-director and founder of Inspire, a British anti-extremism charity.

"Whenever we see religious extremists come to power, one of the first things we see, guaranteed, is the curtailing of women's rights ... Why is it the Taliban tried to assassinate Malala? Why is it that Boko Haram closed down schools?"

It is vital to confront ISIS's claim to religious legitimacy by celebrating the history of Muslims who have embraced women's rights, and highlighting the fact that the vast majority of those actively opposing the group are Muslims, she said.