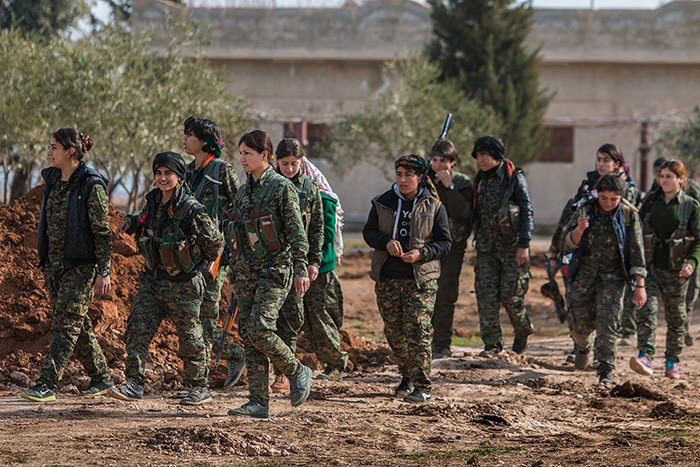 Kurdish female fighters of the YPG carry their weapons as they walk in the frontline of Kery Sabee village, northeastern Syria (AP Photo)
by Mehmet Çelik
Oct 13, 2015 12:00 am

A report published by Amnesty International revealed the human rights violations by the PKK terrorist organization’s Syrian affiliate YPG. The report backed the strong claims of Arab and Turkmen population being driven to make northern a Syria YPG-friendly zone

Amnesty International released a report on Monday, showing human rights violations by the People's Protection Unit's (YPG), the non-Kurdish inhabitant in areas under their control in northern Syria, including forced displacement and demolishing houses.

The YPG is the armed wing of Syria's Democratic Union Party (PYD), an ally of the United States-led coalition fighting the Islamic State of Iraq and al-Sham (ISIS) and affiliated with the PKK, which is recognized as a terrorist organization by Turkey, the U.S. and EU.

The Amnesty report says that the crimes committed by the YPG amount to war crimes and that non-Kurdish, mostly Turkmen and Arab, inhabitants of villages in the de facto autonomous Kurdish administration were forced out of their homes.

Amnesty quotes Ciwan Ibrahim, the head of the Kurdish internal security force known as Asayish, in the report admitting there had been forced displacements, but that they were "isolated incidents" and that civilians had been moved "for their own safety." However, the report says that the findings show the forced displacement is mostly against non-Kurdish villages captured by the YPG.

Amnesty interviewed 37 individuals who said they had experienced Kurdish abuse in Hasakah and Raqqah provinces.

"Satellite imagery of the village of Husseiniya taken in June 2014 and June 2015 analyzed by Amnesty International reflect that 225 buildings were standing in 2014, but that only 14 remained in 2015, a 93.8 percent reduction in one year. The destruction reflected in the satellite imagery is not consistent with shelling but rather the demolition of the village. Residents said the YPG carried out the demolitions in February 2015, displacing most residents to nearby villages and to the city of Qamishli," the report says.

The report says residents had fled the village due to clashes between the YPG and ISIS in early 2015, but when they came back after the YPG took over, their homes were demolished: "In mid-February we heard that [ISIS] was retreating from the Tel Hamees countryside and the sound of coalition warplanes intensified so we decided to leave to Qamishli. … We left before the YPG entered and returned in the beginning of March 2015. When we came back we saw our homes were demolished. … We don't know who did it, but who else was here other than the YPG?" a villager interviewed by Amnesty researchers on the field said.

In late September, United Nations Independent International Commission of Inquiry on Syria also said in a report that the YPG had committed human rights violations in occupied areas of northern Syria.

"Following the YPG's retaking of the previously ISIS-controlled areas of Tal Abyad in early July and villages in the Tel Tamer region of al-Hasakah, YPG fighters reportedly looted houses belonging to Arab villagers," Paulo Sergio Pinheiro said, presenting the report to the U.N. Human Rights Council in Geneva, and added that the U.N. has indicated the YPG's human rights violations in its previous reports.

"They [YPG] pulled us out of our homes and began burning them. … Then they brought the bulldozers and they began demolishing the homes. … Every time I tried to come near the house they would push me back. … The people that came were wearing green camouflage uniforms," a woman from Husseiniya interviewed by Amnesty International said.

Forced displacement of non-Kurds in villages

Amnesty's report also says that YPG forces had forcefully displaced non-Kurds from their villages under charges that the villagers supported ISIS since they spoke Arabic. The villagers, although unarmed, were forced out of their villages and threatened to be killed if they remained in their homes, the report says.

"They [YPG] told us we had to leave or they would tell the U.S. coalition that we were terrorists and their planes would hit us and our families," a man from the village of Reneen south of Suluk who was interviewed by Amnesty researchers said. "We left so we would be safe from their snipers and the planes."

Speaking to Daily Sabah, Syrian Network for Human Rights (SNHR), a London-based human rights watchdog, has said that SNHR arrived at the same findings as a result of their research of YPG violations.

"We confirm what Amnesty documented; we have the same results and have been working for five months on a huge report on al-Hasakah. There are also extrajudicial killings and enforced disappearance cases from PYD toward the Arabic component. As Amnesty mentioned, the enforced displacement is considered a war crime," Fadel Abdel Ghany, the head of the SNHR said.

Also speaking to Daily Sabah, Nadim Houry, deputy director of the Middle East and North Africa Division at Human Rights Watch (HRW), said: "HRW has not conducted its own field investigation into the reports that the PYD displaced and demolished homes in certain Arab villages. So we don't have our own research to develop a clear position on this. We have interviewed some people in Turkey who also reported to us that they had been driven out by the YPG."

In a July 29 report by Daily Sabah, Fehim Isa, who is commander of the leading Turkmen Brigade in Syria, had also made similar remarks on the YPG. "The PYD has close affiliations with the Syrian regime. The Kurds receive weapons aid from [Syrian leader Bashar] Assad and attack Turkmens and other opponents," Isa said. "The PYD forces Turkmens to evacuate the regions it saved from ISIS. Caught between two fires on the Turkish border, Turkmens are experiencing the most difficult period of their history," Aleppo-based Fatih Sultan Mehmet Brigade Commander, Mahmut Shaban Suleiman, said in the same report.

Amnesty has also said that despite claims by the Autonomous Administration that its forced displacement of civilians was not arbitrary, the report's findings point out otherwise. "This report documents cases in which there was no such justification. Amnesty International considers that these instances of forced displacement constitute war crimes," the report concluded.

Human rights organizations have also accused the YPG of committing other violations such as extrajudicial detainment, killings, and using child soldiers, despite condemnation from the international organizations.

Amnesty International, detailed on the PYD's extrajudicial activities against civilians in a report released on September 7.

"The PYD-led autonomous administration cannot use their fight against terrorism as an excuse to violate the rights of individuals in areas under their control," said Lama Fakih, senior crisis advisor at Amnesty International, and added, "It is clear that many detainees have faced grossly unjust trials in a serious violation of their rights. Everyone should have the right to defend themselves before fair courts. Instead of trampling all over people's rights in the name of security and counterterrorism the PYD-led administration should ensure that the rights of detainees are respected."

A report titled "Forcible recruitments and the deployment of child soldiers by the Democratic Union Party in Syria" prepared by KurdWatch has reported the child recruits by YPG/YPJ are as young as 12-year-old, "The recruitment of child soldiers Along with adults, there has been an increase in the recruitment of minors as young as twelve over the past fourteen months. Sometimes the recruitment was forced; sometimes the children and adolescents joined the People's Defense Units voluntarily, but against the expressed will of their parents. It is notable that many girls are among the minors who have been recruited. While adult conscripts are trained in Syria, the PYD typically seems to bring minors to Iraqi Kurdistan."

The Human Rights Watch has also reported the cases of recruitment of child soldiers in a report released on July 15, 2015.

"The Kurdish armed group that controls territory in northern Syria, despite some progress, is still not meeting its commitment to demobilize child soldiers and to stop using boys and girls under 18 in combat," the report said.

"My daughter went to school and was taken from there by a group of YPJ," a father of a 14-year-old girl said in the report and added, "We knew nothing about her until a YPJ commander called and informed us that she had joined YPJ."