Israelis and Palestinians on guard amid unabated violence 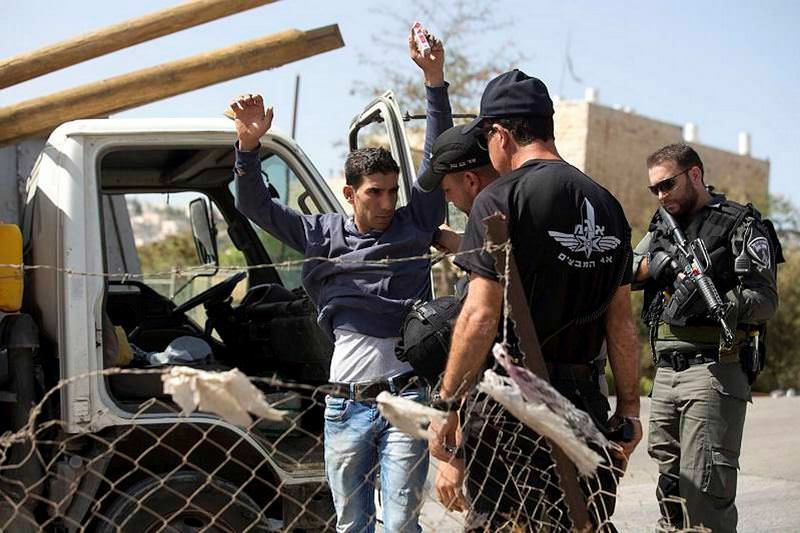 Despite peaceful statements from Palestinian politicians tensions between Israelis and Palestinians continue to escalate as both sides target each other every day. Israeli forces impose harsh security measures kill Palestinian protesters arbitrarily

A wave of stabbing attacks has spread fear in Jerusalem and much of Israel, shattering the brittle sense of security Israelis had managed to restore a decade after Palestinian suicide bombings terrified the nation. The public panic has also exposed an ugly side, with some enraged residents calling for Arabs to be kicked out of their apartment buildings and many Palestinians afraid to venture out of their homes for fear of getting mixed up with vigilante mobs. The month-long violence has mostly been confined to sporadic stabbings and clashes between Palestinian protesters and police. It has claimed the lives of eight Israelis and some 30 Palestinians, a far cry from the years of near daily shooting and bombing attacks that killed more than 1,000 Israelis and thousands of Palestinians in the early 2000s. But already, a siege mentality has taken hold.

Municipalities have increased security patrols, the government has eased gun licensing procedures and public officials, including Jerusalem Mayor Nir Barkat, are openly carrying personal weapons and encouraging the public to do the same. Several bystanders have already subdued attackers, but there have also been incidents of quick gunfire that have sparked fears among Palestinians that if they are even perceived to be a threat, they might get shot. "People are afraid. They fear being shot, so they prefer to stay at home until this thing is over," said Zakariya Alqaq, a Palestinian university professor.

The fears have sometimes turned into outright panic. After the bus station attack Wednesday, word of a potential second attack sent a swarm of security forces and civilians in a mad dash down a central road, until it was declared to be a false alarm. On Thursday, police sealed off streets in and around Tel Aviv after reports of a suspicious vehicle. Earlier this week, an Israeli man stabbed a fellow Jew in an IKEA parking lot in northern Israel after mistaking his dark-skinned victim for an Arab.

Palestinian residents of Jerusalem have watched as police or bystanders have opened fire on assailants, in many cases killing them. When attackers have been apprehended alive, angry mobs have often kicked or punched them. Many Palestinians in east Jerusalem have opted to remain at home, and Arab citizens of Israel have complained of being afraid to speak Arabic in public. In one widely shared Facebook post, a Palestinian living in Tel Aviv said a neighbor demanded in a letter to building residents that he be "checked out" in light of the security situation. Mohammed Abu Sabih, a resident of east Jerusalem who sells produce at the Jerusalem market, said Palestinians in Jerusalem are warning each other not to walk around with their hands in their pockets so that no one suspects them of hiding a knife. "It's not safe for us," said Abu Sabih, 24, who said he asked his Jewish boss to pick him up and drive him home from work as a precaution.

Palestinians torched a site revered by Jews in the West Bank overnight. Palestinian President Mahmud Abbas quickly condemned the fire at the site in the northern city of Nablus known as Joseph's Tomb. Video showed what looked like an extensive blaze and the Israeli army called it "a despicable act" of desecration. The arson came as Palestinians called for a "Friday of revolution" against Israel, and Jerusalem police barred men under 40 from attending the main weekly prayers at the flashpoint Al-Aqsa mosque, seeking to keep young protesters away. Israeli security forces have deployed massively in Jerusalem after two weeks of Palestinian attacks in the city and across Israel. Beginning Sunday, some 300 soldiers will reinforce police, stretched thin by the unrest. The last time soldiers deployed in such large numbers was in 2002, during the second Palestinian uprising, or intifada, according to a security source.

Israeli Prime Minister Benjamin Netanyahu on Thursday reiterated his willingness to meet Abbas, while accusing him of inciting and encouraging violence. "It's time that president Abbas stops not only justifying it, but also calling for it," Netanyahu told reporters. U.S. Secretary of State John Kerry, who plans to travel to the region "in the coming days" to try to calm tempers, also warned the Palestinian leader not to incite violence. Abbas has called for peaceful protest, but had not explicitly condemned any attacks in the recent wave of unrest until Friday's statement on the holy site. He said the "illegal" arson "offends our culture and our religion and our morals." He said a committee would investigate and the damage would be repaired. The Palestinian leader has faced heavy criticism over a statement on Wednesday night in which he claimed a Palestinian youth had been executed. Israel has released photos and videos which they say show the 13-year-old, accused of taking part in two stabbing attacks, recovering in hospital.

Joseph's Tomb, inside a compound in the Palestinian refugee camp of Balata in Nablus, has been the scene of recurring violence between Israelis and Palestinians. Many Jews believe it to be the final resting place of the biblical Joseph, while Muslims believe that an Islamic cleric, Sheikh Yussef (Joseph) Dawiqat was buried there two centuries ago. The shrine is under Palestinian control and off-limits to Israelis except on escorted trips organized by the army. The Israeli military said it would make the repairs necessary to allow visits to continue and "take all measures to bring the perpetrators of this despicable act to justice." There were warnings that the fire could worsen the unrest. "Burning Joseph's Tomb is a dangerous attempt to exacerbate an already tense environment," Nickolay Mladenov, U.N. special coordinator for the Middle East peace process, said on Twitter. There has been a spate of stabbing attacks and violent protests have swept the Palestinian territories. Seven Israelis have been killed and dozens wounded. Thirty-three Palestinians have also died, including alleged attackers, and hundreds more been wounded in clashes with Israeli forces. In the two intifadas of 1987-1993 and 2000-2005, thousands of people were killed and many more wounded in near daily violence.

On Wednesday, police began setting up checkpoints in parts of annexed east Jerusalem, including a neighborhood which is home to three Palestinians who carried out gun, knife and car-ramming attacks this week. The move followed a decision by Netanyahu's security cabinet authorizing police to seal off or impose a curfew on parts of Jerusalem. Netanyahu has come under immense pressure to halt the violence. Abbas again called on Wednesday night for peaceful resistance, but young people fed up with Israel's occupation and the lack of progress in peace efforts have grown tired of his leadership. The attackers seem to be mostly acting on their own, with no mastermind for security forces to pursue. In another incident on Friday a Palestinian man wearing a yellow vest with the word 'press' written on it stabbed and wounded an Israeli soldier. The army said the attacker was shot and killed by other soldiers. The attack took place just a few meters from a Palestinian protest after Muslim noon prayers in the West Bank city of Hebron.