Egyptians cast their votes during 1st round of parliamentary elections 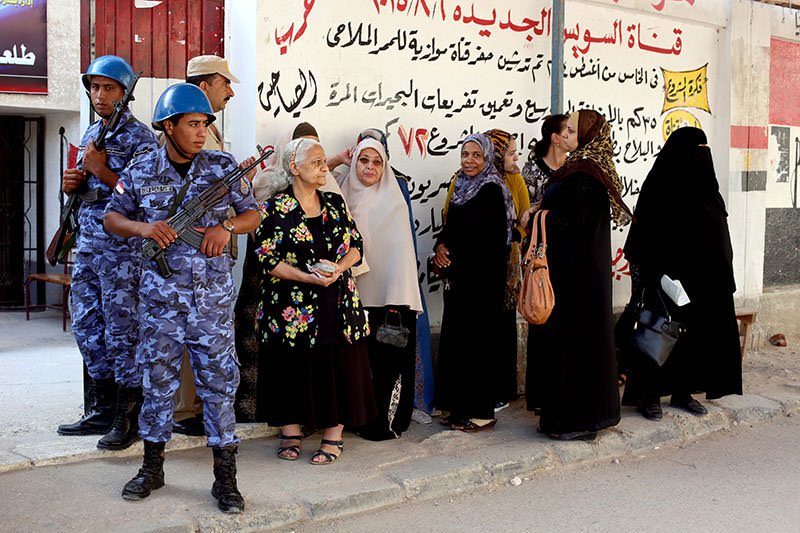 Voters wait to cast their votes outside a polling station during the first round of the parliamentary elections, in Behira, north of Cairo, Egypt, Sunday, Oct. 18, 2015. (AP Photo)
by Anadolu Agency
Oct 18, 2015 12:00 am
Egyptians went to the polls on Sunday to elect members of a new parliament, the first since the ouster of President Mohamed Morsi -- Egypt's first democratically elected leader and a Muslim Brotherhood leader -- in mid-2013.

Voting for Egyptians living abroad kicked off on Saturday for two days, and a second round of expatriate voting will be held on Nov. 21 and 22.

More than 55 million Egyptians are eligible to vote in the two-phase election, in which 448 parliamentary candidates will be chosen for individual seats and another 120 from party lists.

A total of some 5,420 candidates are vying for assembly seats in the two-phase polls.

According to Egypt's official electoral commission, 81 local NGOs and six foreign organizations are monitoring the ballot.

The vote is being boycotted by the political parties that supported Morsi, including the moderate-Islamist Wasat Party and the Strong Egypt Party of former Muslim Brotherhood leader Abdel-Moneim Abul-Futuh.

The April 6 Youth Movement, which was at the forefront of a popular uprising that ousted autocratic President Hosni Mubarak in 2011, is also boycotting the polls.

The election had been originally slated for March, but was postponed following a decision by Egypt's constitutional court, which ruled that the laws governing Egypt's electoral districts were unconstitutional.

Egypt has not had a parliament since the dissolution of its 2012 assembly.

In a televised speech on Saturday, Sisi, a former army chief who spearheaded Morsi's ouster, called on all Egyptians to take part in the vote.

The parliamentary election represents the final phase of a political "roadmap" imposed by the army following Morsi's overthrow.

The army's roadmap also included a constitutional referendum and a presidential election, the latter of which brought Sisi to power.

Critics of Egypt's military-backed regime, however, say the polls are being held in the absence of any genuine opposition.