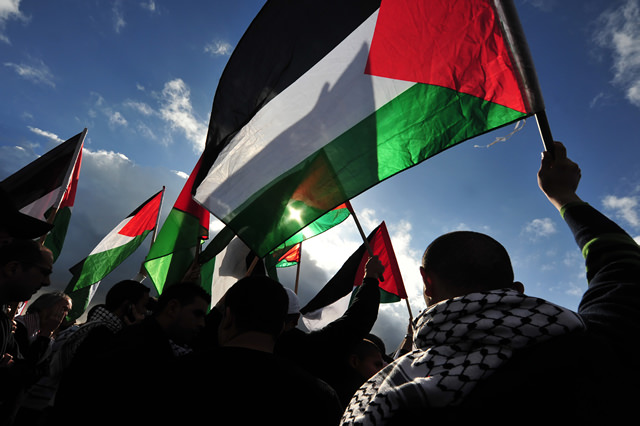 by Anadolu Agency
Oct 18, 2015 12:00 am
Knives, a vegetable peeler and a screwdriver. These have been the tools used in the Palestinian stabbing attacks that have been reported almost daily in occupied East Jerusalem this month.

Only in one case was a gun also used in these so-called "lone-wolf" attacks, which have killed five Israelis and have ended with most of the alleged Palestinian attackers being shot by police, 13 of whom were killed as a result.

The current trend of "lone wolf" attacks follows a similar outbreak last year, when individual Palestinians used cars and knives to attack Israelis in what became known as the "car intifada".

Then as now, Israeli security forces lamented the difficulties associated with preventing such attacks, in which attackers use any weapon at hand without planning or guidance from any organized force.

"They use knives or cars, or simply try to snatch weapons [from Israeli security personnel] because they don't have any in reach as they did during the second intifada," read one column published Sunday on Israeli newspaper Yedioth Ahronoth's website.

"They want to be hailed as heroes on the internet," it added, claiming that social media postings declaring them as such had served to motivate many young Palestinians.

He has also cast blame for the trend on the Palestinian Authority (PA), which he has accused of spreading "malicious lies" about alleged Israeli plans to take over administrative control of East Jerusalem's flashpoint Al-Aqsa Mosque complex, Islam's third holiest site.

Palestinian national security expert Zakaria al-Qak, who is also a professor at Al-Quds University, however, attributed the recent spate of "lone wolf" attacks to mounting frustration among Jerusalem's Palestinian youth.

"It is an accumulation of problems. It's an alarm bell that this situation [Israel's decades-long occupation of Palestinian land] can't continue," al-Qak told Anadolu Agency.

"These are lone wolves, acting by themselves... They were born after Oslo [i.e., the 1993 Oslo Accords between Israel and the PA]," he said. "They are young and hail mostly from marginalized groups."

Al-Qak went on to say that the 1993 Oslo Accords, which established the PA in the West Bank and the Gaza Strip, had served to isolate Jerusalem's Palestinian residents by leaving them without leadership.

"They [Jerusalem's Palestinian residents] were left out of the equation [by Oslo]. They have no connection to the PA," said al-Qak.

"The politicians in Ramallah [where the PA is based] talk about Jerusalem in their slogans, but they aren't doing anything to help its people," he added.

Al-Qak went on to assert that both Palestinian politicians and the wider Arab world had thwarted attempts to build a strong political leadership in Jerusalem able to fight for the rights the city's Palestinian residents independently of the PA.

"Now they are paying the price, because the leadership's role is to shape public opinion," he said. "When you don't have that leadership, you have the young generation taking the lead, as you see now."

On the night of Oct. 3, Fadi Alloun, a 19-year-old Palestinian, was shot dead by police. The police said he had stabbed an Israeli in Jerusalem's Old City, on the same night two other Israelis had been killed nearby in a separate stabbing incident.

Video released after Alloun's death, however, showed that he had been shot by police at the request of a group of Israelis who had been chasing him.

He appeared to be unarmed at the time of his death.

The video was the first of several that appeared to show young Palestinians being gunned down by Israeli security forces while unarmed or surrounded.

On Wednesday, nine Palestinian and Israeli human rights groups issued a statement in which they asserted: "Too often, instead of acting in a manner consistent with the nature of each incident, police officers and soldiers are quick to shoot to kill."

The joint statement went on to criticize the Israeli media, police and politicians for encouraging a shoot-to-kill policy.

"They [the security forces] are only allowed to use lethal force if someone's life is threatened," Amnesty International researcher Deborah Hyams told Anadolu Agency. "They should not be shooting to kill in the way that we have seen in a number of cases."

"If the suspect is surrounded and not [immediately] endangering anyone, then they should be arrested or the least lethal measure should be used," she said.

"Even if they have a knife but are not about to stab anyone, they should not be shot," she added.

Al-Qak, for his part, said that such a policy only served to "further aggravate the situation".