US cuts aid to Palestinian Authority, increases aid to Israel 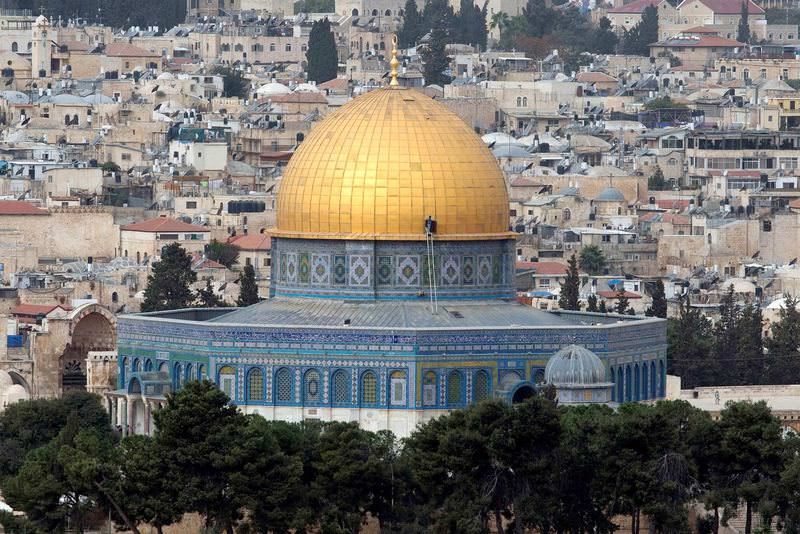 A man stands on a ladder on the roof of the Dome of the Rock at the Muslims' holy site Haram al-Sharif and known as the Temple Mount to Jews in Jerusalem.
by Daily Sabah with Wires Oct 26, 2015 12:00 am

Amid high tensions, a U.S. official said the economic aid to Palestine will be cut for ‘unhelpful actions' after an Israeli official last week said defense aid given to Israel by the U.S. will be extended and increased

The United States is cutting economic aid for the Palestinian Authority, partly because of "unhelpful actions" by the Palestinians, a U.S. diplomat said on Saturday. News site al-Monitor earlier said the U.S. State Department intends to reduce aid for the West Bank and Gaza in fiscal 2016 from $370 million to $290 million. A U.S. State Department official, travelling with Secretary of State John Kerry on a trip to Amman, confirmed there would be a cut. "The decision to reduce assistance to the Palestinian Authority was made this past spring," he told reporters. "There were several factors contributing to this decision, including unhelpful actions taken by the Palestinians and constraints on our global assistance budget." The cut was not directly linked to the wave of violence that is currently gripping Israel and the Palestinian territories, the official said. The source added, however, "We have made clear our concern about inflammatory rhetoric over these past few weeks." Al-Monitor, which was quoted by the Israeli newspaper Haaretz, said the cut followed mounting criticism in the U.S. Congress about Palestinian "incitement".

However, last week an Israeli official said that the defense aid to Israel will be bolstered despite the tensions in Israel and dispute over the nuclear deal with Iran. Israel and the United States have resumed talks on future defense aid that Prime Minister Benjamin Netanyahu suspended in protest at the Iran nuclear deal, the Israeli ambassador to Washington said on Sunday. The allies had been looking to agree on a 10-year aid package to extend the current U.S. grants to Israel worth $3 billion annually, which are due to expire in 2017. But Netanyahu froze negotiations ahead of the July deal reached between Iran and world powers, which Israel deems insufficiently stringent. "With the nuclear deal now moving ahead, Israel is also moving ahead, hoping to forge a common policy with the United states to address the continuing dangers posed by Iran," Ambassador Ron Dermer said in a Facebook post. "Discussions over a new Memorandum of Understanding between Israel and the United States, which had been on hold for some time, resumed this past week in Washington," he said, using a term for the defense-aid agreement.
RELATED TOPICS