120,000 displaced in Syria in October because of Russian airstrikes 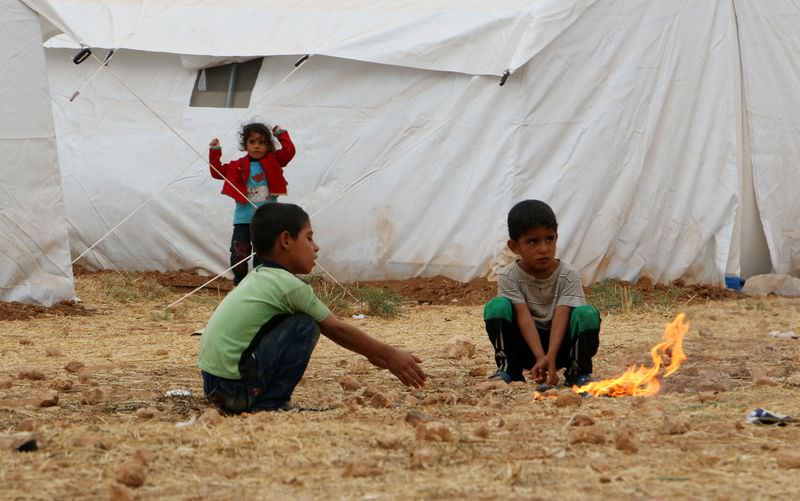 by Daily Sabah with Wires Oct 27, 2015 12:00 am
At least 120,000 people were displaced in Syria's Aleppo, Hama and Idlib governorates - the centre of the Russian-backed Assad regime offensive - this month, the United Nations said on Monday, more than doubling an earlier estimate of 50,000.

Russia says it has destroyed more than 800 terrorist targets in Syria since it began its campaign of air strikes on Sept. 30, an intervention Moscow says is aimed at destroying ISIS terrorists, but which Washington says is also targeting moderate rebels opposed to Syrian dictator Bashar al-Assad.

More than six million Syrians have been displaced in the four-year-old civil war.

In its first report on the humanitarian impact of the offensive, the U.N. Office for the Coordination of Humanitarian Affairs also said several hospitals had been hit from the air and women and children had been killed by cluster bombs.

The report also noted that a push by ISIS militants had cut the road from Hama to Aleppo on Oct. 23, putting 700,000 people in government controlled areas of western Aleppo city at risk, it said, without elaborating.

A map in the report showed how displaced people were fleeing north from the offensive towards the Turkish border crossing at Bab al-Hawa and to areas of northern Syria under the control of PKK's Syrian affiliate Democratic Union Party (PYD) and its armed wing People's Protection Units (YPG) terrorists.

It also showed seven areas described as concentrations of Russian air strikes, five of them in the zone controlled by armed opposition forces and the terrorist group Al-Nusra, one in the ISIS-controlled area, and one in a contested zone.

At least 80,000 people were displaced in Idlib and Hama governorates but local humanitarian organisations say that number could be more than 100,000, the report said. In Aleppo province, at least 44,568 people fled al-Hader, Tel ed-Daman and Jebel Saman between Oct. 15 and Oct. 25.

"Eyewitnesses have recounted incidents of civilians vacating entire villages in anticipation of further government expansion in the area. Al-Hader, a town of 25,000 people has been completely emptied out over the last week," it said.

Health agencies had reported air strikes targetting hospitals and health facilities six times between Oct. 1 and Oct. 23, particularly in Muhradah and central Hama, and an air strike on a clinic in Sarmin in province Idlib killing two medical workers and 10 civilians on Oct. 20.

In Aleppo governorate, there had been five aircraft attacks reported against hospitals and health facilities with a concentration in Jabal Saman sub-district, it said.

Two field hospitals in Aleppo were reportedly hit by bombs, causing "a number of casualties and their immediate closure due to severe infrastructural damage", while a third field hospital was partially damaged by another airstrike.

De-mining groups had reported two women and three children were killed by cluster bombs in Kafar Karmsin in Idlib province and another three children killed in rural Aleppo, it said.