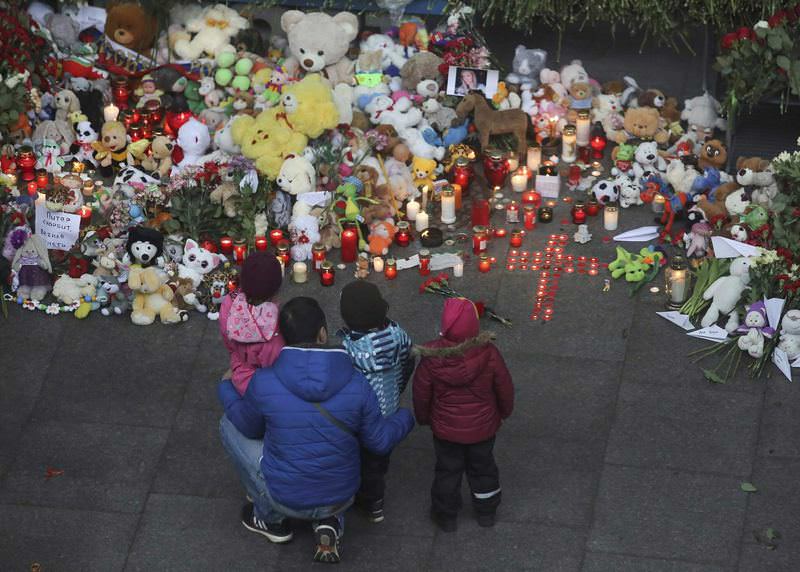 A man and children mourn near a makeshift memorial for victims of a Russian airliner that crashed in Egypt, outside Pulkovo airport in St. Petersburg.
by Daily Sabah with Wires Nov 02, 2015 12:00 am

Officials said the investigation into why the Russian passenger plane crashed in the Sinai, killing all 224 people on board, continues while an ISIS-affiliated group claimed responsibility. Hundreds of people mourned for the victims

Russia has grounded Airbus A321 jets flown by the Kogalymavia airline, Interfax news agency reported on Sunday, after one of its fleet crashed in Egypt's Sinai Peninsula, killing all 224 people on board. The A321, operated by the Russian airline under the brand name Metrojet, was carrying holidaymakers from the Red Sea resort of Sharm el-Sheikh to St Petersburg when it went down soon after daybreak on Saturday. Interfax said the Russian transport regulator Rostransnadzor had told Kogalymavia to stop flying A321 aircraft until the causes of the crash were known. However, RIA news agency cited a Kogalymavia representative as saying that the airline had not received the order from Rostransnadzor. Egyptian and Russian investigators will begin examining within hours the contents of two "black box" recorders recovered from the airliner, which crashed into a mountainous area of central Sinai shortly after losing radar contact near cruising altitude.

A militant group affiliated to Islamic State of Iraq and al-Sham (ISIS) in Egypt said in a statement that it brought down the plane "in response to Russian airstrikes that killed hundreds of Muslims on Syrian land", but Russia's Transport Minister Maxim Sokolov told Interfax news agency the claim "can't be considered accurate". Three carriers based in the United Arab Emirates airlines - Emirates, Air Arabia and flydubai said on Sunday they were re-routing flights to avoid flying over Sinai. Two of Europe's largest carriers, Lufthansa and Air France-KLM, have already said they would avoid flying over peninsula while awaiting an explanation of the cause.

Emergency services and aviation specialists resumed their search at the crash site which is spread over more than 15 square km early on Sunday with 100 Russian emergency workers on their way to help recover bodies and gather evidence. Russia, an ally of Syria's Bashar Assad, launched air raids against opposition groups in Syria including ISIS on Sept. 30. ISIS, the ultra-hardline group that controls large parts of Iraq and Syria, has called for a holy war against both Russia and the United States in response to airstrikes on its fighters in Syria. Sinai is the scene of an insurgency by militants close to ISIS, who have killed hundreds of Egyptian soldiers and police and have also attacked Western targets in recent months. Much of the Sinai is a restricted military zone. Militants in the area are not believed to have missiles capable of hitting a plane at 30,000 feet. ISIS websites have in the past claimed responsibility for actions that have not been conclusively attributed to them. Officials say there is no evidence to suggest so far that a bomb could have brought down the plane.

An Egyptian ground service official who carried out a pre-flight inspection of the Russian passenger plane said Sunday that the Airbus A321-200 appeared to be in good condition. The Egyptian official, who spoke on condition of anonymity because he was not authorized to speak to the media, said he was a member of a technical inspection team that included two Russians. "We are all shocked. It was a good plane. Everything checked out in 35 minutes," the official told The Associated Press. The closest the plane came to being in trouble, he said, was three months ago when the pilot aborted takeoff halfway through because of a system error. "That's almost routine though," he said. However, a Russian TV channel late on Saturday quoted the wife of the co-pilot as saying her husband had complained about the plane's condition. Natalya Trukhacheva, identified as the wife of co-pilot Sergei Trukhachev, said a daughter "called him up before he flew out. He complained before the flight that the technical condition of the aircraft left much to be desired." Another Egyptian official had previously said that before the plane lost contact with air traffic controllers the pilot had radioed and said the aircraft was experiencing technical problems and that he intended to try and land at the nearest airport. Russia's air safety regulator on Sunday ordered Moscow-based Metrojet to temporarily suspend flights. Rostransnadzor, Russia's transport safety watchdog, said Metrojet needed to thoroughly analyze the situation and weigh all risks before authorities decide on Monday whether to lift the suspension. Despite the order, Metrojet said it will not fully suspend the flights of its six remaining A321s. It said it will check the planes one by one and continue operating them if they pass inspections. The conflicting claims couldn't be immediately explained. Egyptian analysts have begun examining the contents of two black boxes recovered from a Russian airliner that crashed in Egypt's Sinai Peninsula on Saturday, and said it could take days to retrieve the data.

Hundreds of people brought flowers and pictures to St. Petersburg's airport to commemorate the 224 victims of the Russian plane crash in Egypt. Elena Vikhareva, 48, came Sunday with her son to lay flowers, saying "pain is piercing her heart" even though she had no relatives on the plane. Vladimir Povarov, 19, brought flowers with a friend, saying "we couldn't remain indifferent." Other people were bringing planes made of paper, soft toys and pictures of the victims.
RELATED TOPICS