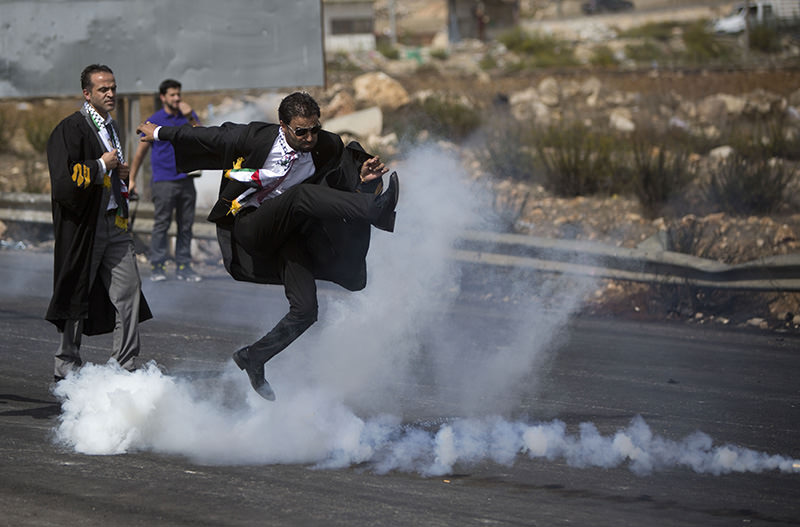 A picture of a Palestinian lawyer kicking away an Israeli tear gas canister has become a new symbol of current aggression between Israel and Palestine, revealing the extent of Palestinian frustration against Israeli violence

One of the most memorable images of the current Israeli-Palestinian confrontations shows a young Palestinian lawyer in dark shades, a suit and formal legal robe as he kicks away an Israeli tear gas canister, his legs flying high above billowing white gas.

Part of the appeal is the unexpected: Palestinians clashing with Israeli soldiers are typically masked stone-throwers in scruffy jeans, not nattily dressed professionals.

But Hassan Ajaj, the lawyer, believes the Oct. 12 image by Associated Press photographer Majdi Mohammed with more than 1.8 million views on one photo-sharing site alone also resonated because his spontaneous act of defiance expressed the extent of Palestinian frustration.

Many Palestinians say five decades of Israeli occupation hover like a dark cloud over every part of life, with Israeli restrictions imposed on even the most mundane activities people elsewhere take for granted, such as being able to drive to a beach or fly from the nearest airport.

"It shows that as a Palestinian lawyer, I am part of my people, part of the Palestinian wish for liberation," said Ajaj, 26, speaking in an interview Saturday at a rooftop restaurant owned by his well-to-do family in the West Bank town of Ramallah.

Yet Ajaj and his peers are also different from the generation that rose up against occupation in the late 1980s. Palestinian society was in transition then from rural to predominantly urban, most knew little about the wider world and uprising activists communicated through leaflets sent by fax.

Young Palestinians today tend to be more educated than their parents. More than 222,000 currently attend colleges and universities, or double what it was just a decade ago, out of 4.4 million people in the West Bank, Gaza Strip and east Jerusalem, the lands Israel captured in 1967.

Ajaj and his contemporaries are linked to the world through social media and their expectations are similar to those of young adults in Europe or the United States.

"Social media helped Palestinians compare themselves with other societies," said Ajaj, who practices criminal law. "They have a right to live like any other nation."

The current round of confrontations, one of many in the long-running conflict, erupted in mid-September.

It began with clashes between Palestinian stone-throwers and Israeli police at a major Jerusalem holy site that is revered by Muslims and Jews.

The unrest was driven by Palestinian fears that Israel is trying to expand its presence at the Muslim-run shrine. Israel has dismissed the claims as anti-Israeli incitement and says it is committed to a decades-old status quo that bars non-Muslims from praying at the site. But Palestinians point to growing demands for prayer rights at the shrine by Jewish activists and their political backers, including senior members of Prime Minister Benjamin Netanyahu's coalition.

Since then, 11 Israelis have been killed in Palestinian attacks, mostly stabbings, and 68 Palestinians have been killed by Israeli fire, including 42 said by Israel to have been involved in attacks or attempted attacks. Rights groups have accused Israeli troops of using excessive force in some cases, a charge Israel has denied.

Beyond the street confrontations, Israelis and Palestinians have fought for the dominant narrative.

The Israeli government and many Israeli media outlets have framed it as a "wave of terror" unleashed by what they portray as Palestinian incitement. They point to a stream of bloody videos and fiery speeches by Palestinian leaders circulating on social media. Palestinians say there's no need for anyone to incite, arguing that their day-to-day reality is infuriating as it is.

The violence erupted at a time when the road to Palestinian statehood through talks with Israel had been blocked for years. Netanyahu, in power since 2009, has said he is ready to talk, but he has rejected concessions made by his predecessors while expanding Jewish settlements. Palestinian President Mahmoud Abbas refused to negotiate under such conditions.

One of the flashpoints of the recent violence has been a traffic circle on the outskirts of Ramallah, near an Israeli army checkpoint. 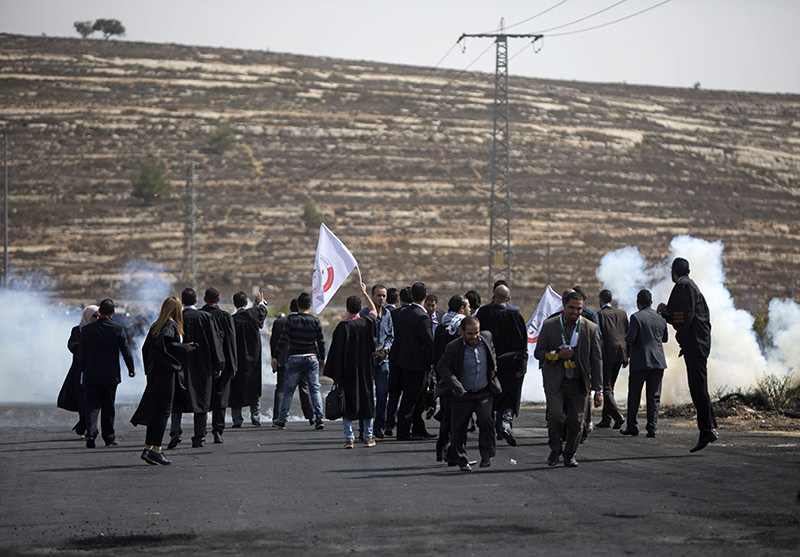 On Oct. 12, dozens of members of the Palestinian Bar Association marched from the Ramallah courthouse to the traffic circle for what Ajaj said was a peaceful march, without stone-throwing. Male and female participants wore formal attire, including suits and black court robes, said AP photographer Mohammed who covered the protest. 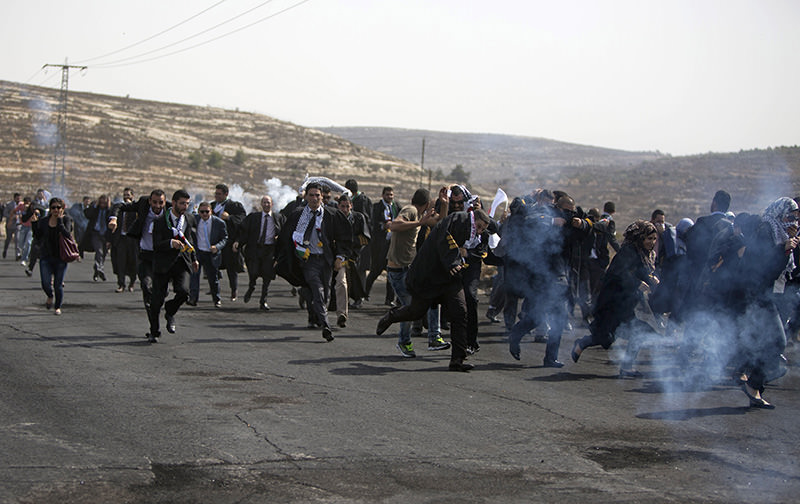 Israeli soldiers fired stun grenades and tear gas to stop the lawyers from advancing, said Ajaj. Some of the marchers were overcome by tear gas. His now famous punt was spontaneous. "I just wanted to kick it (the tear gas) away," he said.

Four days later, the website Buzzfeed said the image had been turned into a "huge meme" by users in a photo shop competition. Doctored photos portrayed him as a hurdler, rock star, dancer and field goal kicker.

Ajaj, meanwhile, was cautious when asked what he considers permissible protests against occupation.

"We are lawyers, we don't throw stones," he said, but added that he believes stone throwers have a role to play. He said he won't condemn those who carry out stabbing attacks, arguing that they were driven to such acts by Israeli measures, such as land confiscations and movement restrictions.

The "violence question" is rarely debated openly in Palestinian society. Abbas has repeatedly argued that armed attacks counter Palestinian interests and has instructed his security forces to try to prevent them, but has not condemned the recent stabbings in deference to popular opinion. Many Israelis believe that repeated rounds of violence over the years, including the current one, prove the Palestinians do not want peace with them.

Sam Bahour, a Palestinian-American business consultant and commentator, said the viral image of Ajaj in his lawyer's garb in a cloud of tear gas highlights that "the occupation is part and parcel of everybody's life."

But social media also plays a negative role, encouraging Palestinians to live in a virtual reality and romanticizing the idea of resisting occupation at a time when they lack a clear way forward.

"People are rightfully engaging in demonstrations and civil unrest, but sadly without a path to get them to an end of the occupation," he said.

The Palestinian district of East Jerusalem was captured by Israel in the 1967 Six-Day War, and since then Israel has tried to expand its influence over the neighborhood by allowing Jewish settlers to live in the disputed area. This comes after last year's Israeli attacks in the Gaza Strip in which more than 2,100 Palestinians died, including many civilians, according to Palestinian and UN officials.
Last Update: Nov 03, 2015 4:35 pm