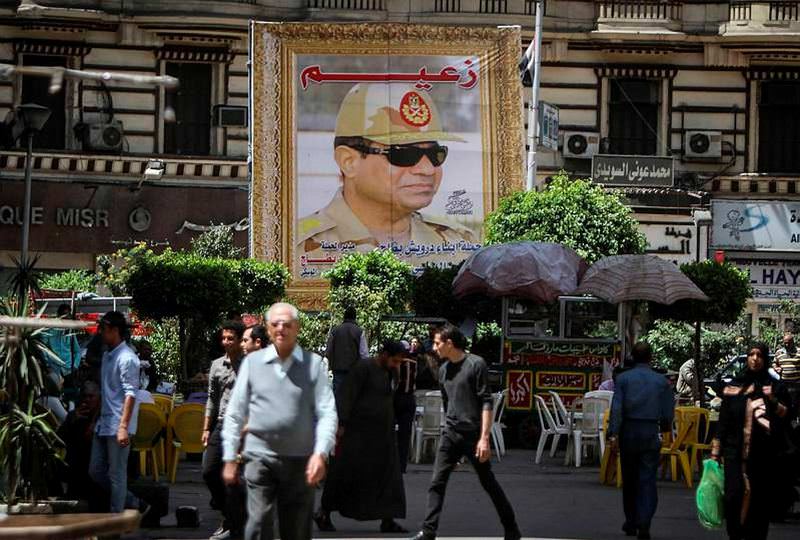 Egyptians walk past a poster bearing a portrait of retired army chief and current President AbdelFattah el-Sissi.
by daily sabah
Nov 03, 2015 12:00 am

A recent report, published by Human Rights Watch, revealed that scores of Egyptians have been banned from traveling by security forces. The ban resembles the travel bar, applied by N. Korea to its citizens

Egyptian authorities did not immediately comment on the report, which did not provide an exact number of people it said were blocked from leaving. The group said it documented at least 32 cases where security confiscated passports from activists and non-governmental organization workers. In many cases authorities have not returned the passports. "Many of those who experienced travel restrictions told Human Rights Watch that they were stopped at the airport while passing through passport control and interrogated by agents of the Interior Ministry's National Security Agency, formerly known as State Security. The agents then barred them from leaving the country, rarely offering a specific reason and often confiscating their passports," the report said.

In June, authorities confiscated the passport of Mohamed Lotfy, who heads the Egyptian Commission for Rights and Freedoms. He said he was scheduled to participate in a panel discussion in Germany about rights in Egypt at the same time that Egypt's President Abdel Fattah el-Sissi was visiting the country. He said he was stopped at the airport by security officials who told him he wouldn't be able to travel. "When I asked why, I was told, 'For security reasons.' When I asked what security reasons, they said I would know in due time," Lotfy said, adding that they would also not tell him whether he was under investigation. "It just seems that the security apparatus does not want Egyptian youth and Egyptian activists to have any connections with anybody abroad," Lotfy said. Egyptian authorities see international events like conferences and meetings as a "genuine threat to the security of the country," he said. Lotfy said he submitted a complaint to the prosecutor's office several months ago. He said he has yet to receive a response and authorities have not returned his passport.

The report said the travel bans are contradicting with Egyptian constitution and international agreements. "Article 62 of the constitution guarantees freedom of movement and states that 'no citizen may be prevented from leaving the state territory … except by a reasoned judicial order for a specified period of time and in the cases defined by the law." Article 54 states that anyone "whose freedom is restricted … shall have the right to file grievance before the court against this action.' Egypt has no laws that specifically regulate travel bans, but various decisions by the interior minister, some of which have been ruled unconstitutional, give unchecked powers to security agencies to stop citizens from traveling. Article 12 of the United Nations International Covenant on Civil and Political Rights (ICCPR), to which Egypt is a state party, states that 'everyone shall be free to leave any country, including his own.' Restrictions to this right must be provided by law and be 'necessary to protect national security, public order, public health or morals or the rights and freedoms of others.' Nevertheless, these restrictions 'must not nullify the principle of liberty of movement and are governed by the need for consistency with the other rights recognized in the covenant,'" the report said. The travel ban brings about the question of whether Egypt will remain as a closed country like North Korea which also bans its citizens from traveling abroad.