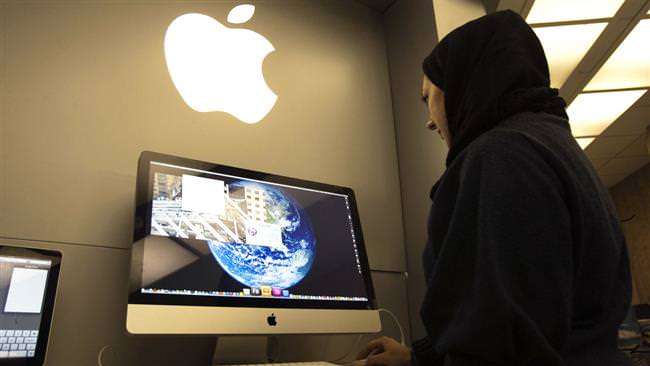 A woman uses an iMac computer in a shop at a mobile and computer shopping complex in northern Tehran on Jan. 18, 2011. (REUTERS Photo)
by Daily Sabah with AFP
Nov 05, 2015 12:00 am
Iran is banning the entry of U.S. consumer goods, the commerce and industry minister said Thursday, as the country prepares for a lifting of economic sanctions.

"In order to boost national production, it is necessary... to stop entry of American consumer goods and to prohibit products that symbolise the presence of the United States in the country," Mohammad Reza Nematzadeh wrote on his ministry's website.

The minister said the measure complies with a letter from Iran's supreme leader Ayatollah Ali Khamenei last month to President Hassan Rouhani calling for domestic goods production to be boosted.


Iran and world powers struck a landmark nuclear deal in July that will see a lifting of punishing economic sanctions on Tehran in exchange for limits on its nuclear programme, which prompted many U.S. firms and trade giants to take interest in the market potential of the Middle East.

Although the agreement was a great improvement of ties between Iran and the West, Tehran still remain 'decisive' on it's uncompromising stance against the U.S.

Supreme Leader of the Islamic Revolution Ayatollah Seyed Ali Khamenei,in a speech in August, had stated that it would not allow the U.S. abuse 'the outcomes of the nuclear talks', and nor any "American economic, political or cultural infiltration".