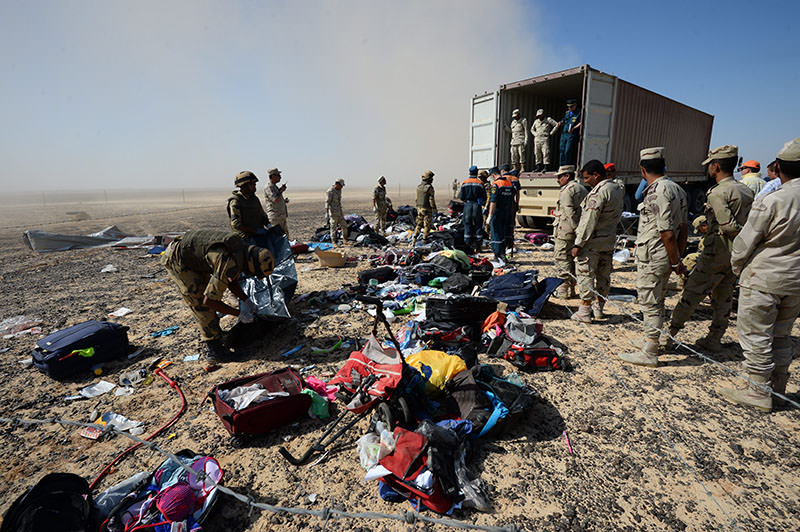 In this Monday, Nov. 2, 2015 file photo provided by Russian Ministry for Emergency Situations, Egyptian soldiers collect personal belongings of plane crash victims (AP photo)
by Nov 07, 2015 12:00 am
Egypt pushed back on Saturday against international suspicions a bomb downed a Russian plane in the Sinai, as intensifying restrictions on air travel threatened to cripple its vital tourism industry.

In the Red Sea resort of Sharm el-Sheikh, from where the doomed airliner took off on October 31, thousands of Russian and British tourists waited anxiously for word of when they might be able to fly home.

Moscow on Friday halted all Russian flights to Egypt and London has stopped British flights to Sharm. Empty aircraft are to be sent out to bring home stranded holidaymakers but the process will be slow.

Sources in France close to the crash probe told AFP that black box data pointed to a bomb having gone off and a sudden, violent demise of the Airbus less than half an hour after takeoff.

British Prime Minister David Cameron has said that a bomb "had more likely than not" been the cause of the explosion in which all 224 people on board lost their lives.

But Egyptian Foreign Minister Sameh Shoukry said on Saturday the Egyptian-led inquiry into disaster had yet to establish any theory about the cause.

"We have not dismissed any possibility but there is no hypothesis yet, before the investigations are over and a full report is ready," Shoukry said.

He said that foreign intelligence that had triggered the international travel restrictions had not been shared with Egypt.

"We expected that any technical information should have been shared with us, at a technical level, before publicising it in the media," he said.

Already battered by years of unrest, Egypt is heavily reliant on tourism revenues and fears the impact any firm determination that a bomb caused the crash would have on the key industry.

Russians make up the bulk of tourists who visit Red Sea resorts such as Sharm el-Sheikh each year, and nearly 80,000 are currently holidaying in the country, a Russian official told AFP.

Empty aircraft will be sent to Egypt to bring them home after President Vladimir Putin's decision to halt Russian flights but the repatriations will be spread over the coming fortnight.

"Tourists will be returning from Egypt to Russia when they planned to," said Deputy Prime Minister Arkady Dvorkovich, who heads a task force established to oversee their return.

"Most people left for two weeks -- our usual holiday tour lasts two weeks -- therefore they will return in about two weeks," he said.

Russia followed in Britain's footsteps, saying that holidaymakers would be returning home without their hold luggage, which will be brought back to the country separately.

That restriction has prompted Egypt to limit the number of daily repatriation flights because it says there is only so much left behind baggage its airports can accommodate.

At Sharm airport, one bemused Russian tourist stared at the departures board trying to figure out when she might be able to fly home.

"An hour ago my flight was there but now it disappeared," Yulia Suvorova said.

British airlines said they expected to operate seven repatriation flights on Saturday, only enough to make a small dent in the 19,000 Britons still in Sharm.

There were tears of relief as the first returning passengers landed in London's Gatwick Airport on Friday after days of delays.

"I'm so grateful to be home with my family. I didn't think we would come back," said Emma Turner, 34, from Kent in southeast England.

Kremlin spokesman Dmitry Peskov told news agencies the decision to restrict flights did not mean Moscow believed the crash -- the worst aviation disaster in Russia's history -- was due to an attack, and the investigation continued.

The head of Russia's emergencies ministry said Russian experts had taken samples from the crashed jet and were testing it for any traces of explosives.

A source in Paris close to the investigation told AFP the black box data "strongly favours" the theory a bomb on board brought down the plane.

Another person close to the case said the plane had suffered "a violent, sudden" end, saying: "Everything was normal during the flight, absolutely normal, and suddenly there was nothing."

The ISIS terrorist group said it downed the plane in retaliation for Russian air strikes in Syria, but has provided no details as to how. ,

If it was behind the attack, it would be the first time the terrorists, who control large areas of Syria and Iraq, have hit a passenger plane.

US President Barack Obama has said that Washington is "seriously" considering the possibility of a bomb aboard the plane.

Homeland Security Secretary Jeh Johnson said security screenings of US-bound flights from some Middle East airports would be stepped up as a precaution.

Once a remote beach on the edge of the Red Sea, Sharm el-Sheikh has grown into the jewel of Egypt's tourism industry, with dozens of luxury hotels and night life attracting tourists from around the world.