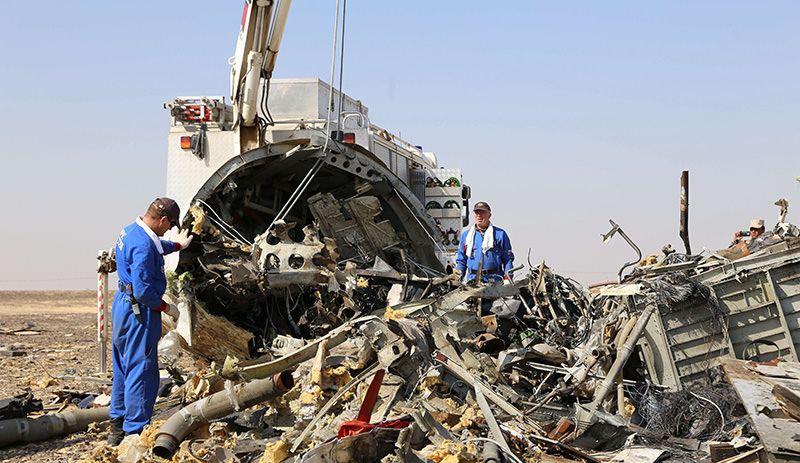 Russia's Emergency Ministry shows Russian emergency services personnel working at the crash site of a A321 Russian airliner in Sinai Peninsula (AFP Photo)
by reuters
Nov 07, 2015 12:00 am
Cockpit information from the Russian jet which crashed in Egypt's Sinai Peninsula one week ago registered a noise in the last second of recording, the head of an investigation committee into the disaster said on Saturday.

But the committee head, Ayman al-Muqaddam, said experts were still gathering information and it was too soon to announce conclusions.

Western governments have said the crash of the Airbus A321, which killed all 224 passengers, may have been caused by a bomb and several countries have suspended flights to the Red Sea resort of Sharm al-Sheikh from where the Russian plane took off.

Muqaddam said the crash occurred 23 minutes into the flight, when the auto-pilot was still engaged, and debris were scattered over a wide area extending for 13 km (8 miles) "which is consistent with an in-flight break-up".

"Initial observation of the aircraft wreckage does not yet allow for identifying the origin of the in-flight break-up," he told a news conference in Cairo.

The committee was analyzing the cockpit voice records, and a noise was heard in the last second of the recording, he added.

"A spectral analysis will be carried out by specialized labs in order to identify the nature of this noise."

Referring to media reports citing Western intelligence sources pointing to the possibility that the plane was brought down by a bomb, Muqaddam said no evidence related to those claims had been provided to his team.

"The committee is considering with great attention all possible scenarios for the cause of the accident and did not reach till the moment any conclusion in this regard."